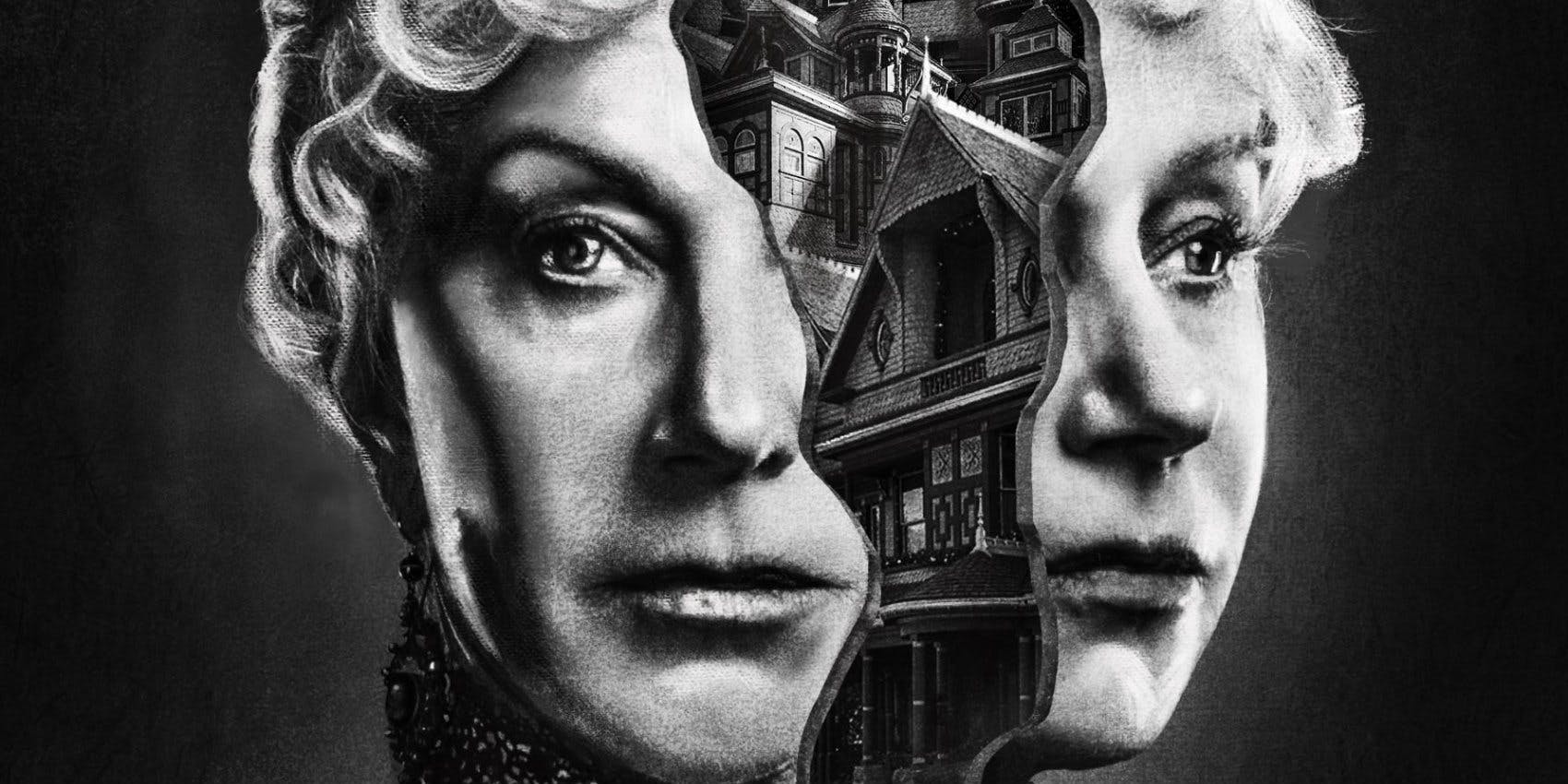 Leave it to Hollywood and a bevy of male screenwriters to take a darkly fascinating story of a complex, troubled woman and turn it into a movie about a Liam Neeson look-a-like. The film is a fantastical adaptation of the real-life story of Sarah Winchester, an eccentric widow and sole heir to the American rifle fortune. And by fantastical, I mean not very good. But we’ll get to that.

First, the history. If you are like me and spend all your free time in bed trawling through the creepiest historical stuff you can find, the story of Sarah Winchester is quite the nightcap. She was born in 1840 in New Haven, Connecticut, and married William Winchester, the son of the inventor of the Winchester Repeating Rifle (worth over five hundred million dollars in today’s currency). Over the next ten years, Sarah’s husband, daughter, and father-in-law died, leaving her alone, stricken with grief, and flush with money.

This is where history and myth become indistinguishable. The history: Sarah purchases an eight bedroom ranch house in San Jose, California. Presumably fueled by a fascination with architecture and the distraction from her mourning, she begins 24 hour a day construction on the house, which, at the time of her death, totaled some 90 bedrooms, 7 stories, 13 bathrooms, and many odd architectural features, most notably stairs leading to nowhere. 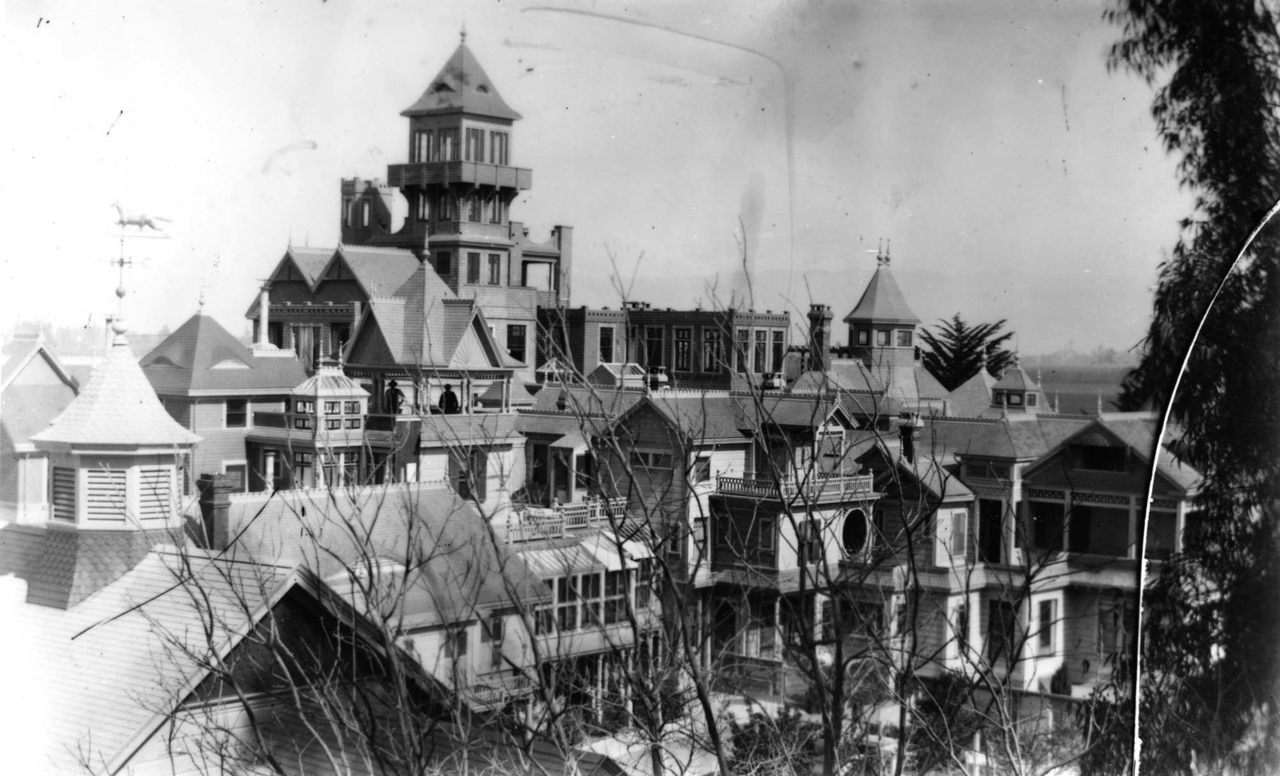 A photo of the Winchester house from 1906

The myth: haunted by bad dreams and omens, Sarah visits a psychic in San Francisco, who reveals that she is cursed by the souls of everyone who was killed by a Winchester rifle. The only way to appease the spirits was to purchase a house and never allow the construction to cease. Sarah became increasingly reclusive and eccentric, rarely leaving her house. Servants reportedly see her playing piano as if in a fever pitch, controlled by malevolent forces. I visited in 2013, and it was indeed a truly creepy place. I wanted to know more about Sarah Winchester - her rich inner life, her potentially convulted relationship with the spirit world and the occult, what it’s like to have three close family members die. I wanted to see what a 1860s San Francisco spiritual medium’s office looked like.

Unfortunately, Winchester bears very little resemblance to either legend or history. What do we get in this movie? Bland screenwriting, one-dimensional characters, and a mysterious dearth of screentime for Sarah Winchester. Instead of actually delving into nuances of Sarah Winchester as a person, the audience is given a new main character: Dr. Eric Price, a cynical doctor with a tortured past. The Winchester company hired Dr. Price (played by Jason Clarke) to psychoanalyze Sarah Winchester, hoping for a diagnosis of mental instability  Any hope I had of seeing what a psychic medium looked like in the 19th century was erased within the first five minutes of the movie. The audience’s first introduction to Eric is a scene of him hanging with some Victorian-era prostitutes, listening to music, and shooting opium. (A doctor addicted to opium! How oxymoronic and interesting!) He is hired by the Winchester company to assess Sarah Winchester’s mental stability, in a ploy to remove her as the sole proprietor of the company. Sarah, on the other hand, is struggling with the increasingly foreboding presence of spirits in her house, who threaten the safety of her daughter-in-law and son. What follows is some ninety minutes of hopelessly uninteresting dialogue and a magnificent waste of Helen Mirren’s talents. The suspense and horror of the movie amount to little more than jump-out-and-scare-you special effects and well-timed crescendos.

Even worse, the audience is forced to endure far too many snippets of so-called wisdom that Dr. Price imparts to the women around him. There is something supremely frustrating about sitting through yet another narrative that revolves around a man conferring “sanity” or “insanity” to a woman, or emboldening her to do something besides cry and victimize herself. Examples of these platitudes include: “Don’t let fear control you. You can be a fighter,” or “We all have the ability to shape and control our own reality, but for you, that means letting go of the past.” Fascinating.

It does bring an interesting trope to light though: the contrast of Dr. Price’s terse skepticism to Sarah Winchester’s fervent belief in ghosts and the supernatural. The trope is interesting in that it is excessively played out. Woman as connection to divine, man as doubting Thomas. It is a double-edged argument: one one hand, the most interesting stories are the ones we have never heard. On the other hand, there will always be a place for the classic and the familiar. But whether a book, film, or story becomes a classic or just another knock-off depends largely on the ability of its creator to provide a fresh perspective and emotional relatability. The beauty of fiction is its potential to give voice to the underdogs of history, the people whose story has not yet been told. Winchester, for all the promise of its premise, succumbs to grossly tasteless flights of fancy, and misses what makes the story of Sarah Winchester so compelling: the soul of it all.