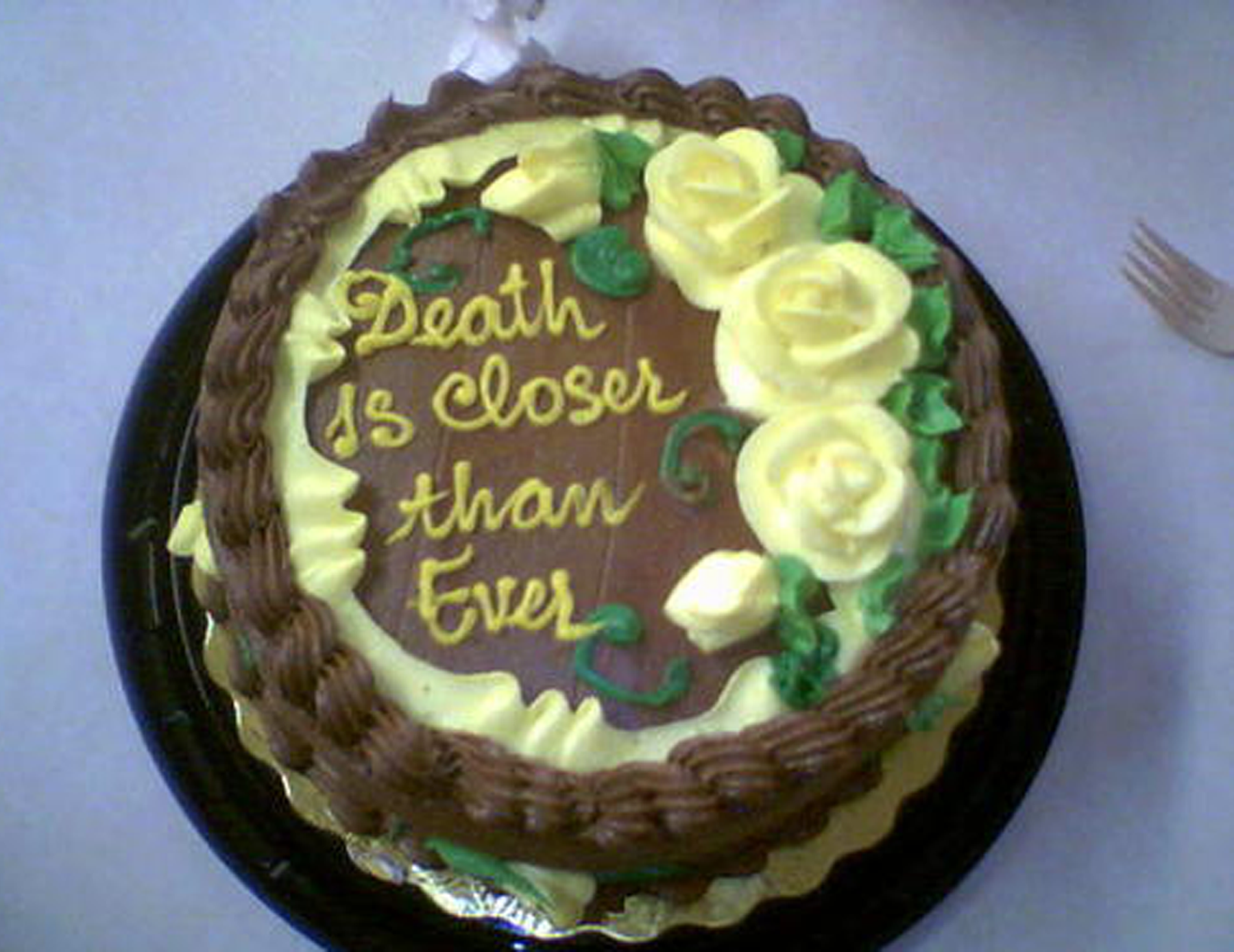 To be honest, I’ve never really been into my birthday. Not since I was like, ten. There is nothing particularly special to me about demarcating the day that my mother pushed me out from between her legs while my father fed her ice chips in a hospital in Raleigh. It’s not like I did anything to make it happen. I didn’t ask to be born. I had literally no say in the matter, which seems eternally unfair. I tell my mother this sometimes, when she asks me if I’ve thought any more about committing to a specific career path. Commit to a career? Are you kidding me? How am I supposed to do that when I can’t even fully commit to the idea of being alive?

When I say this, she laughs, and says, You’re so funny! Have you ever thought about becoming a comedian?

(The answer is yes. But I can’t commit to that either.)

My birthdays have been pretty much downhill since I turned ten. That year, I had my friends over to build teepees in the woods behind my house, then eat ice cream cake from Food Lion. We wore Hello Kitty party hats that matched the streamers on the deck. It was beautiful. It was pure. And most of all, I wasn’t worried about my mortality, the aging process, how to set healthy boundaries, and whether or not I should go grocery shopping later. I was only thinking about ice cream cake.

I always try to repeat the purity of this experience on subsequent birthdays. But it’s never quite the same. Which is not say that that they aren’t good (many of them have been quite fun). They just tend to be more...existentially charged than I’m comfortable with. With each birthday, I must confront the fact that I am not ten years old anymore. When I turned twenty-two, I woke up in my then-boyfriend’s bed. He asked me where I wanted to go for breakfast on my special day, and I burst into tears.

“Nothing,” I whimpered into his sleeve.

“Well, what’s wrong?” He was clearly weirded out, but trying not to show it.

“I don’t know!” I wailed. “It’s like… one minute you’re ten, and then the next minute you’re old enough to sleep with someone without telling your parents, and they care about you enough to take you out to breakfast, which is so nice, and I love you for that, but also I’m not twenty-one anymore, and I’ll never be twenty-one again, and all it’s just too much!” I burst into a fresh round of rib-wracking sobs.

“Ohhhhhh-kay,” he groaned, rolling his eyes and detaching himself from my snotty, whimpering little frame. “Can we please go eat? I’m so hungry.”

I stared at him hatefully. “I’ve lost my appetite.”

I got in my car and drove home. I don’t remember what I did for the rest of the day.

The year I turned twenty-three, I had a different boyfriend, who spent $80 on liquor at the bar that night and told me that the most annoying thing about me was how I always act like I have all the answers. I had one beer and drove both of us home, then watched him fall down in my driveway and thought, maybe I do.

I was lying in bed last week thinking about all this. It was a chilly night for the middle of April, and I opened my windows to catch the breeze. I’ve moved into a new apartment since my last birthday, one with a clawfoot tub and a view of the trees in the morning light. This year, it’s the same thing as last year, and the year before. I’m not ten anymore. Another year has passed, and my life is nothing like what I thought it would be like when I was younger. If you had asked me at that birthday party what I thought I would be at the age of twenty-four, I would have been like, “MARRIED OR DEAD” while shoveling ice cream cake into my mouth. Back then, twenty-four sounded like marriage, mortgage, a long-term savings account. It sounded like finding a gray hair, dinner parties with wine, and knowing what I wanted from myself and everyone else. It sounded like being a grown-up.

And now I’m here. I’m arguably a grown-up. But I don’t feel like one. I don’t have the mortgage, the marriage, or anything of the other signifiers that I assumed I would passively accumulate. All the younger versions of me still alive somewhere inside my brain, clamoring for clarity and confused as to how we got here, and whether or not we can leave. Most of the time, I feel like a fifteen-year-old trapped in a twenty-four-year old’s body, and I still haven’t figured out how to maturely negotiate that fact. A few weeks ago, I slept with someone new, and I was like, I can’t believe this is happening! I didn’t even know you two weeks ago!

I said this while he was inside of me.

He stared at me, and said, “Can you stop editorializing an experience while we’re still having it?”

Busted. Am I ever going to feel at home in my life? Is it ever going to feel like it’s really mine? Probably not. Maybe that’s okay. I never bother to plan for my future, because I always assume that it will just, I don’t know...happen? And it has. The future is here. I’m living it. It’s all happening. It’s just different than what I imagined. Since graduating college, I’ve done a whole lot of nothing. I’ve gone through jobs and relationships like water, and I’m no closer to knowing what I want. I’ve volunteered, taken classes, worked in restaurants. I’ve gone to bars on Tuesdays, cried in my car, and drunk gin and tonics in the bathtub alone. Sometimes, it feels like escaping. And sometimes, it feels like the most alive that I know how to be. Maybe the most I can ask is to sit with my own uncertainty, and trust that beauty, catharsis, and comfort will come. And they always will, just usually when you least expect it.

One of my favorite memories of the last few months was when I called my best friend after the most painful breakup I’ve ever had. I went over to her tiny attic apartment and immediately fell asleep in her bed while she folded laundry. I woke to the smell of coffee, and “California” by Joni Mitchell playing softly from her computer. I was completely exhausted, but in a way, I was the happiest I’d been in months.

This year for my birthday, I was mostly alone. I slept in, then made myself an enormous breakfast. I bought myself a facial, got a haircut, and went out for dinner. I was in bed by 11:30, reading a new book while plucking the hair from between my eyebrows. The next morning, I had a text on my phone asking if I was hungover. I laughed, and then put on the kettle to make coffee.