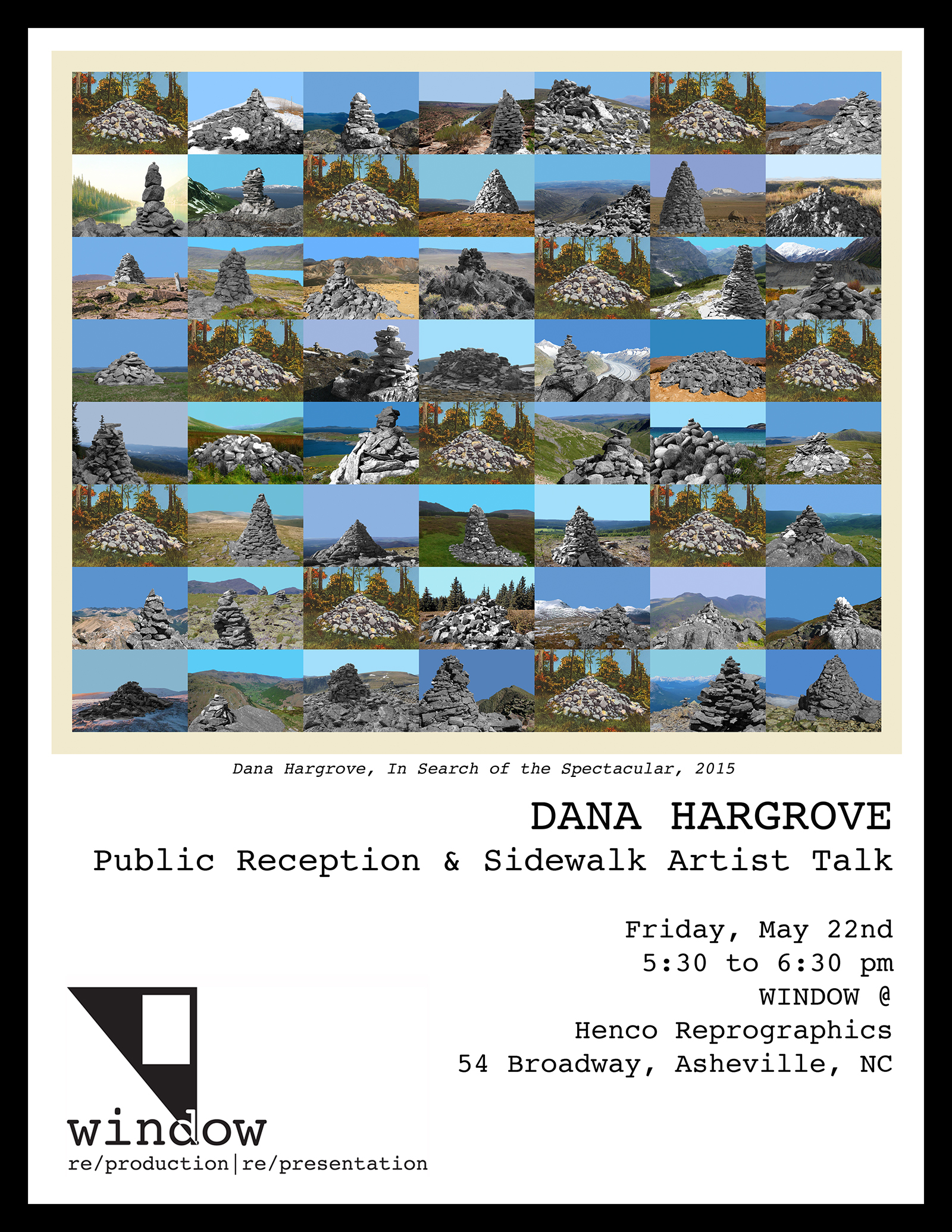 This Friday, the public has an opportunity to engage in conversation with Florida-based artist Dana Hargrove during a "Sidewalk Art Talk" in front of her new piece, created specifically for Window (re/production | re/presentation). In Search of the Spectacular combines Hargrove’s long-standing interest in culturally mediated landscape with her recent fixation on the cairn as a repetitive and cumulative marker of our encounters with the land, and by extension, with one another. Originally hailing from Scotland, Hargrove’s work is heavily influenced by her own experience of trail walking which is somewhat critical of the contrived accomplishment associated with reaching a summit, or conquering a difficult pass. “Placing a stone on a cairn marks that achievement, but does it not also state a sense of ownership of the view, much in the same way a tourist’s snapshot of the scene would do?” (Hargrove)

Dana Hargrove. “Aspect Forming” (installation view) 2014. Bridget Mayer Gallery, Philadelphia, PA.
Admittedly influenced by early conceptual works, Hargrove aligns herself with Robert Smithson, when he expressed in A Tour of the Monuments of Passaic, “Actually, the landscape was no landscape [but] a particular kind of self destroying postcard world of failed immortality and oppressive grandeur.”1 Furthering this view, Hargrove deliberately employs the trope of the postcard in the work.  An anchoring image is a “1930-1945 postcard image of Thoreau’s cairn - both the cairn and the postcard are a memorial to the naturalist and transcendentalist Henry David Thoreau. Admiring pilgrims began the cairn 10 years after his death beside his former home at Walden Pond.” (Hargrove)

Dana Hargrove. “In Search of the Spectacular (Detail), 2015.
Positioning the image of a cairn as a type of trophy, In Search of the Spectacular uses the framework of the grid to emphasize the sameness of these forms, creating a monotonous, undulating pattern. Inspired by vintage Swiss Alps tourism posters, the skies have been rendered as a series of flat yet vibrant blues, while the cairns remain in gray scale, the graininess suggesting their point of origin as deriving from reproduced sources. In this work, Thoreau’s cairn along with the other decontextualized piles of rocks have been repurposed to serve as homage to another artist whose mythology is forever associated with the landscape, Bas Jan Ader.  Hargrove titled her piece after Ader’s work, In Search of the Miraculous, "which claimed his life in 1975 as he sailed out in his skiff to cross the Atlantic, never to reach the other side. In Search of the Spectacular acts as a repetitive monument, to the artist, to the myth that surrounds him, and to nature’s capability to swallow egos whole, regardless of our attempts to claim its aesthetic.” (Hargrove)

ABOUT THE ARTIST
Dana Hargrove was born in Edinburgh, Scotland and currently resides in Orlando, Florida. Hargrove concerns herself with ideas that frame perceptions of the land and sense of place and space. She employs a range of media including photography, collage, sculpture, and painting, often installed as large-scale, site-specific works. Represented by the Bridgette Mayer Gallery in Philadelphia, she continues to exhibit her work both internationally and nationally. She has recently exhibited her work at: Atlantic Center for the Arts’ alt_space Gallery (New Smyrna, FL), Cornell Fine Arts Museum (Winter Park, FL), Bridgette Mayer Gallery (Philadelphia, PA), Emerged (Glasgow, Scotland) and Greatmore Studios (Cape Town, South Africa). She has received several awards including the National Young Painters Competition First Place Award, full artist-in-residence fellowships at Vermont Studio Center, CentralTrak Artist Residency at The University of Texas at Dallas, and Greatmore Studios Artist-in-Residence in Cape Town, South Africa.
Dana Hargrove is an Associate Professor of Studio Art at Rollins College, Winter Park, Florida. She earned a Master of Fine Art from Southern Illinois University Carbondale, IL and a Bachelor of Fine Art in Painting from Duncan of Jordanstone College of Art, Dundee University, Scotland.
http://danahargrove.com/

ABOUT THE PROJECT
Conceived of as a site-specific minimalist exhibition space, Window (Re/production | Re/presentation) aims to stimulate thoughtful discussion around timely issues of representation within contemporary art in the local community and beyond. Window exhibits the work of contemporary image makers who engage with issues of re-production and re-presentation within their practice via philosophical, theoretical, poetic and/or process-based frameworks. Window is generously hosted and sponsored by Henco Reprographics in downtown Asheville.
http://windowcontemporary.org/