An Update from the Asheville Buskers Collective

An Update from the Asheville Buskers Collective 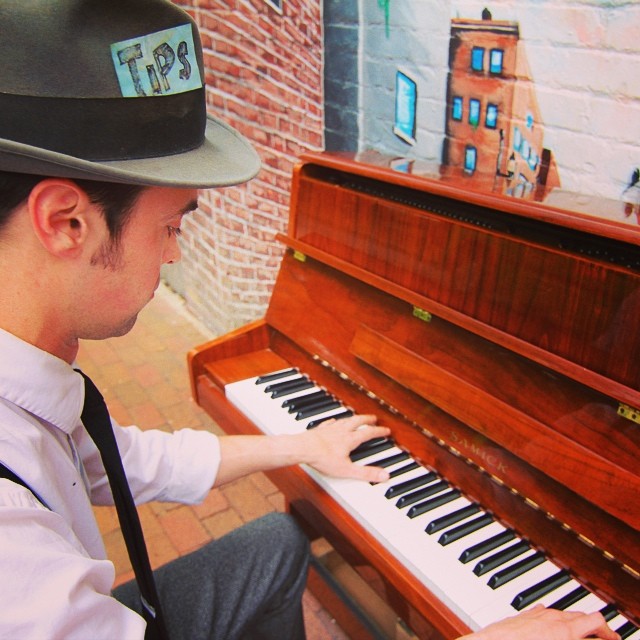 By Andrew Fletcher, performing here at 5 Walnut in Asheville

Hello everyone. On behalf of the Asheville Buskers Collective I’d like to say that we are pleased to be an essential part of this conversation about the future of busking and street performance in downtown Asheville. We’d like to thank Meghan Rogers and Byron Griener of the Asheville Downtown Association, John Fillman, Sgt. Stepp, and the members of the city staff who have heard our concerns, as well as Councilman Jan Davis and the members of this committee who last September encouraged this opportunity for constructive dialog.

Let me introduce myself. My name is Andrew Fletcher, I play 1920’s jazz piano and today I represent the Asheville Buskers Collective. I’ve performed everywhere from Pritchard Park, Pack Square, and Bele Chere to the Orange Peel and the Kennedy Center for the Performing Arts in Washington, DC. Lots of people recognize me from having a specially built piano just for busking, but I’m rarely active on the street these days. I’m coming up on nearly 1,000 performances in the past 5 years, the majority of which have been local. Asheville has been very good to me and I will always credit this city with getting me started in my music career. I have to say that the opportunity that has helped me thrive and grow here that I cherish the most has been the ability to play my music on the street, and that is why I come before you today.

First, I would like to talk about what busking is NOT.

Busking is NOT illegal or otherwise poor behavior.

Busking is NOT littering, loitering, or letting your dogs defecate on the sidewalk, as I’ve heard more than one downtown resident complain. Buskers step in it too you know.

And most important for today, busking is NOT panhandling.

Busking is the public performance of an art for passersby, that will, fingers crossed, result in a donation that encourages the artist to continue their craft.

Busking is an aspect of city life all over the world and only thrives when people and business thrive as well. Asheville street culture has thrived alongside Asheville businesses and we aim to keep it that way.

Finally, busking is a vital part of what makes Asheville a unique place that people want to live, work and to visit.

Now, we need some clarity about how to move forward, and we have some ideas for you to consider.

What we seek to accomplish as a group at this moment:

The Asheville Buskers Collective is new, not yet a year old. But already we are seeing signs of success.

Here’s an example of how the buskers coordinating avoided a problem without the use of city resources. Just Saturday night, a member of the collective was performing very successfully on Pack Square. The crowd attracted spilled into the street. Another busker, a face painter located nearby, saw this, approached the crowd and asked them to move back to a safe location. The people in the street complied. A year ago, this wouldn’t have happened. This is progress.

No city resources were used to deal with this. This is a perfect example of coordinated good behavior amongst buskers and how it contributes to minimizing the use of city resources, particularly the hard working members of the downtown police unit who we know are understaffed at this time.

One concern that we have, and that we have observed many times, is that talented performers, often from out of town, can be misidentified as troublemakers because of their appearance. We feel that in almost all cases where legitimate problems occur they do not stem from the performance itself, but from some other unacceptable behavior that is happening at the same time. For instance, we do not think that holding a guitar is a license to litter. Conversely, we do not think that the police are watching someone litter, and then wait til they pick up a guitar to confront them about littering. Problems with a dog? We’ve already got laws for that. Problems because of excessive noise? We’ve got laws for that. Problems with non-performers loitering? We’ve laws for that too. We say treat a litterer like a litterer and treat a busker like a busker, and put it in the law.

I’m not going to lie, there has been increased tension the past few months and the topic has become politicized. Without clarity the tension and politicking may increase as the tourist season comes into full swing. There have been cases where buskers knew the law more accurately than the officer approaching them, and there have been instances where the officer knew the law better than the buskers. We can work together on this to make the laws clear and consistent. When police and buskers both know what is acceptable and successful behavior, we will all benefit.

We need you to encourage city staff and the police to work together with us, both individually and through the Collective.

When the police and buskers are both freed from the ambiguity of the current ordinances, we will see city resources and police time minimized, we will see the best buskers flourish and the rest strive to rise to their level and all will continue to entertain and brighten the lives of tourists and residents.

Busking is a fundamental type of public art - it’s the canary in the coal mine for the cultural vitality of a city and we need your help to protect it. While the right to perform in public is clearly tied into the right to free speech guaranteed across our nation, creating the environment that allows the best buskers to be successful can only be brought about by thoughtful rules that treat buskers as valuable cultural resources who contribute aesthetic as well as economic public benefits to the community. Though difficult to quantify, we hope that you appreciate the quality of our contributions to our shared well being.

Groups like buskers that contribute public benefits often get special treatment - churches, non-profits and the like are fostered by public policy so they do not go extinct. We ask that you think of street performers as providing a similar public benefit. As proof, we point to the public who have voiced immense support for street performers here, and the tourists flock here in droves with cameras and leave with fond memories - and plans to return.

In every city where a busking scene exists, performers come and go all the time. We have performers here who could be successful street performers anywhere in the world, but they choose Asheville because they can succeed here. I am here to say that the Asheville Buskers Collective is committed to working with the City and making that success sustainable into the future.

We’ve got talented people all over this city, even on city council. We invite you all to give busking a try. It can be an incredibly fun and gratifying experience. Just learn the rules, respect your neighbors, and please keep your amps at a reasonable volume.