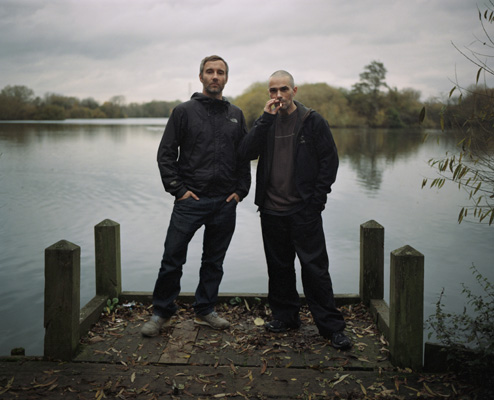 Massively influential electronic duo Autechre are gracing The Orange Peel with their conceptual, abstract, and always enthralling sounds this Thursday, October 8. Since the late 1980s, the British-born pair has been shifting the way we think about what music is, how it’s made, and where it’s headed. Calling them pioneers would be an understatement, and seeing them live is a must for anyone in traveling to the cutting edge of music.

Autechre (Sean Booth and Rob Brown) formed in the Manchester area of England, and their industrial, urban beginnings are still prominent in their sound, even as it’s become more experimental and stripped-down. Famed for their use of analog and digital tools to create music, they have consistently released full-length albums every two to three years that showcase their ceaseless innovation. Their enthralling, transformative shows come around even more infrequently, and are a must for anyone interested in underground electronic music, the relationship of humans and technology, or the innermost processes of the mind.

2013’s Exai (Warp Records) is an album that unfolds upon repeated listening, weaving rhythms together in ways that feel simultaneously totally manufactured and completely organic. Listening to an Autechre track, I often have the sensation that I’m witnessing the emergence of an intelligent technology, a true A.I. There’s a palpable darkness to their music, but one that’s never oppressive. Rather, it’s like exploring a vast room without light. Minute details emerge first in each song, and rhythms build and break, carrying you along with them. Eventually there’s a moment of coalescence, but it tends to dissolve almost as quickly as it manifests. Listening becomes about the experience of listening. The inescapable tendency for the human mind to create narrative, even when there is none, finds a welcome challenge in this music. This inability to find—or keep—a storyline is reflected in the puzzle-like song titles themselves. Songs on Exai are titled, for example, “bladelores,” “YJY UX,” “nodezsh,” and “Flep.” This is not to say you can’t ever locate a narrative. In fact, sometimes songs can be hugely visual, even world-building experiences. One of these for me is “Second Peng,” off the 1995 EP Anvil Vapre, a track that, despite its impenetrable title, invariably conjures in me visions of a distant planet populated with a race of giant spiders (no kidding).

Autechre clearly sets out to challenge listeners, but the curious are rewarded with unexpected moments of great beauty that are all the more powerful because they’re not necessarily foreseen. Exai’s “bladelores” is one of these, a gorgeous, haunting track that is all the more powerful for its minimalist approach to sublimity. Situated approximately at the midpoint of the album, it’s like an artifact from a half-remembered dream that follows you back into reality, an experience of luminescence that lingers, a ghostly trace in the face of a dark world.

Given all of this, how would one approach a live show? If Autechre is best sipped slowly, repeatedly, and perhaps even alone and in the dark, what does a performance have to offer? The rarity of a live performance from Autechre might be enough to get you to the show. But even more important: as others have pointed out, a live Autechre show is like no other. It’s a constant conversation between the duo and their audience—a shifting, evolving performance that, like an organism, responds to its environment. And this goes both ways. As Autechre feels into the hearts and minds of the crowd, the crowd itself is changed, moving alongside the music on a path of inquiry into full, immersive experience. This, admittedly, can be a difficult encounter, at least initially, because listeners have to learn how to hear in a new way. Clash notes that “It’s a punishing opening 15 minutes until your mind relaxes and starts to learn their radical musical language.” As Autechre defies convention, the audience itself is taken to a new level of connection with sound. It’s a revolutionary kind of growth, a sonic unfolding that puts human and machine in conversation and then sits back to watch what happens.

Intrigued? You should be. cygnus and Rob Hall open. The show starts at 9, doors at 8. Tickets are $25 in advance. See you there.