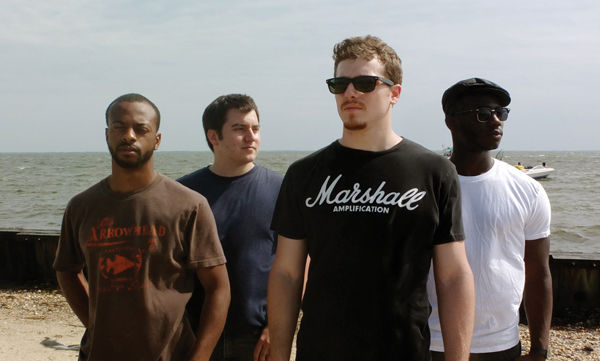 As music lovers and concert-goers in this area can tell you, Asheville may be a small little town nestled in the beautiful mountains of Western North Carolina, but it boasts a huge musical footprint.  Sometimes, us live music lovers have more shows that we can possibly go to!  But luckily that amounts to one of those "good problems" and it's a challenge many of us are up to on a nightly basis.

Charlie Traveler Presents is a Promoter of music in Asheville, putting on concerts at all of the various, beautiful venues the town has to offer.  CTP has been doing this for years in Asheville, previously under the name Geniass Productions, and has spent years bringing wonderful artists to Asheville and producing awesome musical happenings.  As such, CTP has a wealth of intimate knowledge of the local scene and offers up some picks of great concerts coming to Asheville.

Whoa. This is complex, intriguing and challenging music to listen to. And also wonderful. This is something new for most folks, but if you're into hearing something completely different and truly testing your listening boundaries, look no further. Frode Gjerstad is a name that many of us folks here in America are probably not familiar with, but he's an internationally known and respected jazzman, notably for his take on "free jazz."  After two decades of trios with various international musicians, this is Frode's first all-Norwegian trio and it is a significant move towards a Nordic improvised sound. In the past, he has played in trios with Hamid Drake, William Parker, John Stevens, Johnny Dyani, Kent Carter, Wilber Morris and Rashid Bakr.  This is the kind of show that fits perfectly into a cozy Sunday evening in Asheville!  If you're looking for more mainstream Jazz, just walk a few steps to Isis, they are producing excellent jazz shows every single Sunday.  In fact, you could probably go to both!

The Main Squeeze is a "raging funk experience born within the thriving live music scene of Bloomington, Indiana, and currently residing in Chicago, IL."  That pretty much sums of what I've seen from this young band, easily one of the best and most exciting live acts I've seen developing in the last few years.  These guys are incredible musicians who put on an equally incredible live show, centering around the amazing charisma, soul and voice of lead singer Corey Frye.  If I could pick one band not to ever miss if you get the chance, it would be The Main Squeeze.  My words here really can't even do their live show justice, it has to be seen in person. Some recent accomplishments from this young band include... winning an international battle of the bands in Macau, China against bands from all over the world and being handpicked by Rolling Stone magazine to open for The Roots and Janes Addiction at the official Superbowl XLVI tailgate party in Indianapolis.

Flow Tribe is a psychedelic funk band from New Orleans, "fine purveyors of backbone cracking music," who have wowed crowds all over the world.

Deja Vu: A Tribute to Crosby, Stills, Nash, and Young

Who doesn't love the music of Crosby, Stills, Nash and Young?  Many of us grew up listening to the sweet sounds of those four men who appear to have been born to sing together.  Athens, GA based music producer John Keane (REM, Widespread Panic) has assembled a "supergroup" of Athens based musicians to round out his Tribute to CSNY, including Dodd Ferrelle, Rachel O’Neal, Tom Ryan, and Deane Quinter.

Although it can be quite a challenge to embody the music of this group, obviously I'm talking about the vocals, this Tribute band is up to the task:

Dopapod has firmly planted itself as one of the brightest up and coming bands in live music today.  Their live show is the perfect combination of musicality, improvisation and downright skill, perhaps that's what led Hype magazine to call them one of the "50 greatest live acts right now."  When this band starts playing it leaves the viewer enthralled, there's just no way around that, they mesmerize you with their psychedelic jams and insatiable quest for the perfect groove.

Tauk is another young band in the vein of Dopapod, a progressive jamband, if you will, where it's not quite all about jamming, but more about instrumental prowess and piecing the music together into a real cohesive context where it all makes aural sense.  Local jamband Makayan rounds the bill out, these guys have come a long way in just a few short years and definitely deserve a listen.

Steep Canyon Rangers are rockstars. Even better, they're local(ish), acoustic rock stars.  They won a Grammy in 2013 for Best Bluegrass Record and were nominated for the same award the year before, for their album Rare Bird Alert, which was a collaboration with one Steve Martin, a banjo player more known for his comedic acting.  The International Bluegrass Music Association awarded Martin and Steep Canyon Rangers Entertainer of the Year in 2011.  But joining the Rangers on this occasion is world renowned dobro player Jerry Douglas.  Douglas is widely considered one of the best resonator guitar and lap steel players in the world and his outstanding playing is jaw dropping to watch live.  His incredible resume is a thing of legend, he has recorded with anyone and everyone you could possibly think of, appearing on over 1,600 albums. This collaboration will be one of the best shows you've ever seen.