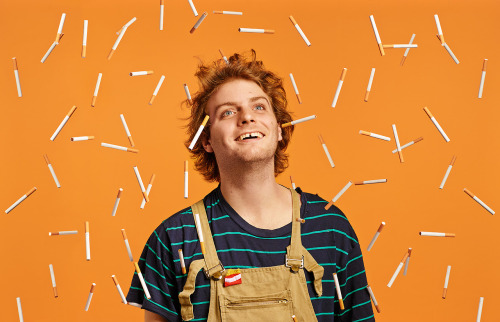 In an entertainment landscape that applauds high level production and image pandering PR, Mac DeMarco stands out for really, just not giving a fuck. Mac has established himself as a down to earth, albeit goofball, slack rocker who draws a massive following.

Why? Why would a chain smoking, pro level joker have such an appeal to a wide range of music fans? With the nature of this question being rhetorical, you should give a listen and answer for yourself.

Yet, I’ll give you some hints…

* Speaking of unpretentiousness; Mac has been known to grab a beer with fans (maybe you saw him at Desoto Lounge last time he was in town) and even gave out his home address at the end of his newest album, inviting friends//fans over for coffee. Some have even taken him up on the offer. “The way I rationalize it,” DeMarco says, “to have the address you’ll have to listen to the album to the very end. Second, to even consider coming to my house you have to be a kind of a superfan. And thirdly, it’s in such a weird part of New York that if they actually get there, they deserve a cup of coffee.” - WSJ

* Mac pulls off the “not even trying” style with ease. Tattered red Vans, dopey overalls, and thrift store hats are a standard uniform for the 25 year old Canadian.

Currently based in the states, he is certainly no slacker as the micro genre he revived would have you to believe. With numerous full length albums, and a handful of mini LP’s he has produced more music in the previous years, than many musicians with such an abundant touring schedule.

Instead of reinventing himself or trying to be ”cutting edge”, Mac DeMarco has focused in on what he is natural at. Making witty, semi-sad songs that could be listened to on repeat. I know, because he was the most listened to artist (by a huge margin) on my Spotify last year. Whoops!

This show is currently SOLD OUT.  Go make some friends who have tickets or if you already do, we will see ya there!