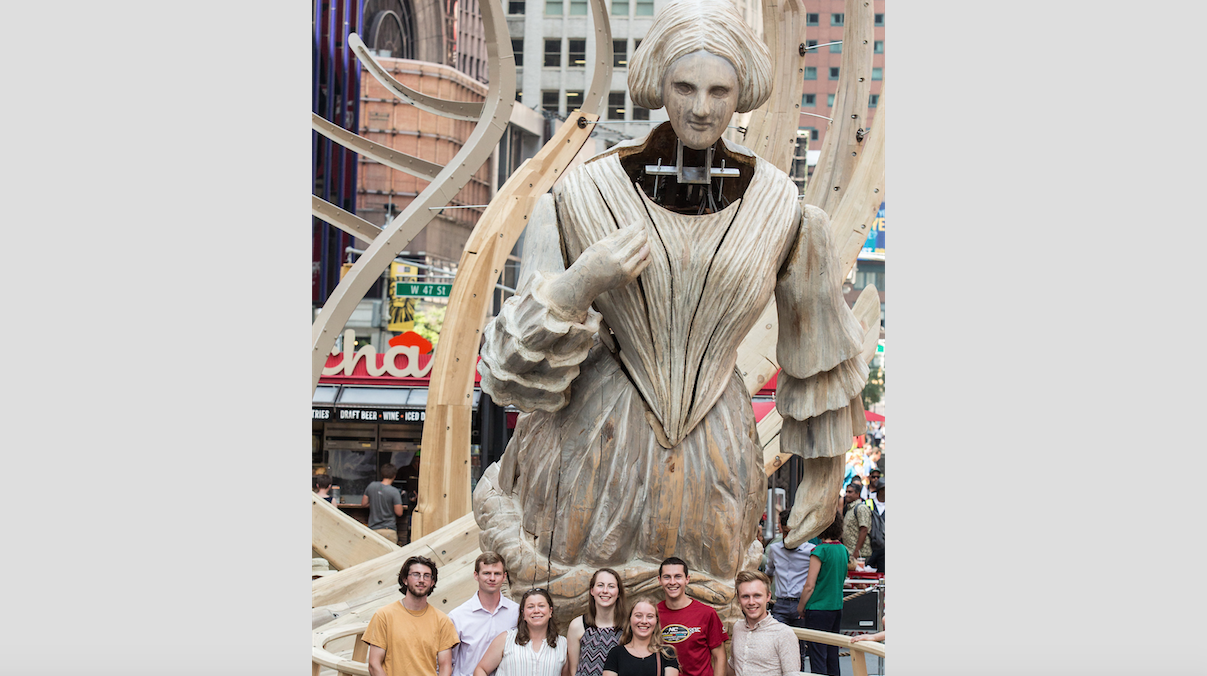 Here's the press release on the recent installation of the sculture, which was fabricated in Asheville:

UNC Asheville students and faculty from mechatronics engineering, art, and other disciplines began working in August with Chin, the conceptual artist was the university’s Black Mountain College Legacy Fellow in fall semester 2017. Work on the project continued into July when the sculpture was trucked in many pieces from Asheville to New York City. The STEAM Studio team worked round the clock in shifts from July 8 until early morning on July 11 to complete installation of Wake.

Wake is paired with Unmoored, a mixed reality work presenting a digital vision of a future Times Square after many years of sea level rise. Chin takes on the 19th century origins of celebrity and marketing, our changing relationship with nature, and the 21st century ability to project an audience deep into the future through technology.

The paired installations engage viewers is connections between hyper-commercialism and environmental threats. “We can’t have a pact with nature without making a pact with humanity,” said Chin at the sculpture’s opening. Docents at the exhibition will wear aprons which say, “The seas are rising. How will you rise?”

Wake is a large-scale (24 feet by 34 feet by 60 feet) installation. "Every day working on this giant sculpture, I've been confronted by my own size and humanity's scale,” said Jeb Hedgecock, the UNC Asheville art student who was Chin’s Black Mountain College Legacy Intern and sculptural lead on the project. “With Mel's installation, Times Square triggers not passive awe but mental engagement — reassessing history and environmental threats. We are individual people, but we are capable of creating change and beauty, and there we are all together."

Wake evokes the hull of a shipwreck crossed with the skeletal remains of a marine mammal. The structure is linked with a carved 21-foot-tall animatronic female sculpture — accurately derived from a figurehead of the opera star, “Swedish Nightingale” Jenny Lind — that was once mounted on the 19th Century clipper ship, the USS Nightingale.

Jenny Lind, the first superstar of the 1800s, entered a New York City emerging as a center of trade, commerce, finance, entertainment, and tourism. Chin begins his Times Square takeover with her as a figurehead of a complex history that includes the shipping (by the USS Nightingale, among others) of guns and slaves that augmented New York City’s economy.

Unmoored explores a potential future of melting ice caps and rising oceans filling Times Square. Developed in collaboration with Microsoft, Unmoored allows guests to use Microsoft HoloLens to explore a submerged Times Square in mixed reality, or their mobile phones to access an augmented reality experience.

Wake and Unmoored are part of a survey of Mel Chin’s decades of works presented this spring and summer in many New York City locations by Times Square Arts, No Longer Empty and the Queens Museum.

For more information about Wake and Unmoored in Times Square, visit http://arts.timessquarenyc.org/times-square-arts/projects/current-upcoming-projects/index.aspx.