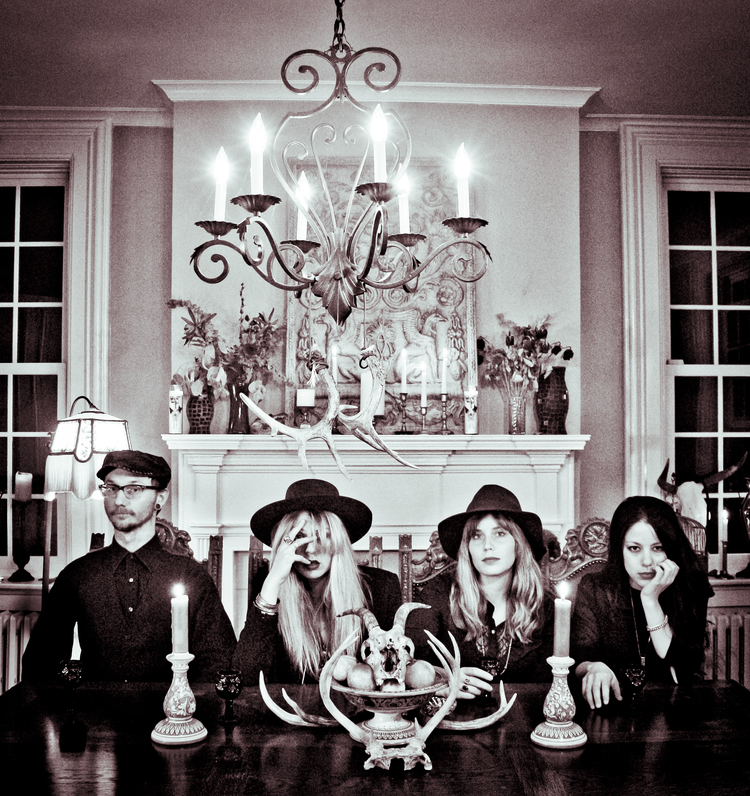 Ancient Warefare will be at The Mothlight August 5.

Kentucky bred band, Ancient Warefare, is making their Asheville debut this week, in promotion of their new LP, The Pale Horse. Having traveled to Asheville for pleasure, they fell in love with the city's serenity and decided it was time to bring their music here. In anticipation of their show coming up on Wednesday, I was able to ask them a few questions to get to know them and their music a little better. Enjoy. And be sure to check out their hauntingly dreamy album teaser video below.

Lauryn: For readers completely new to your music, can you describe your style and tell us a little about the band?

Ancient Warefare: Ancient Warfare's style is fuzzy melodies, drone, a bit of psychedelia, rock/ southern gothic. The mindset of our band is very song/story-based with attention to the lyrical narrative. Echo’s guitar provides a spine to the band that produces thick heavy vibrations in tone. Derek Rhineheimer is on bass guitar (even though he identifies as a guitar player). He is an exceptionally good bassist and provides a lot of movement and textural ingredients to our sound. Rachael Yanarella is on the violin/backing vocals and creates lush sonic soundscapes. We consider her to be the "glue" in the band. Emily Hagihara majored in music performance for percussion at the University of Kentucky. She is on drums, keys and backing vocals. We could take her or leave her.

Lauryn: You all are so unique and bring something different to the table. How did you decide what your sound would be?

Ancient Warefare: The music ends up being a reaction to the lyrical content and any seeds or ideas brought forth by Echo, who writes the songs. So with a lot of the themes of our first record being based around this idea of apocalypse/life/death, we try to create a kind of atmosphere which these stories can live in. We have gradually come to develop our sound, and that has come from a lot of time playing together and a lot of work. We play to everyone's strengths – we are all very different, but our ideas are very relatable. There is a sort of dialogue there. I think we all see the big picture behind a particular song in a similar way and we effectively communicate our ideas in order to get there.

Lauryn: Your album, The Pale Horse, will be releasing August 11. Congratulations. Can you tell our readers what the creative process was like in making this album?

Ancient Warefare: Thanks! This is our first album, even though it seems like we should have had at least 3 out by now, and we’re really happy that it’s finally here. When the recording process started, Ancient Warfare was not fully realized as a band yet. Arrangements became a collaborative effort with session musicians and producer, Duane Lundy, at Shangri-la. These folks were also good friends whose judgements were trusted and appreciated. So a lot of it in the beginning was just figuring out how to bring these songs to life. Once Emily and Rachel joined the band, we continued on with some newer songs we had worked up that felt like they belonged with the other previously recorded material. We decided to move forward with the idea that we would now be putting out a full-length album, not an EP. We recorded these new songs with rotating bass players and kept the rest of the tracking mostly to the trio. We were gradually finding our sound as a band – what kind of music we wanted to make and how to make that come across on record as well as in a live setting.

Lauryn: You are playing shows in major cities, such as, Brooklyn, NY and Chicago, IL. What made you want to bring your music to Asheville, and put on a live show?

Ancient Warefare: We start our southern leg of the tour in Asheville. From there we will go to Atlanta, Savannah, Athens. I have visited Asheville a number of times but have never actually played here. It feels very calm and serene – perhaps because I have always come here exclusively for pleasure. We are looking forward to playing here and revisiting some old haunts!

Lauryn: What can people expect from your live show?

Ancient Warefare: On stage we are more raw and energetic while keeping with the wistful feel and emotive pull of the album. We’ll be playing a lot of songs off the record as well as some newer ones which are a bit more driving and heavy and of course we will play our asses off for you.