This Past Week of Goodness...

This Past Week of Goodness... 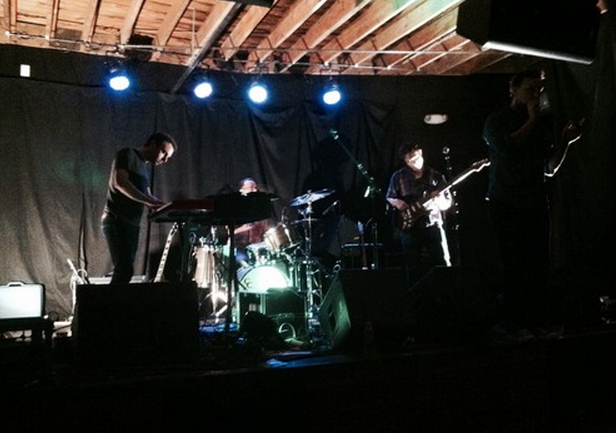 Hey gang! I have been fortunate to recently score some high quality tunes just a short walk away. Lets catch you up.
First off, this is an opinion piece. Just me and my perspectives pitter pattering away on the laptop keyboard. If you don’t like my opinion, then fuck you. I am just kidding, that would be rude.  What I mean by this is: it's for fun. Music is fun, people are fun, throw in a few beverages and that adds to the fun. If you have something to offer, please do. We value feedback and comments.
Now let's get to to it. After living in and around Asheville for almost 10 years, I find myself living back on the West side. Not like Emma or the other side of Patton; but smack dab in the middle of all that West Asheville shit. A quick walk and my food, beverage, haircut, movie, coffee, music, booze, taco needs are met. Regardless of its drawbacks and challenges with quick growth, it rules. Sometimes I don’t leave the 28806 area code for over a week. What's that you say? Maybe I should get out more? I am getting there; chill out!
Thursday -  Normal food and beverage tour via bicycle finds me at The Mothlight. Big surprise! Caught the tail end of Rough Coat, which is a couple of those good looking kids from River Whyless.  If you don’t know about these talented young lads (& Lass) then do yourself a favor and get caught up.
After that goodness, VA/MD comes on. VA/MD is a side project of another Emily Easterly. Emily Easterly is an Asheville, by way of Brooklyn artist that brings boatloads of talent and fun to the stage. She is described as “what a redhead should sound like”. That sums it up very well. Glad to have caught her before she heads out of town for a bit. I am not sure she knows I am in love with her, but public announcement seems fine.
Friday - A rainy day at work had me flipping through the Facebook. I had planned to go backpacking this weekend, but backpacking in the rain sucks. Time to reevaluate…A bleepity bloop (makes sound outloud) on the social network. Hmm? What? A super, secret house show with Eric Slick.  Eric Slick doesn’t ring a bell? He plays drums in a band called Dr. Dog. You know the Philly band that has a massive following and plays with Mac Demarco, My Morning Jacket, and Band of Horses. Bonnaroo; yeah they play tunes there and stuff. Shadow People? Heart it Races? Yeah those songs are catchy as hell. Get out from underneath the rock man!
So back to the house show. A brief Facebook message exchange with Eric Slick and the address is mine.  And its super close to my house. Ooh I feel special!!!!  I roll in fashionably late, not knowing anyone. But that’s cool because the whole crowd (20 +/- people) is enthralled. Eric is seated on the floor of a basement garage with an out of tune, beater acoustic guitar. He serenades us with beautiful, haunting songs. Tons of originals and some fun covers. Really cool to catch him in this setting. Check out his duo Lithuania. 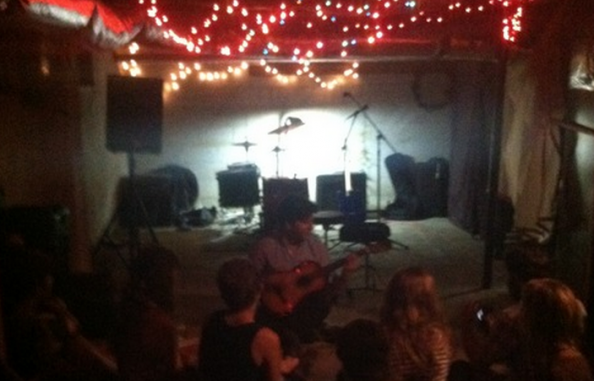 Well that was fun! How about some more...So much fun!
I cruise over to The Mothlight to catch the last song of Minorcan. These fellas got some sweet lo-fi folk sounds. Capo free since 1993. I dig it. Then local, party sound makers Bulgogi take it over. They worked the crowd, rocked it out and had some fun.  Bulgogi is a dance-able rock band that never takes itself too seriously. Gosh this is getting fun!
Now that the locals got us all warmed up, Deleted Scenes takes us on a sonic journey for the win. Deleted Scenes is an art rock band from Washington DC.  Actually I don’t know if you can even call them that. They have a sound that I could not pin down. The music combines elements of rock, punk, pop, psych, noise, math rock, and Americana. The lead singers confessional, poetic lyrics pull you in and push you around in a beautiful way. Deleted Scenes may be my new favorite. And for those few wise souls who hung around or stopped in for their Asheville show, you might feel the same. 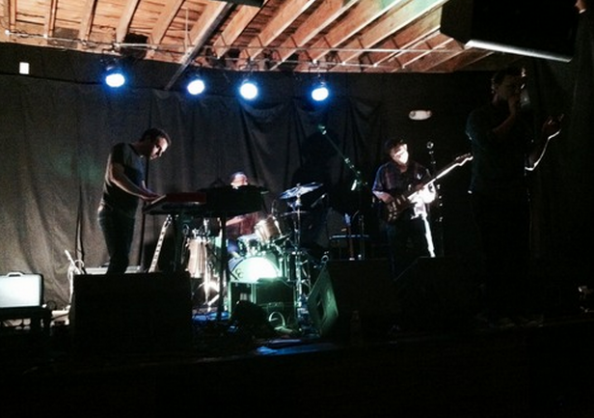 Saturday- Another day of rain. The weather has been so nice this summer, I forget what to do with myself when I am not seeking some outside fun time. I text Jon from The Mothlight. "Last night was rad. Deleted Scenes rules. Is Lucius Sold out?”  A quick reply from Jon and my dreams of the weekend music hat trick is crushed. "Sold out last week. I would try to wiggle you in but….  Sorry dude, I have been getting pounded with emails and texts about this show. We are over capacity.”  So there I have it. Plan B- Trampled by Trurtles? No, I don’t even really like that kind of music much (sorry guys); and its an outside show in Black Mountain. Nope. Plan C? Black Lips at The Orange Peel? This is becoming a viable option…I think I will leave the comfort of the Westside for a night in the big city. Procrastination sets in and I find myself stalling for whatever unknown reasons. Maybe it was the milk shake from The Hop, or the IPA that goes down smooth with Foosball championships. I am not moving in the downtown direction. I get a text from Jon. “Got a few tickets at the door.” I tell him I will be there in 10 minutes. Actually it was less than that for me to finish my beer, go to the ATM, be in the door with a stamp on the wrist and a Bo n’ Crow in my hand. (If you dont know the Bo n’ Crow, you should fo sho)
Lucius. Whoa!  My brief research of this band turned up some good things. They were lauded by the New York Times for their "luscious, luminous, lilting lullabies” praised by NPR for their “chairsma and charm.” Rolling Stone called them “the best band you may not have heard of yet.” 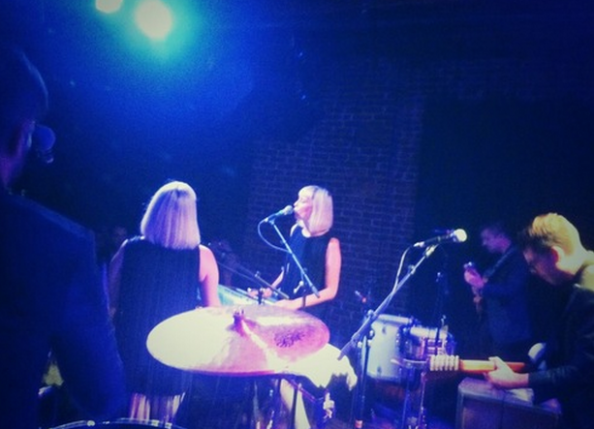 The Mothlight was packed. Let’s just say that the ladies love them; and umm by that I mean there were a lot of ladies who love ladies. If you know what I am saying. The two to one female to male ratio didn’t really matter, because it's aSHEville right?
The 5 piece indie pop band is fronted by two goddesses (Jess Wolfe and Holly Laessig) who met while attending the Berklee School of Music in Boston. These gals know how to make it happen. Witty banter between songs and lots of crowd interaction. I found it refreshing that the crowd knew most of the songs word for word. Everybody was singing along. You don’t get that much at The Mothlight.
Lucius worked through an 1.25 hour long set, with fervor. They had me dancing and grooving with their sexy harmonies and palatable pop. During many of the songs four of the band members were playing some sort of percussion.  It was so cool to see so much talent. Just when you thought it was over and people started heading out, they moved a single microphone to the middle of the dance floor. Management shuffled them to the center for a two song encore that ended with a beautiful, acoustic version of “Go Home”.

To top it off with cool factor: when they were done playing the band immediately headed to the merch table. Jess and Holly greeted every single fan for autographs, photos, and genuine exchanges. The line was long and didn’t dissipate for another hour and a half. The level of professionalism mixed with down to earth gratitude made me smile. Certainly not a common thing among nationally known touring acts.
In closing, it was a fantastic weekend of musical goodness in my favorite, little neighborhood venue.  If you shared these experiences with me, you know what I am talking about. Leave a comment about your experience. If you didn’t, then follow us on Facebook, Twitter and Instagram for updates. Click through the band links in this article. Give them a listen, buy an album, buy two albums. One for you and one for your cousin who only listens to shit music.
Thanks for reading and we will see you out and about.
Seth