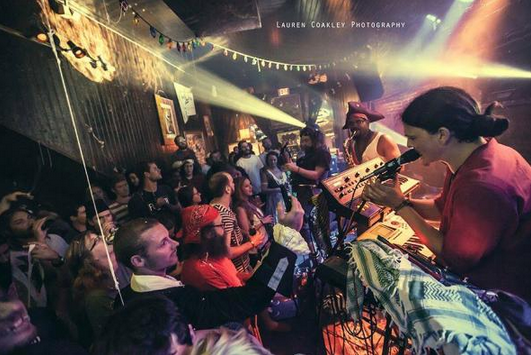 Being different isn’t necessarily a bad thing; sometimes, it gets you noticed more than being exceptionally normal.

Phrases used by musical critics and commentators to describe Opposite Box, hailing from Chattanooga, T.N., include “weird rock” and “belligerent funk.”

Make a Jungle Noise Here is Opposite Box’s latest project, but Asheville residents can look forward to a more timely renewal of the band’s seamless combination of rock, funk, jazz and pop music when it comes to Asheville Music Hall on Thursday March 5,  with the Main Squeeze.

“I’ve never heard them play live before,” says Katherine “KP” Powell, talent buyer at Asheville Music Hall. “This will be the first time I know of that Opposite Box will play with us, but I’m sure it’ll be great"

Opposite Box visited the Emerald Lounge (RIP) and a few other popular Asheville sites since beginning its touring career in 2012, bringing with them a love of all blended musical styles. Since its inception, the band has drawn inspiration from a myriad of artists including Frank Zappa, a personal influencer for Long.

“We just wanna take all of our favorites and blend it all,” Long says with a laugh.

Each time Opposite Box has come to Asheville, he says it’s always different and never anything but a great time because of the enthusiasm of the concertgoers.

To Long, it seems as though everyone in the area is constantly seeking out the chance to go to a live show, and Asheville is the most pumped up city around when it comes to music.

“The whole city just feels like a music festival all the time,” he says. “We saw some older grandmas when we were walking in the audience one night and asked them if they had grandkids in one of the bands or something. But no, they said they had heard about a band playing and just wanted to come out and see it play!”

In the band’s travels, especially in its earlier days “jumping through hoops” at events for recognition, Long says they were often told the band wouldn’t be marketable if it couldn’t settle on a certain sound and style.

“A few years later, though, here we are,” Long says. “We’ve got a huge, varied audience that’s listening to our music and it’s working for us.”