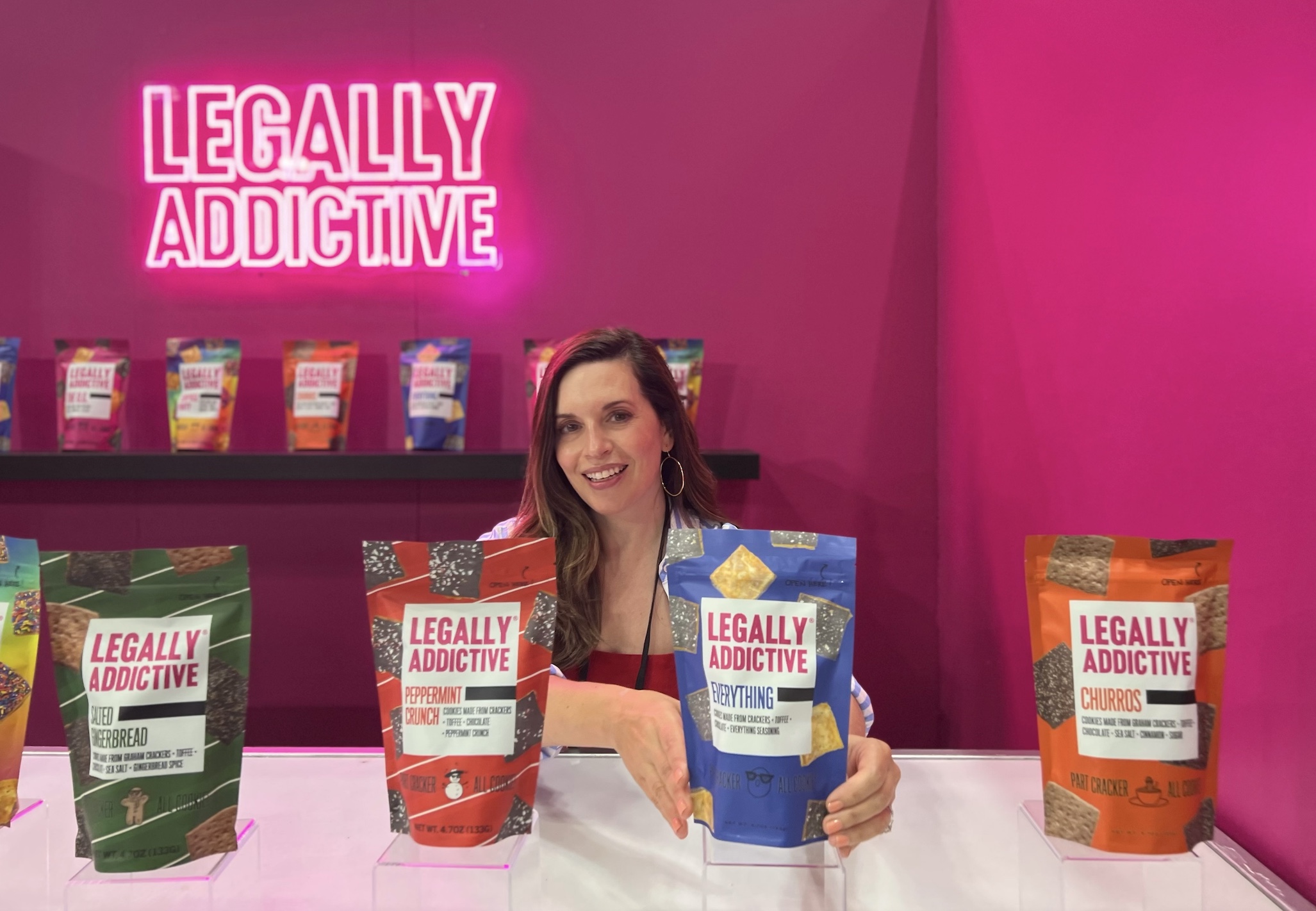 Legally Addictive cookies are made from a cracker, handmade toffee and sustainably sourced chocolate, topped with sea salt for an amazing sweet, salty and crunchy flavor combination. Inspired by a homemade recipe that is popular in the MidWest and the South. It was something the Founder, Laura Shafferman made at home. When she discovered that it wasn’t being made commercially anywhere, she was determined to make it into a shelf-stable product.  Laura came up with the name as she found a real need for levity and tongue-in-cheek fun in the food industry. Since they are not traditional dough cookies [they are made from a cracker] they call them “Part Cracker, All Cookie”. Available in four flavors: The OG (Sea salt), Everything (Their NYC cookie made in honor of the Everything bagel which has origins in NYC and is a local favorite) Surprise Party (rainbow sprinkles and sea salt) and Churros, (inspired by their favorite Spanish treat) with two Seasonal Flavors: Peppermint Crunch and Salted Gingerbread [SG collab with Spicewalla] launching in November, which will be available through the holiday season. When ordered from their site, their cookies arrive in their beautiful signature pink gift boxes. Laura also works on various collaborations with other brands like-minded woman-owned businesses. Their product is sold online and in over 1,500 retailers and hotels in the US, Bermuda and Canada. 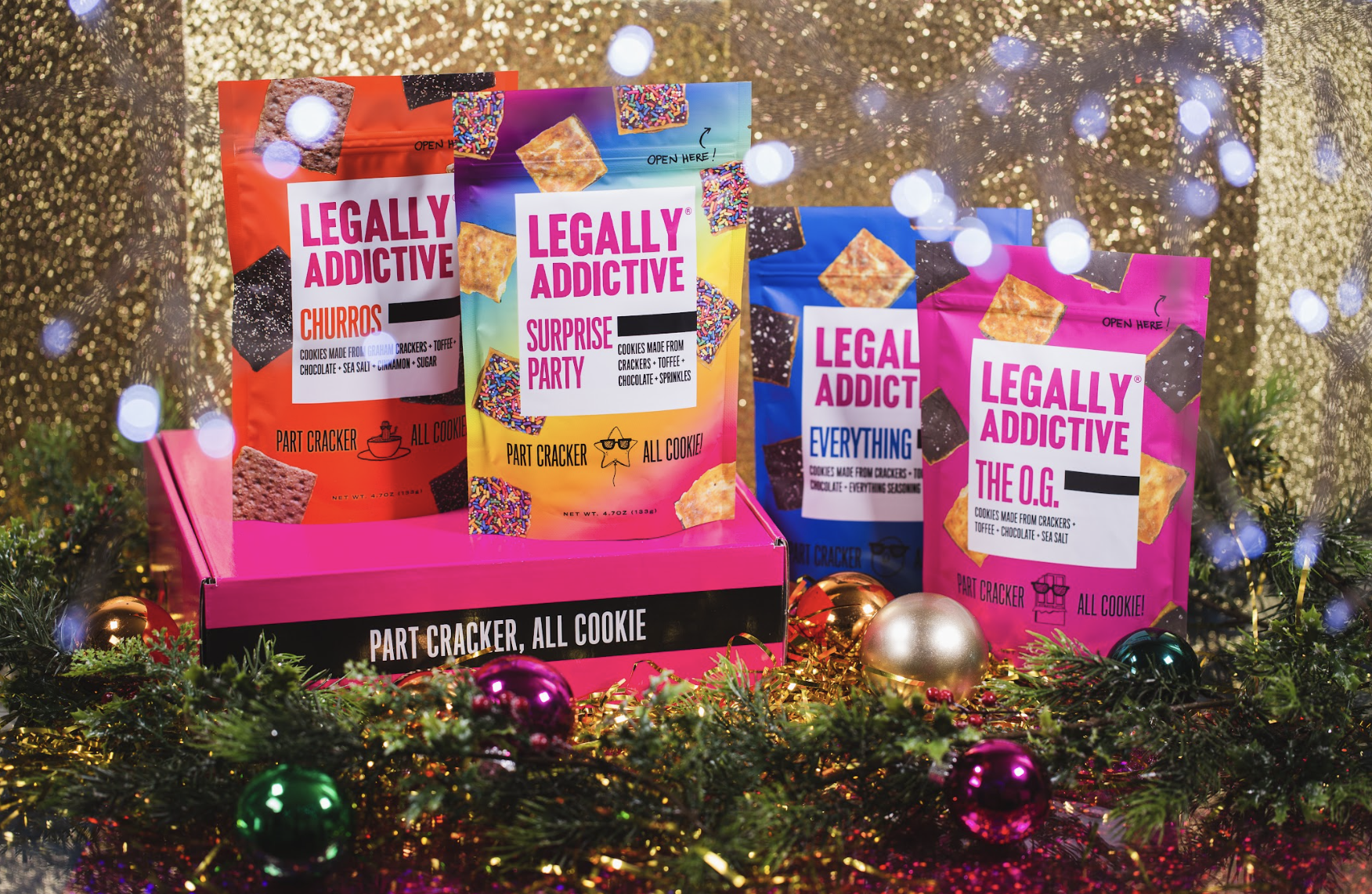 Brand Story:
After spending over a decade in NYC real estate marketing, Legally Addictive founder Laura Shafferman  was suddenly laid off and bound by a non-compete clause that prohibited her from working with other firms.
Laura had lost her usual means to earn a living for a full year and was determined to take control over her future and not wait for that non-compete clause to expire. As a creative trapped in a long series of jobs that required constant spread-sheet making, this was somewhat of a relief and also the catalyst needed to make actual change. Fatefully, after making a batch of her favorite childhood cookies for a party, a friend suggested she sell her homemade toffee and chocolate covered crackers at a holiday market. After selling out in only a few hours, she knew they were a hit and a new business was born!
She spent the next year learning the food business and recreating the recipe for shelf-stability and during the day, worked various odd jobs to support herself. Eight months later, a few stores in New York City agreed to carry Legally Addictive, including the flagship location of Dylan’s Candy Bar. At the time, Laura was making cookies in the off-hours of a bakery in Brooklyn, often until well past midnight, and then delivering them around town on the subway and bike.
Why the move this year to North Carolina?
Laura realized years ago that they couldn’t grow beyond being super small in a city where real estate is so wildly expensive. Making a physical product takes space. You need room to produce, space to ship, you need storage to buy raw materials in bulk and store a million boxes. And then you need more storage. They moved 4 times and built two custom kitchens in the past 6 years and in the past year, they knew they reached their limit.
They would never be Legally Addictive Foods without New York. It’s in every single thing they do. The locals love their hometown brands and they love their entrepreneurs. They also had unparalleled exposure and tons of luck there being in the right place at the right time, many times. They even have a cookie that’s an homage to the everything bagel, every New Yorkers’ favorite.
They are thrilled to join the food and business community in Asheville and have received the warmest of welcomes, meeting other incredible female business owners who have been a source of support and encouragement.
- - - ADVERTISEMENT - - -