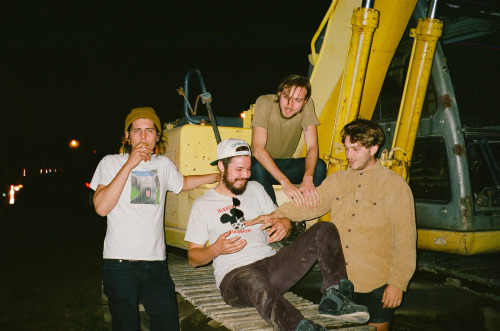 We caught up with the band on the road to headline Baby's All Right in Brooklyn.

Chicago four-piece Ne-Hi’s songs bubble with energy not unlike those of the Paisley Underground or R.E.M., but mixed with the jangle-punk of the early Flying Nun scene. The band pulls effortlessly from their influences, but makes them their own. Born out of the backyards and basements of Chicago’s DIY music scene, it could be said that Ne-Hi began as a lark; four friends coming together to score another friend’s film. When the foursome – comprised of guitarist/lead singers Alex Otake and Jason Balla, bassist James Weir, and drummer Mikey Wells – took stock of what they were capable of, the decision was clear that they needed to keep making music together. And so their nascent story continues, with local Chicago press fawning and shows selling out, making it time for a bigger audience to see what the boys of Ne-Hi are brewing. This is the first of many times you’ll be hearing the name Ne-Hi, so realign those receptors.

Note: Often as a music fan and writer, I get tired of the same, tired interview questions.  I know bands get tired of telling the same tired answers.

We switched it up a bit with Ne-Hi and had some fun:

[Laughs]  All right that’s a good question.  I would say hello and welcome them to Earth.  We could be considered post-punk, with guitar work.  It is rhythmic and has a lot of pop music harmonies  Definitely some 60’s as well as 80’s vibes. I mean if this alien is familiar with pop music, he would know kind of as an 80’s indie stuff.

Cool. Perfect. I think the alien is going to like your sound. I do.

When you are hitting the road hard and on tour- What is the small luxury or thing you must have when you are on tour to keep sane?

We sometimes on riders have what we call the “poor mans Gatorade”, you know Powerade? We do that a lot because you're at bars at night and then driving all day. Need to stay hydrated, you know? We read a lot of comic books too. You're bouncing around in a van a bunch so it’s good to have something to read. It’s hard to get into a novel.

We nap in the van too, so it’s nice to lounge and read comic books. And of course drink “poor man’s gatorade”.

NE-HI - Since I've Been Thinking from Joe Mellor on Vimeo.

You guys are wholesome. Let’s be sure to stock them up Asheville!

Oh that’s a tough one.  How about Taco Pizza?

These guys nailed it!

What is one of the weirdest//strangest thing that has happened at a show or on tour?

Let’s keep it semi- appropriate. Think of the children who read this blog.

In order to keep it appropriate, I would have to say we got chased by the cops once.

We were in Baltimore driving around after a show, and we were following our friends car who we were staying with. We didn’t really think it was his car though, because it looked like a Bat-mobile [laughs]. We were laughing and goofing around on this highway, and then Baltimore police started following us. They followedf for us for a long time, and we were sort of weirding out on why they were following us for so long. It’s funny too because for some reason all the parking spots in Baltimore are for compact cars, and we had to squeeze our van in there. It was a strange night for sure.

OK, so if you wanted to give someone a big hug, someone the readers would know, who would you hug it out with?

On the flip side of that.  If you could punch somebody in the face: who would it be? I am not condoning violence; but some people should punched in the face.

Zach Braff. Yeah, that guy has a face you just want to punch.

With a solid Chicago - Mothlight connection these guys are coming to flip your lid. Be there.
Tuesday, August 18 / Doors at 8pm / Show at 9pm / $8
Local Asheville jammers Shallows and Isaacson open.