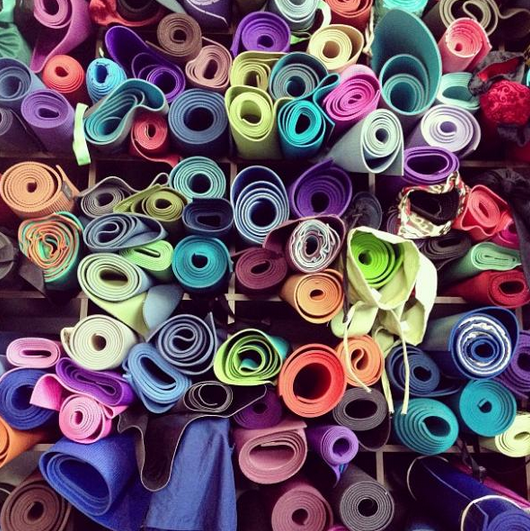 I consider myself to be a good Ashevillian. I drink craft beer, think Monsanto is full of shit and volunteered at Bele Chere. I practically deserve the key to the city.

However, there is one particular Asheville activity I could never get into. Yoga. I thought it was an excuse to buy expensive stretchy pants and say you worked out. When in reality, all you did was touch your toes for an hour and avoid real exercise. It just never appealed to me, and after three sessions this summer, I was running for my car when we concluded class by beating our chests and chanting. Yes, chanting.

But, I must admit I have always been semi-athletic and with a brief stint as a college runner, my ideal workouts have always consisted of heavy weights and interval training; while a grey haired man is yelling, “Drop the hammer!” into my left ear. I associate working out with actual work. Needless to say, this new sitting on your butt and finding your inner peace thing was not for me.

So, flash-forward a few months, and a friend of mine from back home who has entered a new phase in life where all she eats is avocado toast while listening to Serial podcasts, sent me a link to an article on the benefits of Bikram hot yoga. I had nothing better to do on a Tuesday night, so I read it. I was shocked! The health benefits were pretty staggering. It was a detox, workout, and rejuvenating exercise, all in one.  What more could you want?

I needed a detox from the holidays and Girl Scout cookie binges. I wanted to add something to my workout regimen that I knew would not injure my fourteen year old Justin Bieber frame. And my high strung personality needed a chance to relax for a bit. I decided to give it a try.

Asheville Hot Yoga was (still is) offering a ten day, $25 pass for all new guests. Basically, ten days to get a feel for the class and the style of yoga and decide if you wanted to join. So I did.

Upon arriving I had no expectations. I showed up early and took my $10 non-organic, synthetic Target yoga mat into the studio. I was immediately surprised at how enjoyable the heat was in the room. It was not humid or dry, just the right combination. It was six degrees outside and 110 inside, so that may have played a huge role. But, I took my yoga mat, towel and water bottle and picked a spot in the back of the room, where no one could judge me. The class quickly began to fill up with equal part men and women and as I sat upright with my legs crossed, trying to look like I knew what I was doing, the instructor walked in.

Immediately everyone stood up, and I quickly followed, knocking over my water bottle and watching it roll a few yoga mats over. I retrieved the bottle and made a walk of shame back to my mat. This was starting out great. The instructor, with a jaw line that could cut a bitch, stood on the small platform and looked directly at me. She informed the rest of the class that this was my first time and that I should just take it at my own pace and not worry if I don’t catch on quick. Challenge accepted.

The class began and as I looked around I was shocked. Everyone was half dressed. Tiny shorts and even tinnier sport bras. Grown men and women with stretch marks and beer guts, completely baring their bodies with no shame. It was incredible and empowering. I was already liking this.

We took deep breaths for three to four minutes to prepare our bodies for the hour and a half class. I could feel my body starting to warm and the sweat on my shoulder blades began to drip onto my mat. We then moved into our first pose. Arms stretched over our heads with interlocked thumbs as we moved our bodies left to right. I was so mesmerized by the people in the class, with their not-so-yoga-like bodies that I completely missed what was standing right in front of me. I’ve never seen one before. A thigh gap. In the flesh.

There it was. Directly in front of me. A petite girl who looked like she had been doing yoga and only consuming raw vegetables her whole life with hair as beautiful as Cinderella, who I’m sure smelled like pine needles, gently moving her toned body side to side. I was a little star struck. I kept staring at the back of her thighs, hoping that they would move together and touch, but they never did. Then I realized I was checking out another girl’s backside…in Asheville. I didn’t want the single men in the room to think I was playing for the same team, so I quickly focused my attention back to my horrible posture and sweaty back.

The class continued, and as we moved into various poses my entire body slowly became covered in sweat. My shins, my hands, body parts that I didn’t even know had pores, began to slowly ooze with the salty perspiration. By the time we reached our ten second water break, I was hooked. This felt amazing. The instructor was incredible. Completely inspiring and equally motivating.

The class was broken into three different types of stretches. All of which I do not remember and refuse to try to spell. However, each pose became increasingly more difficult as the class continued and my body began to pour sweat. Trying to grab my right foot with my left hand only caused my hand to slip and for me to lose balance. But I enjoyed every minute of it.  The people around me slipped, wobbled, and moved out of positions that were too challenging for them. Some even laid down and allowed their bodies to rest for a moment before beginning again. I felt completely relaxed and not all embarrassed.

The class ended with another breathing exercise, and as I looked around once more, I noticed everyone was just as sweaty and strenuously happy looking as I was. We did this together and we had this unspoken comradery that no one could take away from us. We all laid on our backs, closed our eyes and as the lights were dimmed and the instructor exited the room, I felt so energized. The class was over and I had managed to not make a fool of myself while experiencing something just months ago, I would have refused to try.

I exited the 110 degree room and walked directly into the bathroom. The cold air that hit me was so strong, part of me wanted to run back into the studio and regain some heat to my body. I changed out of my completely wet clothes and into something clean and warm. I grabbed my bags and my wet yoga mat and headed home, completely ready for the next class.