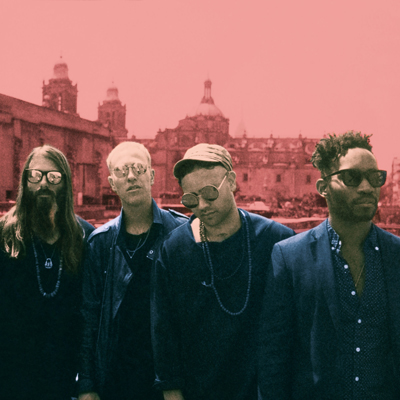 If you are not familiar with this ever evolving trio, lets get on the time machine and go back to 2010, when frontman Ruban Nielson released "Ffunny Ffrends" on his Bandcamp.

‘Ffunny Ffrends’ was everything you imagined it might be – alien beatnik pop music that echoed 60s psychedelia and krautrock minimalism with just a hint of gentle weirdness that suggested its roots might equally lie in the verdant indie of the equally distant New Zealand scene.

It flew under the radar for a minute, due to some anomyninty. Shortly there after, music bloggers started paying attention.  The next year Unknown Mortal Orchestra released their self titled album on Fat Possum Records.

Fast forward a year to when they dropped II. The album received critical acclaim for a shimmering beat heavy, psych sound that hadn’t quite taken hold in mainstream music at the moment. Unknown Mortal Orchestra toured NZ, OZ, and Europe before hitting North America with Foxygen opening on the US part of the tour.  During this time Unknown Mortal Orchestra was named one of “30 must see artists” at South X Southwest.

Hop back in the time machine to May of last year, and we find ourselves at the release for Multi-Love. The threads of our past never unravel, they hover like invisible webs, occasionally glistening due to a sly angle of the sun. On Multi-Love, Unknown Mortal Orchestra frontman and multi-instrumentalist Ruban Nielson reflects on relationships: airy, humid longing, loss, the geometry of desire that occurs when three people align. Where Nielson addressed the pain of being alone on II, Multi-Love takes on the complications of being together.

Multi-Love adds dimensions to the band’s already kaleidoscopic approach, with Nielson exploring a newfound appreciation for synthesizers. The new songs channel the spirit of psych innovators without ignoring the last 40 years of music, forming a flowing, cohesive whole that reflects restless creativity. Cosmic escapes and disco rhythms speak to developing new vocabulary, while Nielson’s vocals reach powerful new heights. “It felt good to be rebelling against the typical view of what an artists is today, a curator,” he says. “It’s more about being someone who makes things happen in concrete ways. Building old synthesizers and bringing them back to life, creating sounds that aren’t quite like anyone else’s. I think that’s much more subversive.”

While legions of artists show fidelity to the roots of psychedelia, Unknown Mortal Orchestra shares the rare quality that makes the genre’s touchstones so vital: constant exploration.

Be the coolest Valentine and take your (non-gender specific) bae to this show!