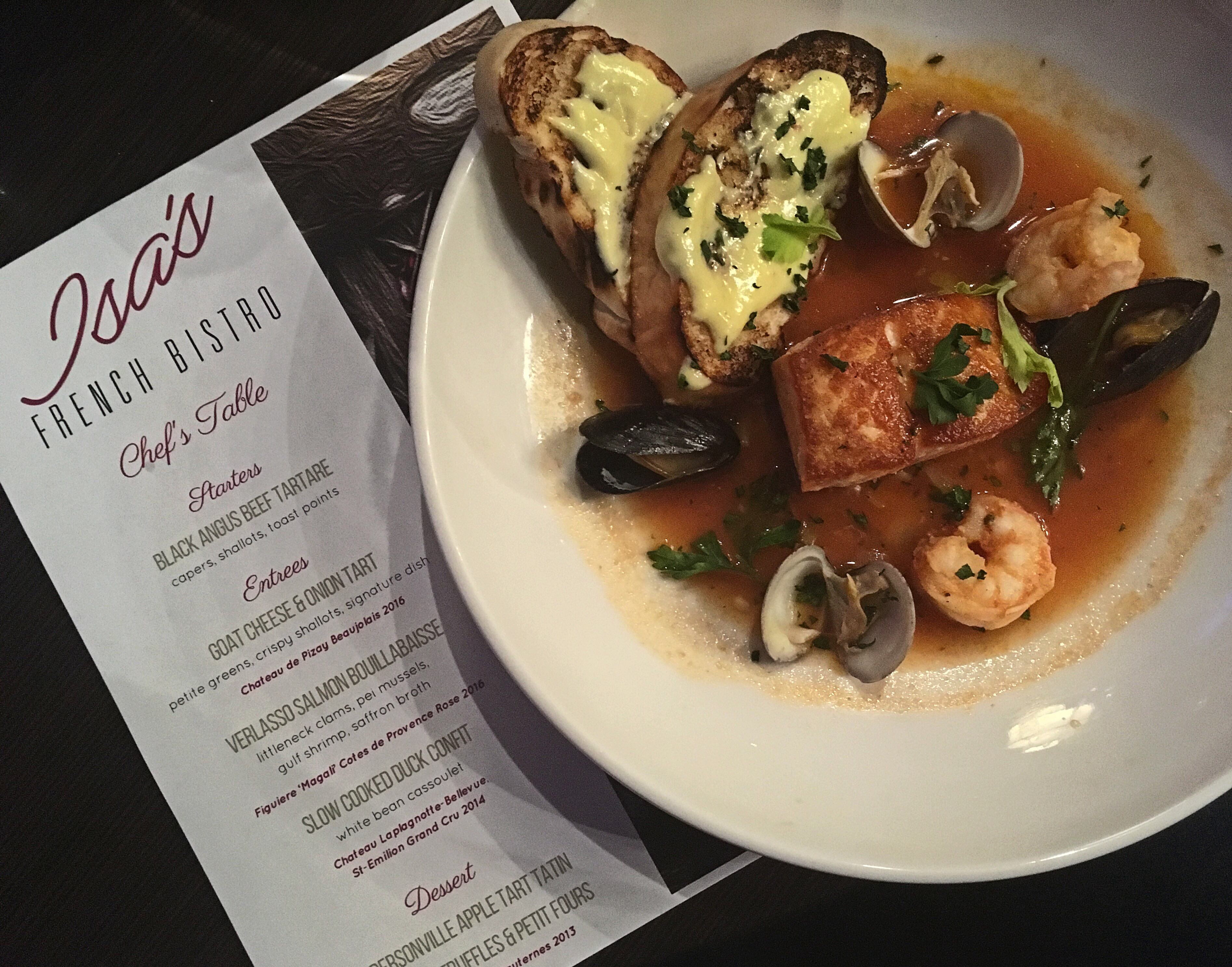 A couple of the Grit folk were recently invited via Instagram to an evening of French cuisine bliss as an unveiling of the new menu for Isa’s French Bistro (pronounced Ee-sa’s). We walked into the hotel lobby, were greeted with smiles, directed to the elevator, and brought to the basement (beginning of all internet bad decisions). The elevator doors opened and staff members were holding trays of champagne. I grabbed my flute and walked into a softly lit room filled with like-minded, food-centric folks.

The start of the evening was the aforementioned champagne, a platter of beef tartare toast points, and cheeses. Beef tartare, made with raw ground meat, is one of those quintessential French dishes. Some might find it strange; I freaking love it. While I’m much more familiar with Thai (larb) and Ethiopian styles (kitfo), i.e. crazy spicy beef tartar, Isa’s did a lovely, classic, delicate French version. Soft herbs, smooth texture, crusty toast points, topped with tiny chives. So nice I almost wept. The cheese plate was a well-rounded selection with a flavor profile for all the cheese lovers. I didn’t take good notes at the beginning (well, at all), but essentially there was a robust young cheese with a soft rind, a possibly Trappist-style cheese, and a bleu cheese that was surprisingly less bold than the young cheese. They all paired well with the bubbly and most impressively each other. I might have used the Trappist style and dipped it in the soft brie-ish cheese. Don’t judge me...

Owners Isa, Alex, and Anthony (Tony) Fraga talked about their journeys to restaurant ownership and the inspiration behind Isa’s. The Fragas had long dreamt of opening a traditional French restaurant, but had been warned away by people in Asheville who thought that fusion was where the city's tastes lay. Now, they have unveiled a new menu in the spirit of their earliest goals for the restaurant. "We were told Asheville wasn't ready for this," said Alex, "but I've never seen Asheville not be ready for anything."

The Fragas aren't stopping at France, though. Their other current restaurant project is Hemingway’s Cuba (I freaking can’t wait), which will recreate some of their favorite dishes from the island, where the family is from (more on that soon!).

After the talks we went upstairs to the main dining room, where we were introduced to Chef Duane Fernandes, House Manager Tony Creed, and the rest of the team. There, the softest, fluffiest, creamy-dreamiest caramelized onion tart awaited us at the table. The sommelier, Julian Ramirez, presented the Chateau de Pizay Beaujolais (2016) that he had selected to pair with the onion tart. It was a beautiful, easy to drink wine, again impressively well matched to the food.

Second course: seafood bouillabaisse, another French classic. It’s a mix of seafood nestled in a thin saffron broth. This one had a chunk of pan-seared salmon, as well as plump shrimp, clams, and mussels, served with a side of crusty bread topped with aioli. The flavors were simple and clean, like many French dishes. Ramirez selected the delightful Figuiere "Magali" Cotes de Provence Rose (2016) to pair with the bouillabaisse. It was light with plenty of personality to be drunk on its own, but alongside the bouillabaisse they both shined even brighter.

Duck confit finished off the savory courses for the evening. Like everything else, Isa’s does gorgeous duck confit. The skin was crisp but, once pierced, the meat pulled off the bone like butter melting from a hot knife. It was tender to the point of oblivion, and sat atop bed of white beans that were little flavor bombs. The sommelier paired this with the Chateau Laplagnotte-Bellevue St-Emilion Grand Cru (2014). Of course they went well together. Ramirez knows his stuff. Every dish was well paired with a wine that didn’t just taste good, it enhanced the whole dish.

Dessert was served where the evening began, but this time we took the stairs. At the bottom of the staircase we were greeted by staff holding trays of what was the last drink for the evening; La Fleur d’Or Sauternes (2013). It was magic on the tongue that briefly made me forget almost everything I had eaten and drunk that night. There was a table brimming deserts made by pastry chef Stephany Hicks: apple tarte tartin, chocolate truffles, macarons and petit fours. I might have tried one of each. Because #yolo.

Isa’s is a restaurant to go and spoil yourself. The chefs, the sommelier, the wait staff, and the management are knowledgeable, courteous, and all around amazing professionals.

Summary: Isa's has a new and improved French inspired menu with many classics to select from. I highly recommend that you check it out. It's a great date night spot, and a fabulous place to daydream about European vacations.

All of the wonderful folks at Isa's French Bistro. It was an evening we won't forget.

Gap Creek Gourmet for the invite