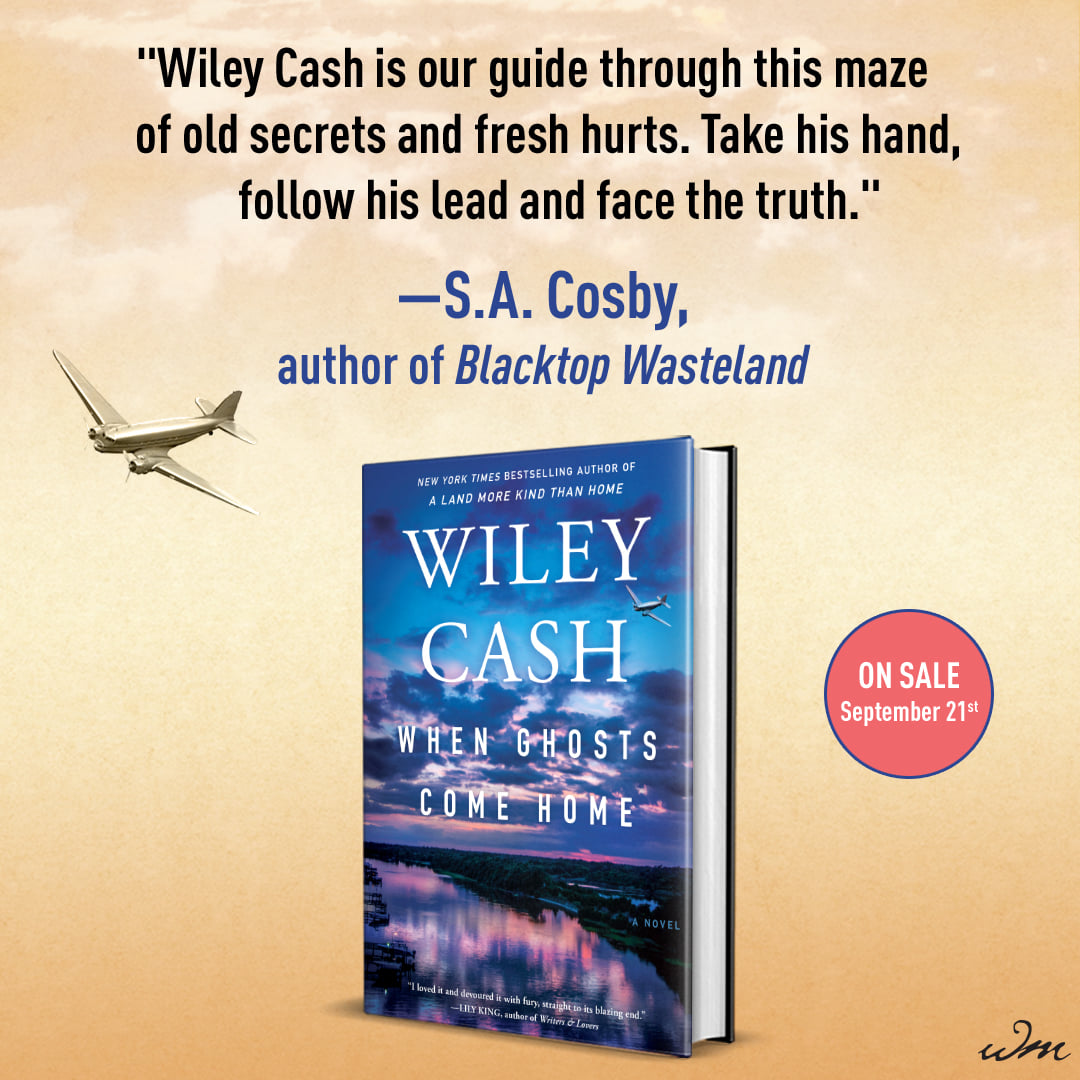 Wiley Cash is a North Carolina-based writer and writer-in-residence at the University of North Carolina Asheville. He sat down with us to discuss his newest book When Ghosts Come Home, a literary mystery set in the 1980s about a mysterious plane crash and the dead man left behind at the scene.

WNC: So, to begin, tell us a little bit about When Ghosts Come Home in your own words.

Cash: The novel opens in the fall of 1984 when a local sheriff on the coast of North Carolina is awakened in the middle of the night when a low-flying aircraft passes over his house. And he knows there is no good reason for an airplane to be landing this late. And he goes out to the runway and finds a crash-landed DC3 that has crash-landed on the runway, it’s completely empty, it’s been abandoned, and there’s the body of a local man shot dead and left lying on the side of the runway. And so this mystery springs up.

But what the novel is about on a thematic level is the turbulent eighties, and how that time is so connected to our contemporary time. How we in the eighties feared outsiders, and we often relied on racial stereotypes, on old suspicions to explain things we either didn’t understand or didn’t want to attempt to understand. I think there are a lot of direct throughlines that the novel draws from the mid-eighties to 2020 and 2021.

WNC: Where did the inspiration for When Ghosts Come Home come from?

Cash: My family moved back from West Virginia to North Carolina in 2013. My wife’s from Wilmington. I was at an event at another North Carolina university right after we moved back to Wilmington. Someone asked where I lived, and I said Wilmington, and this guy said, “Oh, I used to live on Oak Island, did you ever hear about a plane crash where the plane was abandoned, and they had to find someone to fly the plane away…” I thought that was a fascinating story. So that’s where the idea came from, but in terms of throwing myself into the work, I wrote about Southeastern North Carolina because I’m not from this place, but my wife is, and both of our daughters were born there. And if I was ever going to understand this place the way I understand Western parts of the state, that I’ve written about in three novels, I was going to have to do something about it, and the best way to do something about it when you’re a writer is to write about a place to really understand it.

WNC: All of your books so far have been set in North Carolina. What makes this state a place of interest to you in your writing?

Cash: Well, I’m from North Carolina, and there’s the old adage to “write what you know” and I certainly know North Carolina. I don’t think I’ll ever know it as well as I would like to, but I know it better than I know any other place. I think in terms of being a storyteller from North Carolina, it’s a great place to be a storyteller because there’s so much tension in this state. We have historic, tension, we have tension over the institution of slavery, we political tension and that every four years we’re a swing state, we don’t know if we’re Democrat or Republican or something in between, we have geographic tension between the coastal plains and the Piedmont and the mountains, we have cultural tension between sports teams and types of barbeque. I’ve told my UNCA students that all writing comes from tension, and these oppositional forces, and who’s going to give and who’s going to slide. And there’s so much tension in North Carolina that it’s a great place to find stories.

WNC: Your books touch on a lot of heavy topics, from racism to religion to history. Is social justice an area of interest in your writing, and if so why?

Cash: You know, I think it is. I talk to my students about writing from a place of tension, and as a middle-class white guy growing up in North Carolina, I haven’t faced a lot of tension from exterior forces in my life. You know, I’ve lost a parent, I’ve had my heart broken, but I don’t have socio-political-economic forces bearing down on me. So if I was going to write about myself, or characters very much like me, I don’t think I would be writing very interesting stories. And I think when you look back in history, you look at the contemporary moment, and you take all that political, cultural, historical significance, then the story is much more interesting.  And when you’re writing about those things, and you’re writing about history and culture and politics honestly, then I think you’re writing from a default position of seeking social justice.

WNC: All of your books are set in the past. Why do you set your story in historical decades?

Cash: That’s a good question. My most contemporary book is my second novel, This Dark Road to Mercy, which is set in 1998, and the book I’m working on now is set in 2018. But I think the present is hard for someone like me to write about, because I’m a student of history, a student of literature, and so in some ways I’m always looking at the previous moment and trying to make sense of it in order to read it in the contemporary moment. It’s hard to write about the contemporary moment. I’m not one of those writers that’s making profound statements about the contemporary soul of America. But I think that in writing about the past, we can come to understand something about who we are now. So that really interests me. But at the same time, my belief is that, if we’re being honest and doing the work, that all fiction is historical fiction. Even if we’re writing about yesterday, we still have to get the history of yesterday accurately.

WNC: How is When Ghosts Come Home different from your previous three novels? What new or familiar things can readers expect?

Cash: For new things, this is my first real mystery. This is a book where the readers are not going to know what’s happening until the end, this a book that’s got some twists and turns in it and I’ve never done that before. I’ve won mystery writing awards, but I’ve never written a real mystery. This is also my first book set in the eastern part of the state. This is the first book I wrote after having children and losing my dad. This book is similar in terms of narrative structure, timeline. Then in terms of what’s the same, I think that readers will recognize a devotion to place, strong characterization, these tight timelines that I often rely on. So there’s a lot new but there’s still the familiar feeling of something that I wrote.

Cash: Gosh, that’s hard. I think it’s more exciting oftentimes to write about children, to write through a child’s point of view, because there’s so much at stake in childhood. And the emotional register of a child is so vibrant and raw. They don’t differentiate between levels of hurt, levels of pain, levels of joy. There’s a baseline acceptance that “my dog died” versus “my grandmother died”, both of those are equally sad to children. And it’s a joyful thing to get in the mind of a child and view the world with such fresh eyes and to experience it with such a vibrant emotional register. And I’ve always loved coming-of-age stories---To Kill A Mockingbird, House on Mango Street---I’ve always loved those kinds of stories and so I like writing those stories.

WNC: Who are other writers who inspire you? In particular, were there any specific writers or books that inspired you while writing When Ghosts Come Home?

Cash: I’m always inspired by Ernest Gaines. He was my mentor in graduate school. He was the writer whose style and craft most resonated with me. And I read his work and I sought him out to study under him, because he was doing the kind of things with characters and place and dialogue and narration that I wanted to do. He is the influential ghost that hovers over my desk when I’m writing. But in terms of who I was reading and who I was thinking about while writing this novel, I had read Addica Locke, who is a contemporary mystery crime writer writing out of Texas. Her novels, Blue Bird, Blue Bird and Heaven My Home were big influences. Like, rural crime, police procedural stuff, I learned a lot from her. Another writer was Lily King, who had a book that came out a couple years ago called Writers and Lovers. I’ve got a young woman in her mid-twenties who’s one of the major characters in When Ghosts Come Home, and I learned a lot from Lily King’s book about the difficulty and struggles of young women coming of age in their twenties. So, those are what I was relying on,

WNC: What are you hoping most that readers will take from When Ghosts Come Home?