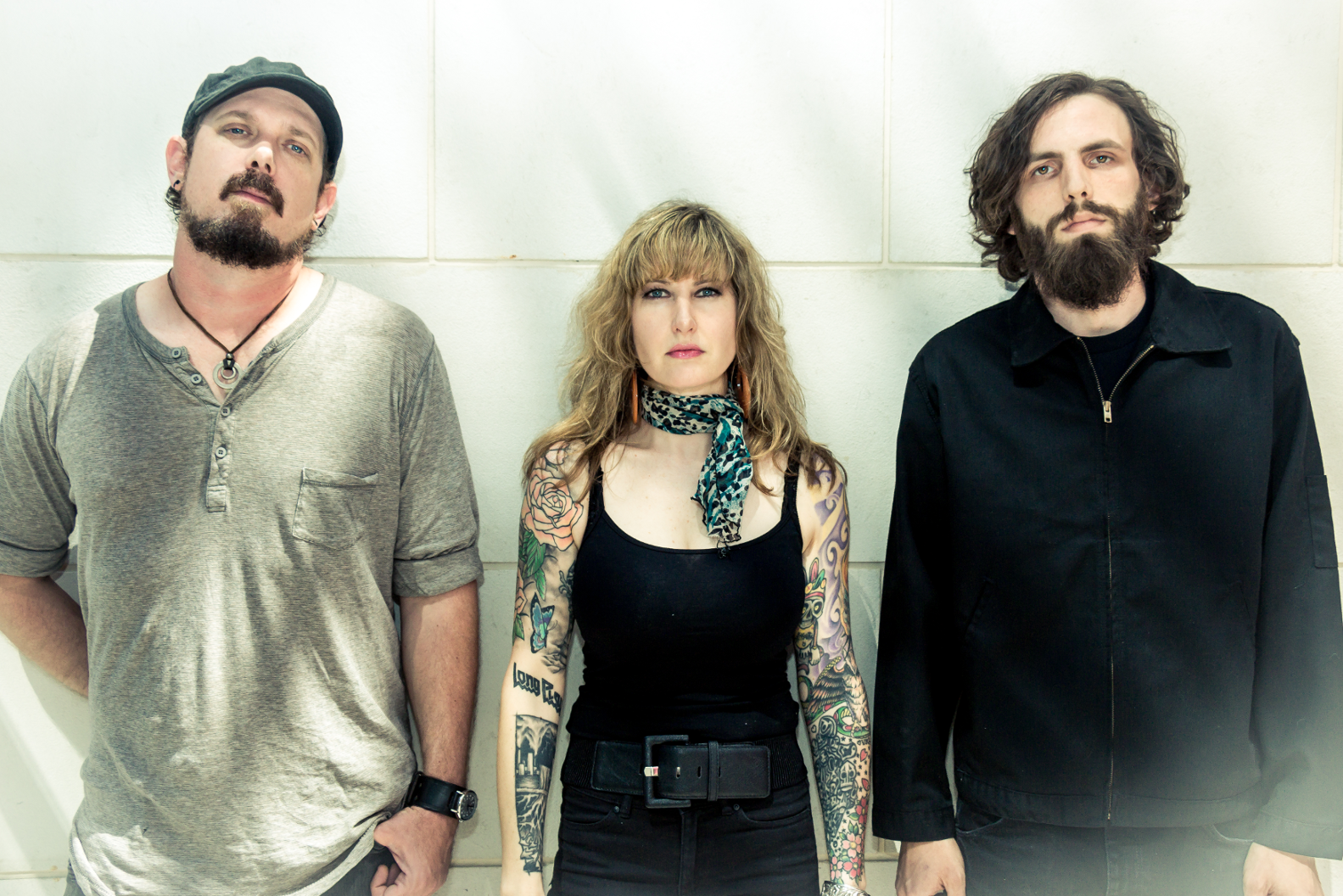 Savannah-based KYLESA are, quite simply, a force. Their new album, Exhausting Fire, dropped on October 2nd on the Season of Mist imprint. It’s an eloquent expression of a musical rebirth from a band that keeps innovating, a discovery of light within the depths of darkness. It’s a gorgeous album from a group that has continued to push against the constraints of genre to bring sounds together in ways that are haunting, beautiful, and unforgettable. KYLESA is also on tour, and will be at Asheville’s New Mountain on Saturday, October 10.

I have to admit, when I was first contacted about covering the band and the album, I was skeptical as to whether it would be my taste. What, I asked myself, is sludge metal, and why would I like something called “sludge metal?” I quickly found out that, yes, I really do like sludge metal, very much (if this is, in fact, the best way to classify KYLESA—actually, I think “dream rock,” another classification often used by their fans, fits even better. Really, though, I think they transcend generic labels). While no song is particularly uplifting (this is metal, after all), the album is gorgeous, and it also doesn’t bring me down. I could absolutely imagine raging to it on a bad day, but I can also listen to it when the sun is shining and the world is looking bright without it bringing on an energetic rainstorm.

KYLESA’s path has been defined by growth and evolution–sometimes in unexpected directions–since their formation in 2001. Singer and guitarist Phillip Cope notes that it was “basically formed from the ashes of another earlier band, Damad.” Singer and guitar player Laura Pleasants joined the original lineup, and Carl McGinley (percussion) has been with them for a decade. The band’s name comes from Buddhist tradition and signifies the demons that keep humans from attaining enlightenment. Although members of the band don’t identify as Buddhist, they find resonance in the idea that “you have to walk a middle path between good and evil, light and dark.” Cope says, We’ve always liked that–this idea that there has to be a middle path, both darkness and lightness.” This approach extends to all of their songs, which strike a perfect equilibrium between heavy and ethereal, moody and uplifting.

KYLESA is unique for a number of reasons, but one of my favorites again comes back to balance: the male-female vocalist team adds a nuance that many groups don’t possess. This balance “was there from the beginning,” says Cope. “Laura was there from the start. What’s rare about KYLESA is not just the fact that we have a very talented woman in the genre—it’s still somewhat male-dominated—but that we have two main songwriters that work together, one female and one male, and that’s rare. We’re not the only band that’s ever done that, but in general you don’t see a lot of that. So you’re getting two perspectives on a lot of themes. We discuss these perspectives and bring them into the theme of each album, a lot of times in the same song. We’re thinking about things a little differently.”

The band is known for the multitude of sounds they pull into a single song, and Exhausting Fire incorporates elements of psychedelic rock, hard rock, punk, and even classical. Taken as a whole, the album is a meditation on rebirth—the trial by fire that the title alludes to. Cope notes, “With our last album Ultraviolet, the theme was loss. We were trying to think where to go next and the idea of rebuilding became the theme. After loss, you’re trying to get your life back together and move on. The album looks at different aspects of this rebuilding. Some of that is facing what was lost and the consequences of that, finding a way through those hard times and starting fresh. Each song has a different take on that.”

There’s so much to appreciate here, from the vocals to the composition and the production, that it’s not really possible for me to sink into some of the sadder, badder stuff. The album starts hard and heavy with “Crusher.” From this first track, the balance between the feminine and masculine, yin and yang, is established, as Laura Pleasants’s voice floats ethereally, and at first wordlessly, over the deep chords of guitars. Her vocals—and the message behind them—are far from gentle. She intones solemnly,

The song expresses a deep hurt, the pain of heartbreak and the shuttering of the vulnerable spaces that were wounded through loss. It’s a brooding track that nevertheless shimmers with beauty—even if that beauty is barbed.

Although Cope makes his first appearance on “Crusher” as a backup vocalist, “Inward Debate” features more from him. His voice is rougher than Pleasants’s, a bit ragged and forceful but never an overwhelming scream. One reason why KYLESA’s music works so much for me is that they strike a balance between absorbing, obliterating volume and the nuances found in toning things down. One or the other can be too much of a good thing, but they hit the sweet spot right in between, as this song reveals. Harmony is never the casualty of heaviness, and that allows their transcendent melodies to make it through to the listener again and again.

Cope is also the lead on “Moving Day,” a song that details the heartbreak of an ending relationship at the moment when the inevitability of that end first becomes clear. As the guitar chords rise and swell over the vocals, a sense of futility settles in. Moving is just one of the motifs of the song. Drowning is another;

“Reach out my hand, just to be pushed down, in an endless summer, we will we will drown.”

The song pinpoints a very specific experience of hopelessness at the end of a life that, for a time, was shared. The song ends with an instrumental segment that gets heavier and then fades, just as the relationship being sung about will also eventually fade away.

The next song, “Lost and Confused,” is also the first single from the album, and I see why. It gives us the best of KYLESA: the lovely, lilting voice of Pleasants and the more anguished sounds of Cope, the heavy, melodic guitars and synths, the heartbeat of drums, and a deeply satisfying sense of this band’s ability to synthesize disparate rhythms and sounds. The more melodic sounds break into a heavier section that moves us from being lost in a moody soundscape into wanting to dance. Cope then leads us into the chorus, which joins both vocalists: “Two souls, lost and confused, with nothing to lose,” he sings, as Pleasants wordlessly intones in the background, coming in and out like sound from a distant dream. The song ends with a beautiful, minimalist guitar, playing the final notes of a lament.

“Shaping the Southern Sky” follows at the halfway point on the album. It starts hard and doesn’t let up, moving into grinding riffs that cascade and thump on the insides of your brain. Pleasants is here again, unifying things with her voice, which rises and falls alongside the pulse of the beat and the sound effect of something that sounds vaguely like a purr.

“Falling” drops back into a slower, more meditative tempo. The song soars through arcs of sound and moves into a heavier, grungier interlude halfway through. It just goes to show, once again, how versatile this band can get. “Night Drive” feels like a highly personal track, documenting the intense inner monologue of someone who really, really doesn’t want to be stuck in a car (“I don’t wanna be on this night drive, / I would rather be anywhere else”). It’s a dark song about a place we’ve all been—as Cope says,

It certainly succeeds in evoking that mood. It’s a fantastic example of KYLESA diving into the darkness and facing it head-on. But just as it’s becoming very claustrophobic indeed, the sound breaks into a psychedelica-infused riff that is richly textured and, frankly, pretty trippy. Lest you get too comfortable here, though, it moves quickly back into the most intense part of the song, which catapults you back into the heaviness. This time, though, it’s in a way that feels empowered, bigger than any space that might hold it in.

“Blood Moon” starts out dreamily, with a witchy, dark feel. There’s something soft here that is sustained even as the beats become unrelenting. It’s like walking into a midnight ritual that is about to get very interesting. “Growing Roots” follows, a thrilling ride into the depths and heights of sound. “Out of My Mind,” is a fitting end to the album. It starts heavy and gets heavier, picking up the tempo towards the middle as sound effects like gusting winds flow through the background and the guitars and drums get impressively loud. The album ends not with a whimper but a bang. It’s the best kind of sonic ass-kicking you’ll hear for a long time.

With an album this good, the show is sure to be an event, particularly since the band will have not one but two drummers. Cope says, “I’m probably the most excited I’ve ever been going on tour. We had a rarity we hadn’t had in a long time preparing for this: we had months working on what we wanted to do live and we’ve spent months practicing every day, hours a day. The full band right now is just super tight, very well-rehearsed. The set’s about an hour, and if you’ve never seen us before you can expect a pretty crazy light show.”

When I admitted that it would be my first metal show, Cope laughed. “Bring earplugs,” he said. Guys, this is going to be awesome.

Exhausting Fire is available on Bandcamp.