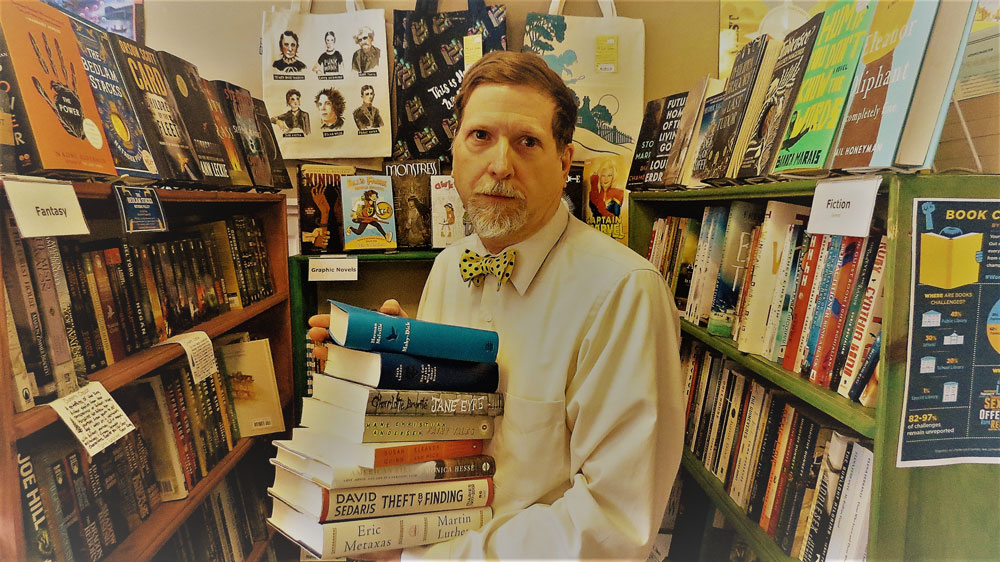 Two shows at this year's Asheville Fringe Arts Festival will be tackling issues important in our contemporary moment. Notably, both are also one-person shows. Mother Jones in Heaven and Ox, which concentrate on the historical activist Mother Jones and illegal immigration, respectively, will be performed at Fringe twice each. Fringe starts tonight with a kickoff party at one of the festival's newest venues, the Sly Grog Lounge, and performances begin Thursday.

Solo shows can present a special challenge to performers and to audiences unaccustomed to this particular form of theatre. In my experience, however, solo shows at past Fringe Festivals have been my favorite, creating an intimate space between actor and audience that is rare to experience. And importantly, solo shows are not created in a vacuum, but rather with the support of writers, directors, and others who play vital roles in the production process.

Such is the case with these two shows. Actress Vivian Nesbitt (of Breaking Bad, The Night Shift, and Longmire) will play the titular Mother Jones of Si Kahn's musical, and she'll be supported by director Alice Jankell and musical accompanist John Dillon. Actor Mark Suggs stars in Ox as a bookstore employee under the direction of writer Derek Davidson.

A Passion for Change

Called "the most dangerous woman in American" during her lifetime, labor activist and community organizer Mary Harris "Mother" Jones is the subject of Mother Jones in Heaven, which takes a deep dive into the woman behind the reputation. Actress Vivian Nesbitt, who shares Irish ancestry with Mother Jones, was drawn to the musical, and the character, during the Obama administration, but elected not to perform the piece. After the election of Donald Trump, however, the timing seemed right.

"There's an education that I think has been lost about Mother Jones, the working class, and the poor," says Nesbitt. "And so I think she really needs to get back out there and start cracking some heads." 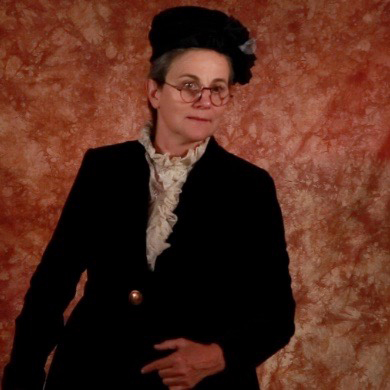 Jones had a reputation of being a firebrand, a petite woman whose swagger and foul language gave her an entrée into circles that might otherwise not have been so welcoming. Although she was known for many accomplishments during her life, two of her greatest were banding together mine workers and their families against mine owners (the event that gave her that intimidating moniker of "most dangerous"), and organizing a children's march from Philadelphia to the home of President Theodore Roosevelt, in New York, as a protest of inadequate child labor laws.

"As a contemporary society, we just don't run on the kind energy that Mother Jones had to pull from," reflects Nesbitt. "All that anger and forthrightness, drinking and swearing, that much passion is  kind of not what we do in the 2000s. We're sort of 'evolved,' we think we've gotten around all that.

"But she just burns with it," she continues. "So to bring that to the stage is a really interesting and terrifying thing to do. There's plenty to be angry and militant about. I recently saw a headline saying Trump is thinking about cutting overtime hours. Mother Jones worked for United Mine Workers of America, and they fought for the eight-hour work day, so the timing of this could not be better."

Besides being a solo show about an impassioned organizer, the performance is challenging for Nesbitt for another reason: the songs. The full show, which will be truncated for Fringe (from 80 minutes down to an hour), includes 14 of them. "The songs are absolutely beautiful," says Nesbitt. "They're profound and funny." She notes that they are folksy, but with a clear Broadway spin, an influence that adds an unmistakable, vibrant energy to the production.

"I've always wanted to do a musical," says Nesbitt, who is a singer. Her accompanist, John Dillon, is also her husband. The two perform together in a folk duo, and he'll play guitar for this show. "To take this on requires a certain fitness and complete commitment," she says. "A physical, vocal fitness and also a mental fitness that you can actually pull it off. It's one thing to do a monologue solo show, but this is taking it to a completely different level. And I have to do it. It's as if my spiritual self is throwing down the gauntlet, saying, 'Now's your chance.'

"I hope people will come," says Nesbitt, "because the music is singalong music, it's toe-tapping music, and the message she brings to light is so important. You really get to see the woman behind the personality, what was making her tick and pushing her forward. It's kind of easy to do the ass-kicking, embittered, loud, feisty version of her. At 5' 2", she was itty bitty and took no prisoners, but she also came to it later in life, in her mid-40s. And that's really what this play focuses on, and who she represents for me."

For Nesbitt, Mother Jones ultimately reveals something about humans' potential for greatness. "She took that suffering and that rage and could have ended up a drunk on a street corner," she says, "and she probably had her moments! But there was something about her. She had a fierce ego, she loved hanging out with people in power, and she was really no princess. There were parts of her that were problematic, but they helped to make her someone who was known and feared by politicians."

Nesbitt considers Asheville Fringe to be a launch point for the show. Writer Si Kahn, who is a labor organizer, will also be present. Mother Jones in Heaven will be performed on Thursday, 1/25 and Saturday, 1/27 at Magnetic 375 (375 Depot St.) from 7-8 p.m.

Downtown Books and News will be used to full effect during Ox, a solo performance from In/Visible Theatre of Boone. Penned by Derek Davidson, it's about a bookseller who discovers a family of illegal immigrants living in the stacks. 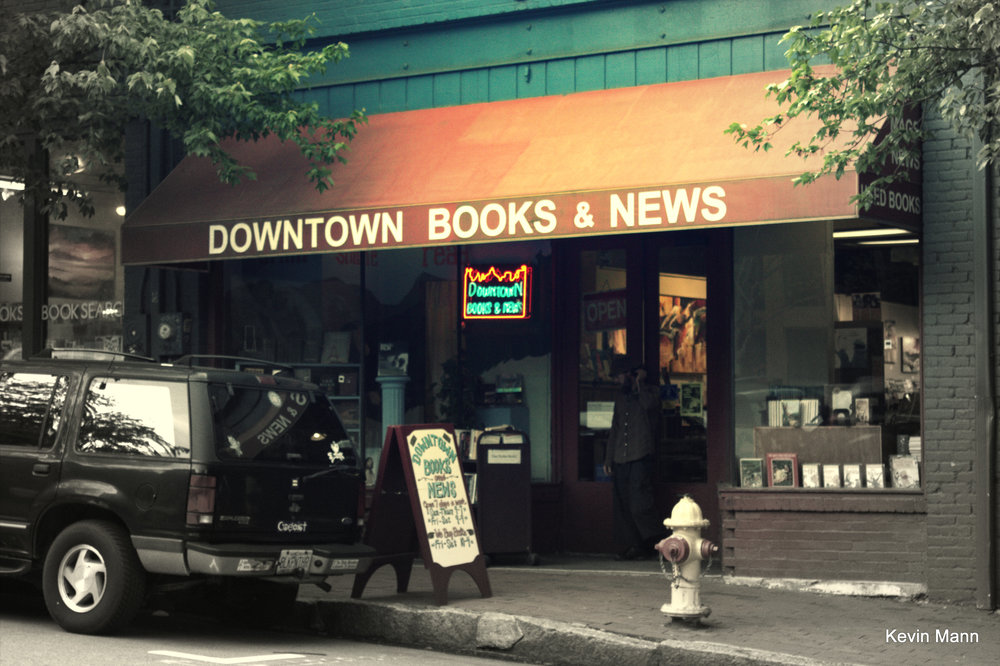 The topic was new for Davidson, but it also fit into his larger body of work. "You look back on your work over the years and realize there are certain preoccupations that come to the surface," he says.  "I realized epistemology seems to be in everything I work on, ideas about knowing and how we know, or how we think we know and don't actually know shit. And bookstores, like libraries, are repositories of knowing and education. So I wanted to do an informal personal meditation on how you know people and how you judge them in the same sort of slapdash, superficial way that you judge books when shopping at a bookstore."

The narrative follows a bookstore manager who is going over the requirements of the job with a group of new employees (the audience). This is the first time the play will actually be performed in a bookstore, which Davidson and actor Mark Suggs are excited about.

"It's a very intimate play," says Suggs, "and we think the audience is going to feel especially connected because we're in an actual bookstore."

The play gripped Suggs from the beginning. "When I first read it I was blown away," he says. "Even when I go through it and rehearse it I find more and more connections I had no idea about. It's very layered. The content is amazing."

Davidson even surprised himself as he was writing it. "The ending surprised me," he says. "I usually have sort of a sense of a thing's trajectory, and this one surprised me—not only where it ended, but what the character ends up doing and the final literary reference. That was not planned. In fact," he laughs, "it made me have to go back and add a rabbit."

The part of the manager was written with Suggs in mind. "It is particularly delicious being able to write for a specific actor," says Davidson, "and it's not a luxury playwrights are often allowed to indulge in. I have immense respect for Mark." They met when both were teaching at Appalachian State, but it was when Davidson performed in a staged reading of Richard II with Suggs several years ago that he realized they should work together through In/Visible Theatre, which runs its own Fringe-style festival, the Boone Solo Performance Festival, in the High Country. "This was a wonderful gift for me as a playwright," Davidson says. "It's like being able to shop in a specialty store rather than going to Ingle's."

Suggs, for his part, is thrilled to be involved. "This character is someone who is self-confessed that he's not political, and is not one to get involved," says Suggs. "And the story explains how someone comes to move from being a spectator to being smack dab in the middle of something. That's a beautiful arc."

Want more Fringe? The whole schedule is online. Get your tickets now.