Founder of Asheville Beat Tape Collective Plays One Stop May 8

Founder of Asheville Beat Tape Collective Plays One Stop May 8 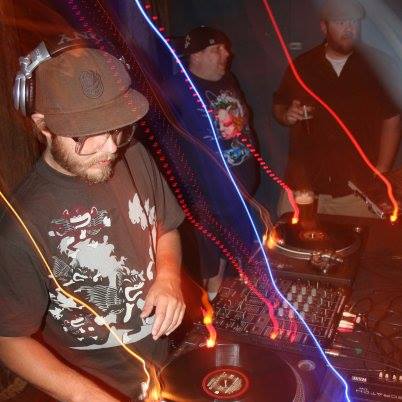 Deep Assembly: Nigel One with Delta Quadrant, Earthtone Soundsystem at the One Stop

Producer Nigel One (his Soundcloud here) made his mark on Asheville through his chill blend of hip hop- and house-inspired beats that incorporate a dizzying variety of sounds and flavors. A long-time presence in the Asheville scene, Nigel One was an instrumental member of the local electronic music as the founder of the Asheville Beat Tape Collective, a group that, in its current iteration, seeks to join Asheville’s talented producers through a supportive, networked community that expands our city’s presence on the national scene.

For one night only, on Friday, May 8, Nigel One will be crafting beats to move to at The One Stop for "Deep Assembly."

It’s his first show in Asheville in several years (he relocated to Kalamazoo, Michigan) and it will be a celebration—a return to his roots but also a step into his constantly evolving sound. A recent interest in bringing in influences from global music means that Nigel One constantly unites elements from different aural worlds together through his organic, smooth beats. Nigel One’s music is always layered, revealing a satisfying complexity that never gets too cerebral—rather, it’s grounded in danceable beats and satisfying base that unites with a willingness to get experimental. This is the kind of music that dares you not to have fun. He looms large on the local music circuit, and his homecoming performance, which will showcase the best of his beats, will also bring Delta Quadrant (John Brinker) and John Hughey (Earthtone Soundsystem)  two  renowned local talents, to the stage.

I spoke with Nigel to find out what to expect from the evening.

Ali: This will be your first show in Asheville in several years. What are you most excited to share with people? Can you give us a little run-down of what to expect from your set and the show overall?

Nigel One: Yes I haven't played a show in Asheville since Bobo Gallery closed down a few years ago. Since then I've mostly been playing in the Midwest since I'm based in Michigan now. People should expect good vibes and good dance music because that's what I do. The local support is from Delta Quadrant (aka John Brinker) and Josh Hughey of Earthtone Soundsystem, who are two of the best around. I'll be showcasing the house music side of what I do on this evening because my people in Asheville like to dance and I love djing for a lively crowd. You can expect to see some of the core people from Asheville's late 90s and early 00's scene because that's where my roots are.

Ali: What do you feel the Asheville community has to offer the wider global electronic music scene?

Nigel One: Asheville is—and has been for a while—a creative hub. There are not that many cities, especially the size of Asheville, with such an amazing pool of talent. Asheville has community like no other too, so the fact that musicians know each other and are around each other so much makes it stronger as well. I think what it has to offer the world is an example of working together on a local level. These days there is so much emphasis on the internet, and although the positivity and productivity that happens in online art communities is undeniable there is something powerful about artists working together face to face in physical reality. I think another thing the AVL community has to offer is a good DIY work ethic, because even though venues support our music now this wasn't always the case. We threw parties in all kinds of spaces, both legal and illegal, before the Asheville venues got on board with it.

Ali: What are some of the biggest influences on your own music? How are more international influences showing up in your music right now?

Nigel One: The biggest influences on my music have been people in my life—both musicians and not. I have been inspired by all kinds of music but I am more inspired by experiences and non-music related things. My music has always drawn inspiration from different types of music from all over the world. In the past few years I've had the opportunity to work with and release music with musicians from South Africa, Brazil and Europe, and it has definitely gotten me to look deeper into my favorite music and its roots. Race issues are something I think about often and I believe music can bring us all together. With the popularization of beat music, house, and other styles I deal with, I have also seen a sterilization in the sound. One of the things I noticed in house music especially was that I was hearing less ethnic sounds in the genre than when I first got into it. A lot of people get into stuff like Fela Kuti, Tito Puente, and other non-American sounds through house music and vice versa.

One thing I liked about it early on is that it made you go check out more styles of music from all over the world. Same case for drum n bass and hip hop of the 90s. I feel like I'd like to add that world music element back into it. I still can get down with some straight up American music too.

Ali: What are some of your most recent projects and collaborations?

Nigel One: My latest collaborations include, but aren't limited to, working with Brazilian-born Seattle-based singer/horn player Michel Navedo, Jaymz Nylon (owner of Nylon Trax and veteran Afro-Tech dj/producer), Leey Keps of South Africa, Blunted Monkz of Stuttgart, Germany, and many more. Recently I've been recording my raps over Detroit-born Kansas City producer Mela9. I've got some other stuff in the works too but don't wanna jump the gun and talk about it too much.

Ali: You started the Beat Tape Collective in Asheville several years ago as a way to promote connections and collaborations between artists in the area and beyond. How successful do you feel you were, and (if you can begin to answer this) how has the scene evolved since then?

Nigel One: I actually started it strictly as an Asheville thing originally. Proflogik and 10th Letter didn't live in Asheville but I was having them up a lot so they were really a part of our scene. I think it was a huge success from the beginning because before I organized the first Asheville Beat Tape compilation a lot of us didn't know each other existed. I was in the house and hip hop scene so I knew a lot of people from those scenes who didn't know each other as well as a more electronic scene that was emerging at the time. I mean, we had some names on that compilation that have gotten pretty big over the years, like Two Fresh and Proflogik. How successful was I? That's hard to answer. It was never about me so I never really considered any of its success to be mine. Since I moved from Asheville it has evolved into a much bigger beast and my jaw drops sometimes when I see some of the events they are doing and moves they are making. Asheville wasn't quite ready for us to bring the beat tape music to a stage when I lived there. The scene was very dance-centric in the early days, and if you weren't playing dubstep or glitch hop you just weren't gonna bring in many heads through the door. This made it hard to book national and international talent in the beat genre because you pretty much knew it was gonna nose dive. The fact that cats like Mndsgn and Mono/Poly are coming through for ABTC events shows me it grew a lot since I left. The dudes who handle ABTC now are awesome guys and true to what my vision was in the beginning so I'd say it's grown awesomely.

Big shout outs and respect to Panther God, EmE and Samuel Paradise for holding it down and just for being the awesome cats that they are.

Nigel One performs as part of “Deep Assembly” at the One Stop on Friday, May 8, alongside Earthtone Soundsystem and Delta Quadrant.

This is a free show, a gift to Asheville from one of its most influential producers.

Things get rolling at 10 pm.