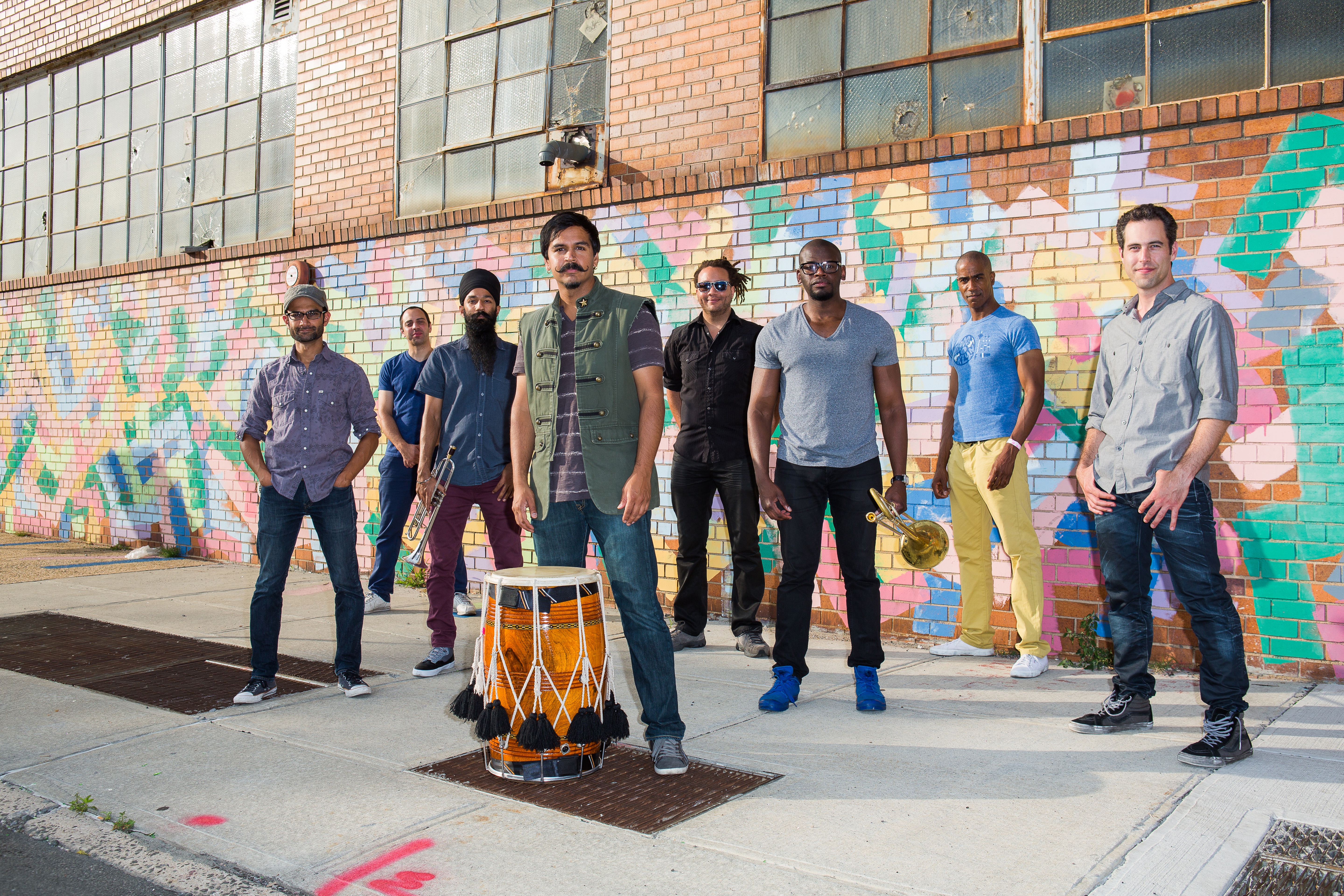 Red Baraat is easily one of the most unique acts currently on the tour circuit. Formed in 2008 in Rochester, NY, the 8-piece Dohl ‘n’ Brass ensemble fuses Punjabi rhythms and Indian brass band traditions. The result is a high-energy sonic assault of circus-like proportions. Red Baraat’s music is undeniably infectious, their live performances not only grab your attention but command it.

Red Baraat is lead by frontman Sunny Jain on a double-headed Dhol. Growing up as a first generation Indian American, Jain was exposed to a combination of Indian classical music and devotional songs at home along with a variety of 1960s Bollywood reel to reels that his father would play. When conceptualizing Red Baraat, Jain drew from his early musical education, his familial and cultural roots, and set out to form “a large band with a massive sound, but just drums and horns.” However, his intention was not to simply replicate a previously existing genre, but to utilize it as a foundation and incorporate various and unique elements to create something altogether new.

Jain elaborates on this in the bands online bio stating, “We feel comfortable not knowing exactly where we’re headed. We’re very much about trying things out and taking risks. Sometimes it doesn’t work,” he laughs, “and sometimes we stumble upon things that are really exciting.”

One constant of Red Baraat is Jain’s decision to place the Dohl front and center. The Dhol is the dance drum of northern India, commonly heard in the film music of Bollywood. Live, there’s an exciting drum line-esque performance element that the Dohl brings to the mix. The band has also adopted the double-headed drum as it’s logo. A fitting iconography of both Red Baraat’s music and the cultural foundations and associations of the band.

In my research for this piece one of the things I found lacking in existing reviews was any mention of the Hip Hop elements that exist within the band’s music. Perhaps not lyrically, but sonically, so much of what makes Red Baraat’s music anthemic is the beat and how the horns progress through each composition. Those combined elements are the same reasons that marching band drum lines and New Orleans-styled brass bands are so frequently associated with segments of Hip Hop, they provide a cadence. “Horizon Line”, specifically, sounds off with an energy fit for the background music of professional sporting events, television, and major motion pictures. My money says that in 2016 we’re going to be hearing this track everywhere.

In conclusion, Red Baraat is the real deal. Both in composition and performance, it takes authentic talent and dedication to bring this many players together to create a cohesive and groundbreaking sound. If you’ve experienced and enjoyed the live performances of multi-cultural big bands like Gogol Bordello, Ozomatli, or one of the many brass bands out of the Crescent City, then tonight’s show is not one to miss.