Beach Goth @ New Mountain: An Evening with the Growlers June 10

Beach Goth @ New Mountain: An Evening with the Growlers June 10 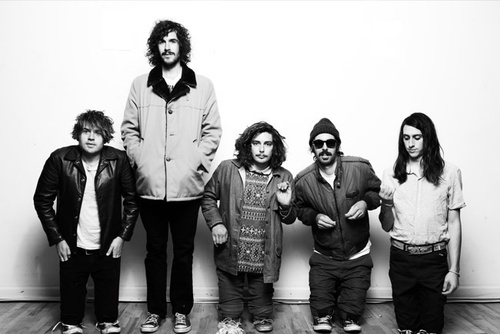 The psychedelic sounds of the Growlers, purveyors of “Beach Goth,” are coming your way on June 10th to New Mountain AVL. The band’s music, which does at times sound like a black-clad teenager’s vision of California dreaming, melds darkly poetic lyrics with the jangly guitar of surf-rock. It’s a midnight bonfire on a haunted beach, and you’re invited.

The band hails, perhaps not surprisingly, from California, but while the music could easily fall into clichéd territory, The Growlers are always on the edge of darkness, eschewing utopian visions in favor of experimentation and an on-point critique. Vocalist Brooks Nielsen’s lyrics are delivered in a way that is sometimes deadpan, sometimes emotionally charged. The band makes use of distortions like reverb and other effects, adding to the sense that the message being delivered is itself coming to you through layers of meaning (some of it dripping in irony) and themes. Songs engage with a world that is everyday becoming more simulacrum than reality.

The Growlers’ latest album, Chinese Fountain, released in 2014 on the Everloving Records imprint, is a perfect example of the band’s witty engagement with a world that is always stimulating but rarely satisfying. The title track itself invokes the practice, more or less emptied of any significance, of throwing a coin into a fountain and making a wish.

“Dull Boy” begins with an anthem to a suffocating consumerist society: “Lost in the valley of malls / The kids are all eating themselves / Living on capsules and balls / Thinking that there’s nowhere else at all.” Songs alternate between the acceptance of a jaded and powerless existence and a drive to find meaning and break out of the hypnotic sway of the modern world. "Going Gets Tough", for instance, seems like yet another song about futility, but a surprisingly honest refrain seems to move into a moment of vulnerability: “Still always remembering / When the going gets tough / That the labor of our love / Will reward us soon enough.” Whether the feeling is heartfelt or not, the sentiment is there, and the bouncy guitar makes it hard not to believe.

One of the final songs on the album, “Rare Hearts”, even gets hopefully romantic: “Is it too much to dream/ that we can forever be/ rare hearts that never disagree?” The tone doesn’t stay this optimistic for long, however, and “Sunset Drive” takes us to what might be read as the inevitable end of the relationship in “Rare Hearts,” when “lonely Sunset Drive’s the only thing that’s left.”

But for all the pessimism here, The Growlers never lose heart. Chinese Fountain (and the entirety of The Growlers’ oeuvre) is as perfect for a drive down the coast in the heart of summer as it is for a moody late-night show. This pretty much guarantees that no matter what kind of mood you’re in, the set will have something for you. The Growlers seem to say that the search for meaning is futile, but when the music is this much fun, you can forget about that for a while.

Two opening acts round out the evening. BRONCHO hail from Oklahoma and make infectious music inflected with a big dose of Warhol-era punk and, on songs like “Class Historian,” a hint of the spacy, sugary sounds of the New Wave. Boone-based The Nude Party brings their psychedelic rock to the stage to get things rolling. Don’t miss the show that is guaranteed to jumpstart your summer, even if you’re going to spend it moping around.