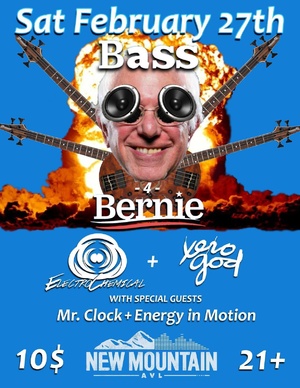 The Blizzard of 2016 can't put out the fire! This Saturday, February 27, New Mountain Asheville hosts its rescheduled event: an evening of "Bass 4 Bernie," a benefit show for the Bernie Sanders campaign. Headliners ElectroChemical and Xero God will play with support from Mr. Clock and Energy in Motion. Half of all proceeds from the event will go to the campaign, and there will also be an opportunity to register to vote (with forms in both English and Spanish).

The event is a lead-up to the March 15 democratic primary, which will pit Sanders against other candidates in an effort to win the nomination. While the event is designed to support Bernie's campaign, the music itself is definitely bi-partisan. It's a chance to see the hottest electronic performers in town while you're Feeling the Bern.

The Bernie Sanders success story has thus far been written on the pages of local scenes across the nation. This show is no exception, and it's precisely this kind of grassroots event that has made the campaign so thrilling. It's a perfect time to get out and get hyped up about the fact that we live in a country where voting and letting your voice be heard really can make a difference.

Voices will indeed be heard, and beats dropped. Headliner ElectroChemical is particularly excited about the night. According to member Will Davis,

Bernie Sanders has ignited a real fire in the hearts and minds of progressives. In all of my time obsessing over politics I've never heard a mainstream candidate speak out so courageously on the real issues most politicians ignore. Campaign finance reform, systematic racism, private prisons, widespread economic inequality, the drug war, climate change, the list goes on and he's got the record to prove it. So this event is all of us doing our part to spread the word, get people registered, and throw down for a people powered political revolution that starts right here right now!

ElectroChemical will be keeping this fire lit through their psychedelic progtronica vibes. Members Davis (bass, production) and Wayne Redden (drums) make the beats while Soup Williamson (Life in Art Studios) creates the visuals. The group's unique combination of produced and live music makes their shows an experience like no other. ElectroChemical turns up the funk dial on electronic music and then throws trippy visuals at you to ensure a set during which you may actually transcend this physical plane. Check out their LP, Simplexity.

Xero God will provide a perfect counterpoint to ElectroChemical's flowing, spacy jams with their beat-driven hip-hop vibe. With Panther God (Paul Gaeta) on production and Musashi Xero (Tyler Jackson) on vocals, Xero God blends together the soulful and the experimental in its one-of-a-kind sound. Musashi Xero's socially-aware poetry has a rhythm all its own, offering both acerbic commentary and hopeful predictions for our human experience. Panther God's beats are deep, intelligent, and complex, twisting and turning around the vocals in ways that are organic and transformational.

The beats go on with a set from Energy in Motion, the Asheville-based quartet whose sound was birthed on the festival circuit and is a perfect fit for the beautiful Blue Ridge Mountains. It's funkadelic music that will have you grooving through the cosmos.

Rounding out the evening is Mr. Clock, Asheville-based electronic groovemaster whose songs are explorations of highs, lows, and everything in between. Mr. Clock's shows combine the aural and the visual to create a perfect storm of dope-ass music for your listening pleasure. Mr. Clock's sets bring the laser light show, the electronic production, and the instrumental together to ensure that you will get lost in the sound.

Don't miss this chance to Feel the Bern and dance like there's no tomorrow (aka what would happen if Trump won). Tickets are $10. Don't sleep on this one.