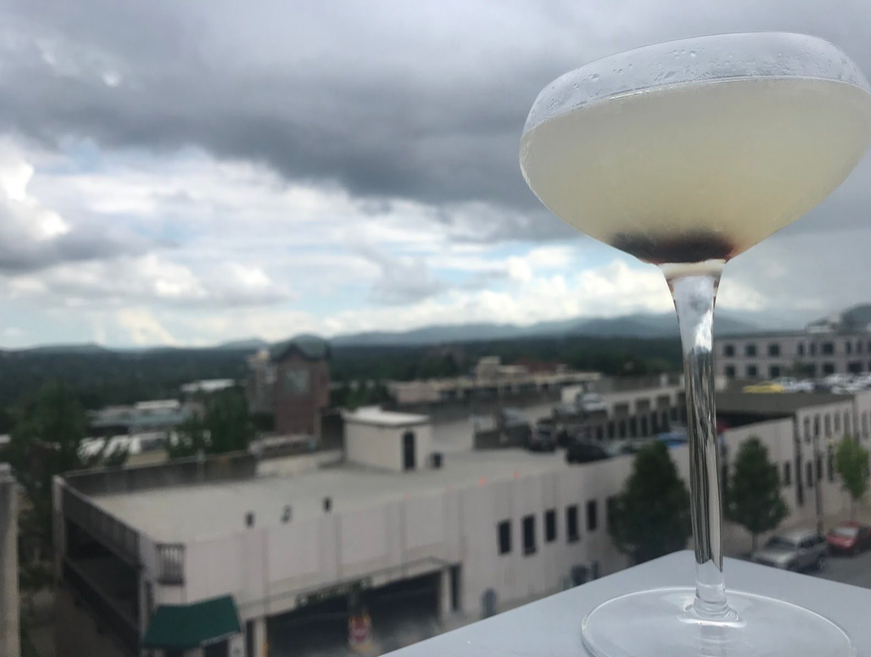 The Hemingway Daiquiri at Hemmingway's Cuba

It's time to enjoy the first sips of summer. Sunshine, outdoors, friends, good food and a perfect cocktail in hand are my favorite ways to celebrate this time of year. And in 2018, Asheville has more craft cocktails and sunny patios to offer than ever before. So, I took one for the team (you’re welcome) and headed out to discover some of the best sips (and patios) of the season and where to drink them. Here are three

The back patio at Storm sometimes gets forgotten and perhaps that may be why I like it. Sitting on the back deck in front of the fireplace on cushy patio furniture surrounded by flowering plants feels more like sitting in your own backyard than at a restaurant, with the one glorious exception rant, with the one glorious exception that someone will serve you one of my favorite Asheville cocktails.

The Devil’s Oasis at Storm Rhum Bar has been on the menu since the restaurant’s conception in 2011. The drink balances the sweetness of golden rum and passion fruit with sour lime and a sublimely spicy cayenne honey and is topped off with a Kracken rum float. Even after 7 or more summers of ordering this drink, I haven’t tired of this “old faithful” of Asheville cocktails. And since the craft cocktail boom, it holds a bit of nostalgia as one of the first complex cocktails I had once moving here over eight years ago.

The Hemingway Daiquiri at Hemingway’s Cuba

And speaking of “old faithful,” my next stop takes me to my newest favorite rooftop destination, Hemingway’s Cuba. Looking west over the mountains and downtown Asheville, Hemingway’s is vaguely reminiscent of Havana’s famed hotel with rooftop bar, Ambos Mundos. Chef Duane Fernandes (formerly of Isa’s Bistro, Horizons and has also worked under Thomas Keller at Per Se in New York) is serving up cuban-inspired favorites such as ropa vieja, media noche and my favorite menu item, mojo-marinated chicken wings.

I sat down with restaurant manager, Julian Ramirez, and discussed the finer points of Cuba’s most famous cocktail, the daiquiri. Julian’s mother and father immigrated here directly from Cuba and he indulged me with the history of the daiquiri and Hemingway himself. The original daiquiri was likely a spinoff from the “grog” British sailors drank aboard ship in the 1740s and gets its name from the beach near Santiago de Cuba of the same name, a Taino word. It was just rum, lime juice and sugar served over ice.

Hemingway himself, however, was a diabetic and refrained from the sugar and so a cocktail was concocted just for him at La Floridita in Havana that replaced the sugar with maraschino liqueur and grapefruit juice. Hemingway always ordered his as double and it was nicknamed “Papa Doble”. This is the variation of the drink, with just a single shot of rum, that is served at Hemingway’s. Theirs is Barcardi Silver, Luxardo Maraschino Liqueur, grapefruit, and lime garnished with an Amarena cherry and served in the traditional coupe glass. Julian also made me his special daiquiri with Plantation Pineapple-infused rum. This special rum was created during a collaboration at Tales of the Cocktail in New Orleans in 2014. Though not originally intended for sale, it became a “victim of its own success” and is now available everywhere, according to the company’s website. I highly suggest giving this variation a try. It is something truly special.

Smash it Up at Aux Bar

I've been saying since they opened that Aux Bar has put together a dream team of Asheville’s finest hospitality staff. From the chef owners, Steven Goff and Mike Moore, the stellar line including Chris Cox (formerly of the Montford Pull Up), to the front of the house with Andrew Boyd as manager and Jennifer Gordon on the bar, this restaurant is slaying it in the staffing department. And it shows in the quality of the food, the service and the cocktails. Throw in a cozy patio and it is quickly becoming one of my favorite new spots.

With two rum drinks on my list so far, I wanted the next drink to feature a different spirit. Jen had just the thing with her take on a whiskey sour which is on their current menu. The drink is called a Smash it Up and is Virgil Kaine Rye Whiskey mixed with Domaine de Canton (a ginger flavored liqueur), house-made strawberry rhubarb shrub, lemon, Crude “Bitterless Marriage” bitters (hibiscus, lavender and oak) and in keeping with tradition, egg whites. After being vigorously shaken, it is poured over a giant ice cube, sure to keep it cold to the last sip even on summer’s hottest days.

One of my favorite things about Jen’s mixology is her attention to the complexity and balance of a drink and the Smash it Up is no exception. The initial flavors are sweet from the strawberry and acidic from the lemon and the shrub (hers is made with apple cider vinegar). This is followed by the welcome booziness of the rye. And finally the warm, spicy bite of the ginger rounds out the entire sip. With the flavors of spring and early summer, this drink is refreshing, yet complex. It was masterfully crafted and is best enjoyed while watching the tourists stroll by on Aux Bar’s Lexington Ave covered patio.

Kelly Denson is an experienced event producer and owner of Lush Life Productions She enjoys discovering craft cocktails, local spirits and is always searching for the perfect patio.