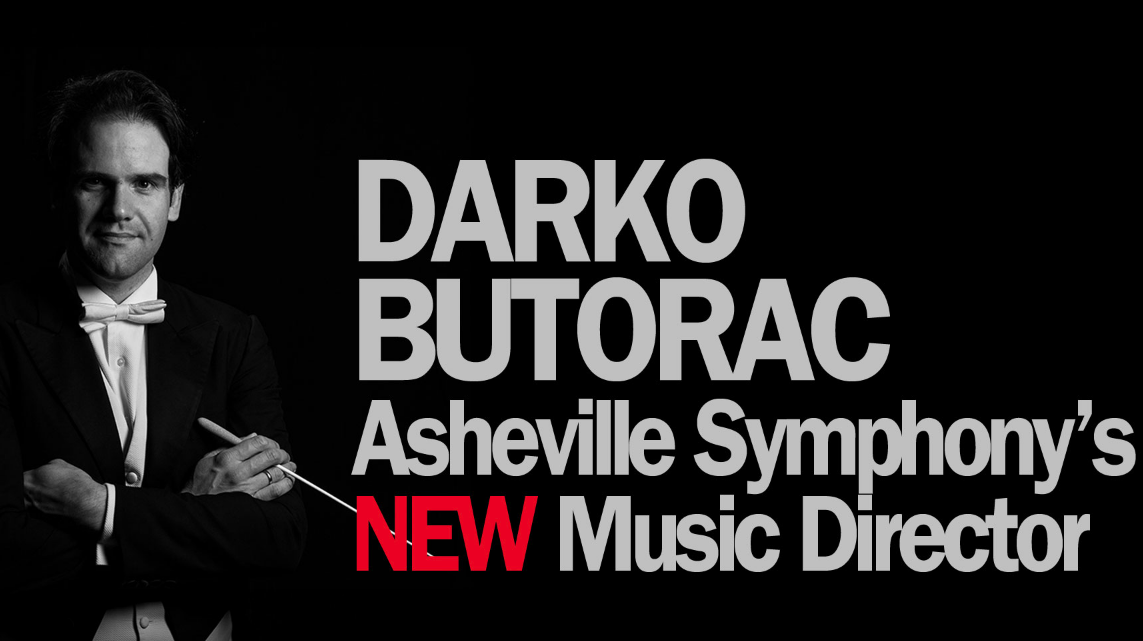 Here's some exciting news from the Asheville Symphony:

Asheville Symphony Board of Directors President Doris Phillips Loomis and Executive Director David Whitehill are pleased to announce that conductor Darko Butorac will become the organization’s next music director beginning with the 2018-2019 Masterworks Season, which opens in September.

“This is an exciting time for the Asheville Symphony,” said board president Doris Phillips Loomis. “Darko Butorac is a talented and passionate conductor as evidenced by his wonderful audition concert last November. The symphony board is eager to see what his leadership of the Asheville Symphony will bring to our community.”

As the new music director, Butorac will conduct the majority of the symphony’s 2018-2019 Masterworks Season concerts, beginning with the season premiere on September 15.

Butorac is an established conductor in demand with orchestras both in Europe and the Americas. He has appeared at prestigious venues such as the Vienna Konzerthaus, the Gran Teatro Nacional of Lima, Belgrade’s Kolarac Hall, Teatro Magnani in Italy, as well as at the Tartu, Aspen and Brevard summer music festivals. He has collaborated with soloists such as soprano Renee Fleming, cellist Colin Carr, violinist Lara St. John, and Oscar-winning actor J.K. Simmons.

“I am deeply honored to have been selected as the next Asheville Symphony music director,” said Butorac. “I felt the orchestra and I had a very special connection during my audition week in Asheville and I am excited about getting to know the orchestra members better. In the season ahead we will be working together on some incredible repertoire including Shostakovich’s Fifth Symphony, Rachmaninoff Concertos with famed pianist Garrick Ohlsson, and Stravinsky’s The Rite of Spring. I very much look forward to getting to know the vibrant Asheville community, and to exploring its beautiful surroundings.”

“The appointment of a new music director for the Asheville Symphony is an important moment for our community,” said Jerry Hornowski, UBS Financial Services Asheville branch manager. “Darko Butorac will not only be the leader of the orchestra, but also a musical leader in the greater Asheville community. We are pleased to sponsor the music director chair and look forward to the wonderful music Mr. Butorac will create with the Asheville Symphony.”

Selection of the new music director followed an intensive worldwide search. After receiving more than 400 applicants, the Music Director Search Committee, which included orchestra musicians, board members, and staff, narrowed the field to six finalists, each of whom visited Asheville and conducted an audition concert with the Asheville Symphony during the 2017-2018 season.

“Finding a music director to lead this organization into its bright future was no small task,” said Jack Anderson, search committee chairman and symphony board member. “After interviewing and meeting the finalists and receiving input and feedback from all corners of the Asheville Symphony community, we feel confident that Darko Butorac is the right person to take our orchestra to new heights.”

Butorac was the 2004 Grand Prix laureate of the Fourth Vakhtang Jordania International Conducting Competition, an honor that led to engagements with orchestras across four continents. He has also appeared at the Bruno Walter National Conductor Preview hosted by the League of American Orchestras and the Jacksonville Symphony.

He is an avid traveler and is passionate about discovering the world and bringing people together through the beauty of music.

“Our symphony has been in an incredible phase of growth with an expanded youth orchestra program, the first two Asheville Amadeus festivals, and two studio recordings,” said executive director David Whitehill. “With Darko Butorac at the helm, we’re poised to build on that growth in the coming years and further expand this unique organization’s horizons.”