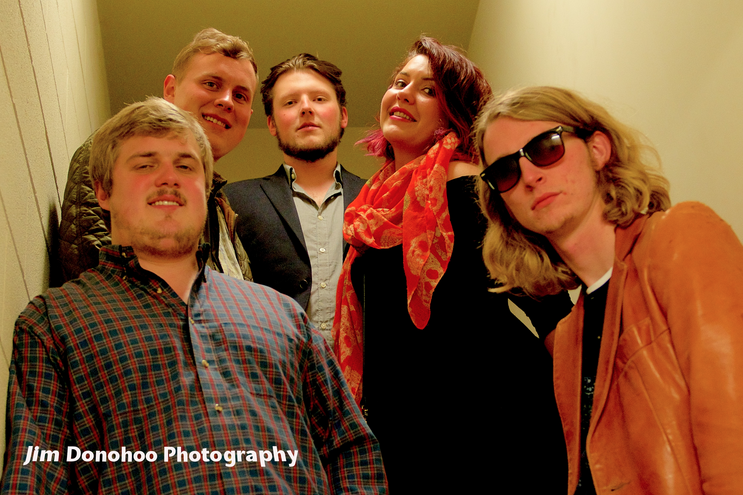 Musicians are as populous as breweries in Asheville, new bands and IPA's popping up virtually every month. However, passion, hard work and a dash of style is what truly sets apart the good from the great, and Andrew Scotchie has talent and style. I had the pleasure of sitting down with the rocker to talk about the origin of the band, a new album and what the future holds.

Lauryn Higgins: For readers completely new to your music, can you describe your style and tell us a little about the band?

Andrew Scotchie: We're high energy funk and rock ‘n roll, just come to a live show and you will know we are definitley high energy. Our band is compromised of Eliza Hill on percussion, her brother Asher Hill, on bass and Moog board, Alex Bradley on trumpet and Kyle Snuffer on trombone.

Lauryn: The name of the band is so specific. How did you come up with it?

Andrew: It was late 2011 and at the time we rehearsed off Riverside Drive. It would get so hot during the day that we would run down to the river and jump in to cool off. So our drummer at the time said, “You guys should call yourselves the River Rats.” And it stuck. Now we go by Andrew Scotchie and The River Rats as a way to brand ourselves specifically.

Lauryn: You started Asheville Barnaroo in your mom’s backyard with high school garage bands and now have expanded to Franny’s Farm in Leicester with headliners and a bike race. How did this evolve?

Andrew: Asheville Barnaroo began because at the time we were not old enough to play anywhere. Venues and bars in Asheville had an age restriction, so a lot of my friends just wanted to play their music on a stage. So we set up some amps and laid some plywood in my mom’s barn and invited all our friends to come play. The barn actually smelled pretty bad from the horses, but then again so did all the sweaty teenagers, so no one noticed. Soon all our friends began to take notice and their parents started coming to the shows, and then their parents friends started coming. Soon we outgrew the barn and our second year of doing it we actually got a noise violation. We then knew we had to move. Over the years I had created a great relationship with Frances Tacy of Franny’s Farm in Leicester. So, she invited us to host the event there and our first year we had Shonna Tucker headline the event and haven’t looked back since.

Lauryn: A song off your first album was just used in a GAC TV (Great American Country) commercial. How did that come about?

Andrew: A friend of mine who has connections with the station really loved our sound and approached us and asked if we would allow one of our songs to be used. The commercial is a rebranding campaign, aimed to advertise the network as well as their variety of shows. The song they used was “I’ve Got the Keys.” I’ve always loved that song and was pleasantly surprised that they choose it. But that’s what is so great about an album. That once you record something, it’s around forever, which is something special.

Lauryn: You just finished recording your second album and are now prepping for the release? How do you feel the band has evolved musically since the first album?

Andrew: Making an album is always a time consuming and intense creative process. And after you release your first album, there’s always added pressure to make the second album even better. The band as a whole has grown as a cohesive unit over the years and musically we’ve fine-tuned our strengths and weaknesses. It’s been so fun getting to work with this group of people who are not only amazing musicians but are also my really good friends.

Lauryn: The second album is scheduled to release April 17, what can you tell us about it?

Andrew: The second album was completely recorded mixed and mastered at the Eagle Room in Weaverville. I wanted to keep it 100% local and really ensure we were being authentic with our process. Matt Williams, who owns the studio is brilliant. He made everything sound so tangible, like you could reach out and touch each instrument and really hear the songs for what they were. We also did some tracking at Sound Temple Studios with Robert George in early 2014 to begin the process. But both guys are great, and I think so highly of them. The new album is called We All Stay Hungry and there are seven studio tracks and one live recording we did.

Lauryn: I love the album title, what was the inspiration behind the name?

Andrew: One of the songs off the album is called “We All Stay Hungry,” so we didn’t have to go far for a name. However, it also was a great representation of the Asheville music scene. We really respect and admire the musicians in this town and we understand how hard it is to make it. Someone once said to me “If you want to make it, you have to stay hungry.” That really resonated with me and it was such a true testament to how much work we have to put in to this to make it worthwhile. Haters are always saying, “There’s no way you’ll make enough money, you’ll starve.” And in a sense this our defiant way of saying we are going to make it.

Lauryn: Your first single is dropping April 1. You’re doing something you’ve never done before. Can you tell us what that is?

Andrew: Our first single, called, “The Best in You,” will drop April 1 and we have for the first time a guest singing on the track. Asheville’s LYRIC will be adding her sweet yet soulful voice to the song. It’s something I’m really excited about it and again is a testament to how cohesive the Asheville music scene. Working with other artists in the area is what keeps us going.

Andrew Scotchie & The River Rats will have their CD release show April 17 at Highland Brewing Company from 7-9 pm. Guests will include: Noah Larssen, Jack Mascari and more from the vibrant local Asheville scene. There will be a meet and greet and CD signing following the show.