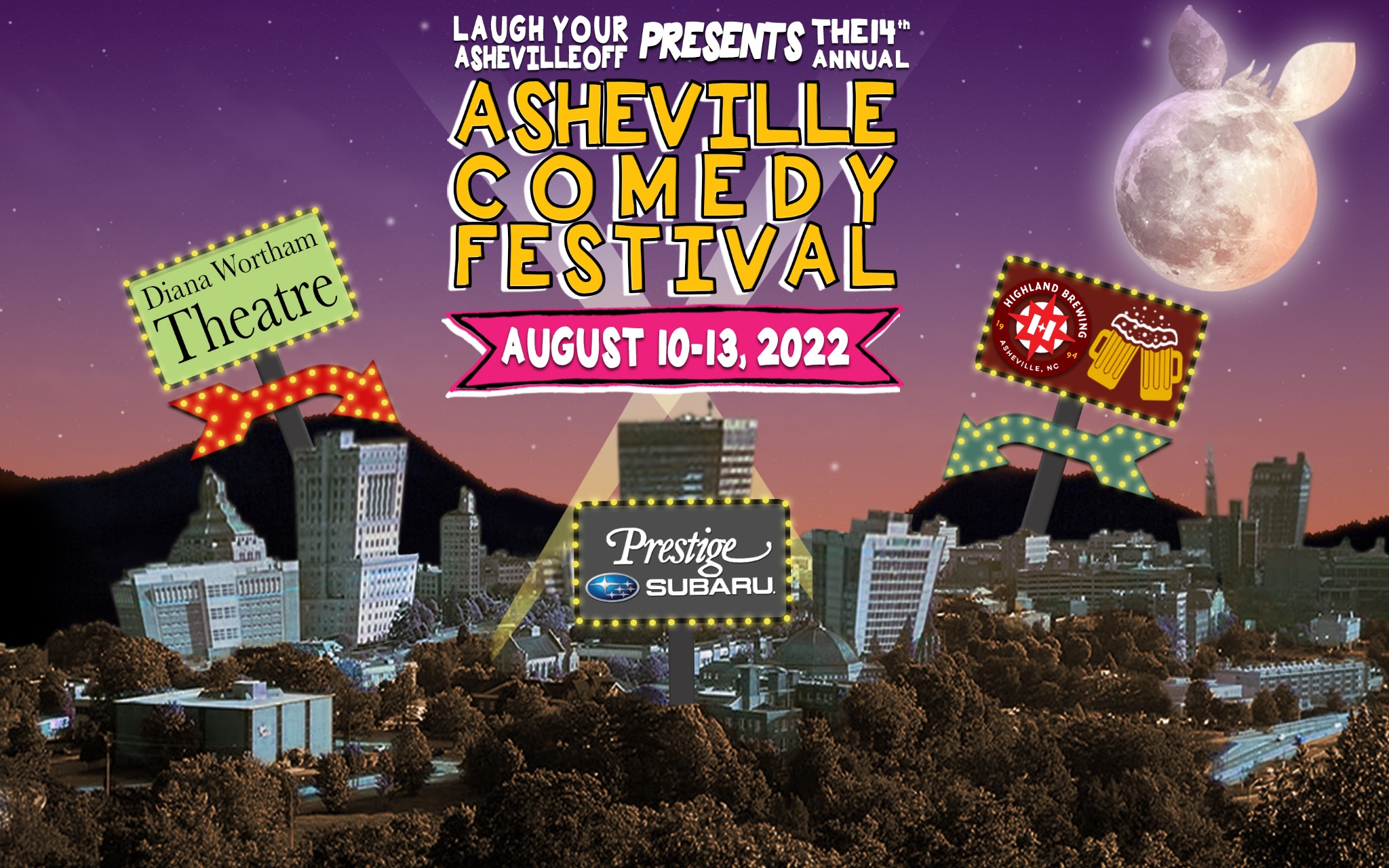 Presented by Laugh Your Asheville Off, the largest comedy festival in the Southeast comes roaring back to Asheville August 10-13, 2022, with all the guffawing, snorting, and deep belly-aching laughter audiences have come to expect. Now in its 14th season (and after a two-year hiatus), Asheville Comedy Festival presents four nights of shows at Highland Brewing Company and downtown at Wortham Center for the Performing Arts. The festival will showcase an eclectic mix of more than 50 comedians from around the globe (that’s whittled down from hundreds of submissions), inclusive of all genders, races, and styles. A full list of the 2022 comics can be found at AshevilleComedyFestival.com, with the lineup to be announced in the coming weeks.

While headliners are purposefully absent and comic names lesser-known, Asheville Comedy Festival has grown into one of the nation’s most prestigious events in the comic industry. That’s because of the opportunities it creates for up-and-coming comedians. Because of its reputation for featuring top-notch, under-the-radar talents, the festival has attracted major TV network executives, casting agents, talent bookers, and club owners. The shows never overlap, allowing an equal opportunity for comics’ performances to be seen by all attendees. That focus on the talent has led many festival alums such as Tom Segura and Kyle Kinane to great success, including in roles acting or writing for popular TV series and movies. For attendees, Asheville Comedy Festival is an opportunity to die laughing while possibly watching some of the next big names in comedy.

“It’s a comic-friendly festival,” says festival Producer & Executive Director Charlie Gerencer. “Everything we do is dictated by funny and geared toward setting the comics up for success. We put a high value on production detail, and strive for a higher caliber of talent than you’d expect from a typical comedy show.”

New this year, comedy exec Jeff Tully is hosting a daytime Green-screen Joke Show, open to any and all comics. It’s an opportunity for stand-up comedians to hone their skills writing jokes and auditioning content on camera, says Gerencer. And it’s an especially unique opportunity for professional and aspiring Asheville-area comics.

Wednesday night Kick-off Party comedy show tickets are $25; all shows at Wortham Center are $34. The VIP Cosmo Pass is available for $100, and grants access to all shows ($127 value). Cosmo Passes are limited to 50 total. Tickets go on sale June 20 and are available at AshevilleComedyFestival.com. Be advised: tickets almost always sell out in advance, with VIP tickets selling out within days.

Asheville Comedy Festival was co-founded in 2007 by comedy business veteran Charlie Gerencer as Laugh Your Asheville Off and rebranded in 2019. The Los Angeles-based event producer has produced comedy around the world and in some of the country’s most distinguished venues. He has been a comedy club owner, live event producer, and television producer. Through comedy television development deals with Lionsgate, Gerencer produced multiple projects including “The Joel McHale Show with Joel McHale,” “Norm Macdonald Has a Show” for Netflix, “Kevin Hart: Lyft Legend” and many more. Currently, he is the Executive Producer and showrunner for “DL Hughley Uncut” featured on Kevin Hart’s LOL network and is also an active comedy development executive with several comedy streaming channels. He is the owner and Executive Director of Asheville Comedy Festival