"When you see bum trash and tags everywhere, that’s where you sit and wait for the train”: a look inside the eternal American train kids culture

"When you see bum trash and tags everywhere, that’s where you sit and wait for the train”: a look inside the eternal American train kids culture 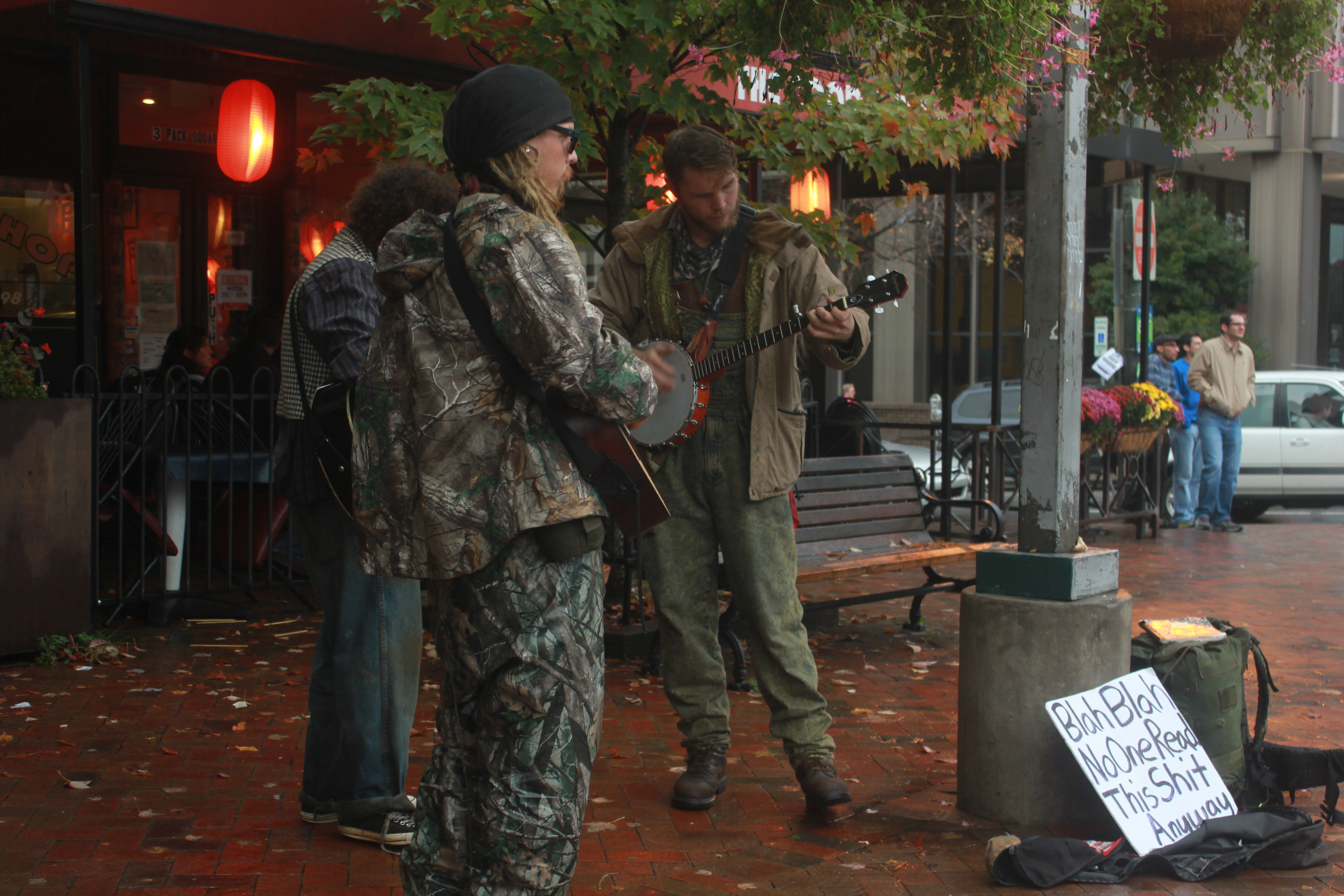 Many train kids are usually buskers. Here, a group of wanderers play outside the Bomba coffee shop, a central point in Asheville.

**This article was co-authored by Larisa Karr and Roan Farb. The authors would like to thank June Bunch for her contributions to the piece.**

“It was kind of gross, but the craziest thing I had to [do] was use the restroom, number two, so I straddled two cars [trains] and just pulled my pants down and shit.”

Ask somebody who has been riding rails across the country for years about their craziest experience, and answers like these are bound to pop up.

Dalton, originally from Houston, is an experienced train-hopper who has criss-crossed the lower 48 for years. Looked down upon by many in the modern world, train hopping is a culture that still exists, and while it has changed since last century in many aspects, there are still many individuals who consider themselves deep in this culture roving the streets of Asheville.

“Well, I just do networking with a bunch of friends. I know a lot of people in this area, and one of them’s gonna give me a new branch for my mandolin, and the other’s gonna me new strings,” said Crow, a Boston native who has been travelling for 3 years. 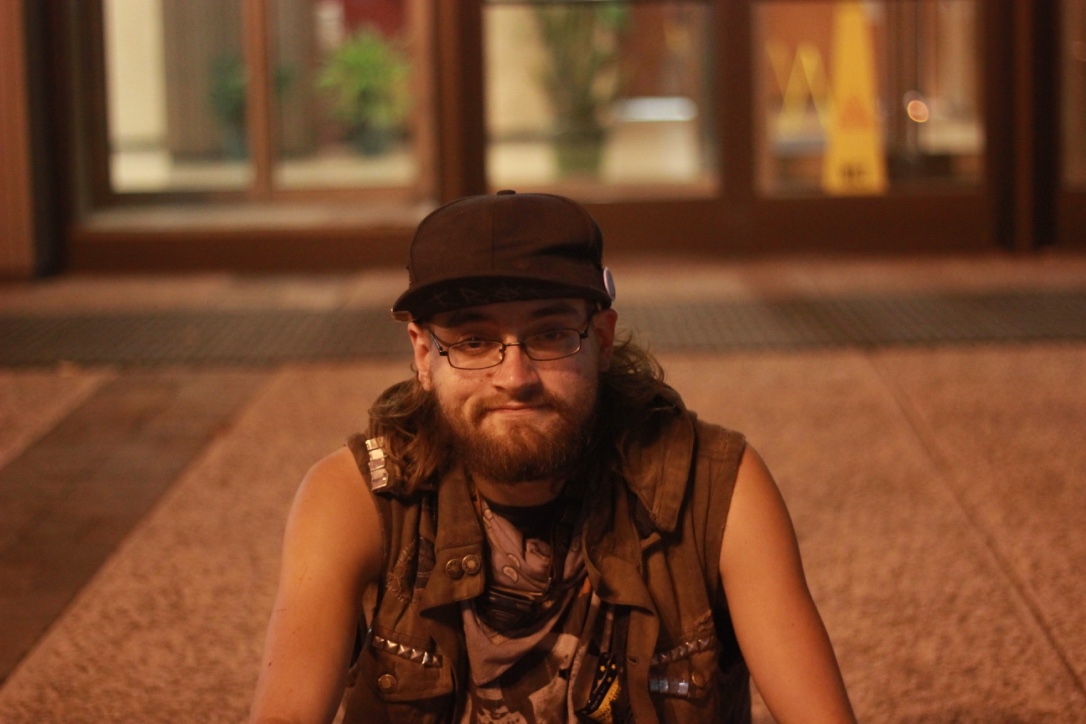 Crow, a Boston native who has been riding the rails for three years, says he doesn't ride trains as much anymore.

Crow cautions, however, that life on the rails is definitely not for the naive, nor the faint of heart.

“I try to keep myself out of those situations. I’ve had to tell kids to kick rocks, to get outta here before, y’know?,” Crow said. “Cause I could tell they were NOT ready to hitchhike or ride trains with me, y’know? We woulda ended up fightin’ and it woulda gotten ugly, especially on a train.”

Aside from those he dubs “old-school cats,” Crow doesn’t ride trains with many people now.

“Some people will steal from ya, beat ya up, some people might even do worse stuff, y’know? Throw ya off a train.”

Communication amongst the train kids is predicated on, and rooted in, trusting your gut. Some don’t even need to use words in order to read each other.

“Yeah. We all take care of each other and you know, we all have instincts and sometimes we speak to each other with our minds because we can sense there are other train hoppers who are, like, some really bad people, who will just kill you for no reason,” Dalton said. “So we have to watch each other’s backs, and stuff like that.”

Robbie, a drifter from Memphis who has been travelling with Dalton for some time, went into further detail about the need to exercise protection.

“Some of us carry around smileys and weapons, whatever you got, you know? I personally haven’t, which is probably a bad idea,” he said, laughing. “I don’t know. I should probably get on that.”

Spots frequented by train kids are often stamped with markers from previous travellers with the intent of helping others on their forward sojourns.

“When you’re hitchhiking, on the interstate, there’s a sign that says how long you’ve been there, so to alert people if it’s a shitty exit so they can walk by,” says Alanna, a traveller from Asheville who currently prefers the name “Pez.”

She went into detail about one particular incident in Fort Worth, Texas.

“In the Fort Worth train hop-out, there's a bunch of notes written all around the yard,” she said. “They were building other train tracks for years, and they finally switched stuff and they fucked everybody up because there were police there.”

It’s common practice for train kids to often band together, forming squat houses throughout the country.

“I even got friends outside of New Orleans, so we would’ve had housing to stay with, but I like squatting there and really the aspect of community that we have. You know, there’s a lot of kids who get really violent. There’s a lot of people who just have this pretentious little grudge,” says Dalton. “We set up our own houses in abandoned rooms and shit and we get furniture given to us from the neighbors.”

According to Robbie, New Orleans serves as a mecca for travelling kids, particularly on Halloween and Mardi Gras. In fact, Crow and Robbie specifically cite the Louisiana city as one of their most unforgettable stops.

“Aw man, it was like paradise and hell, all wrapped in one,” Robbie says.

“Yeah, the Big Easy,” Robbie says, with a similar sense of remembrance in his voice.

“I mean, it’s a crazy town,” says Crow after answering that it’s also the craziest place he’s ever been to. “There’s alotta alcohol. People are drunk in the middle of the street, it’s, it’s amazing and plain crazy at the same time.”

One of the most rewarding aspects of being a traveller, drifting to new places, is meeting up with old friends in cities thousands of miles away from each other.

“We all know our friends are going to be there and we haven’t seen anybody in a long time and we want to see them and they’ll more than likely be in Norly for Halloween or New Year's or whatever,” Robbie says.

Dalton, too, expresses the joy that ensues when drifters cross paths once again. 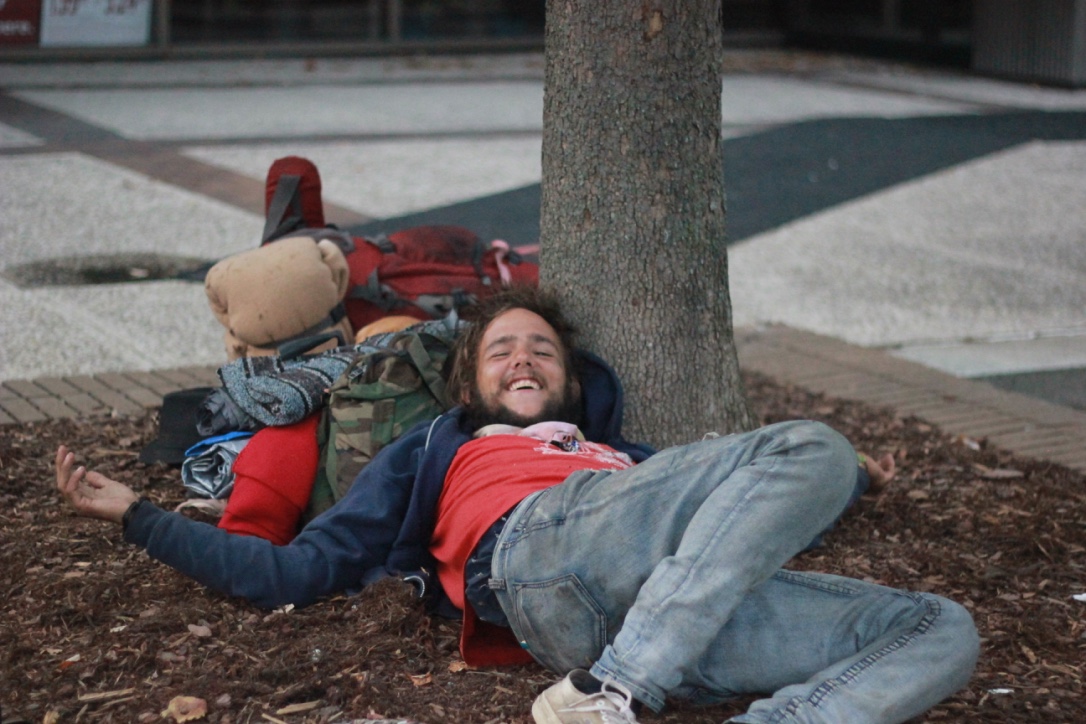 A rail-rider who did not wish to be interviewed or identified did, however, want to be photographed.

Initially when interviewing Crow, Alanna, Dalton and Robbie, it became apparent that there is a common language, a language that train kids pick up on the road and constantly employ.

Road-dogging is one such word.

“When you’re on the road with somebody, you can only spend so much time with them before the tiniest thing they do just makes you snap. It’s like a relationship,” says Crow. “If you guys are road-doggin’ it, you’re together ALL the time.”

“Yeah, it’s very much what made me so content with this lifestyle. You know the second I got out, you run into a few kids, and they can tell you’re in the same situation, and they’ll just [be] like, this is my road dog,” Robbie says. “We just become road dogs and just hit the road, you know? Busk, like we do now.”

Another aspect of Train Kids culture is the individual monikers they receive along the way.

Alanna, who used to go by Sky, now goes by Pez because of a particularly unusual incident.

“I had a bunch of Pez and I put a bunch of Xanax in the Pez dispenser,” Alanna says.

Crow, whose full name is Andy Crow, prefers to go by and is recognized by his surname, while Robbie and Dalton both don’t really care about their street names anymore.

“Well, uh, I’ve got a million: Hippie-Jedi, Mama Bear, whatever. I hate ‘em. So I try not to have those names,” Robbie says. “But, you know, traveller kids see me and they’re like, ‘Hippie-Jedi! What’s up, man?’”

Crow doesn’t ride trains as much anymore but still ascribes to the unpredictable lifestyle of a traveller.

“This one time I caught a ride outta New Orleans. This [was] a guy I knew and he just saw me on the side of a road and he’s like, ‘Hey man, where you tryna’ go?’ and I told him Asheville. This was like, a year-and-a-half ago. I come here pretty often often and the guy had just fuckin’ stolen a semi-truck and was just, like, drivin’ it around, man.”

“We drove mostly back roads, but, like, this dude was crazy, man. Somebody cut him off, and he jumped out of the truck with a baseball bat.”

Dalton and Robbie cite riding suicide as one of the scariest but most rewarding risks of a life on the rails. ‘Suicide’ is when a person sits down on the pieces of metal that connect the base of two train cars. It is not, however, a complete platform to sit down on, and riders have to be careful about how they position their body, as they are completely exposed to the elements.

“It’s like maybe having a little platform, and if you fall asleep, the tracks can bump and you’d fall and then it’s over,” Robbie says.

For now, Crow, Robbie, Dalton, and Alanna have found brief sanctuary in Asheville.

“Yeah, I don’t like to stay in towns too long because especially if they’re not welcoming, it’s just like, get out,” Dalton said. “As a musician, if I stay in a town long enough to play one or two good shows, then they always want me to come back. If I stay there long enough, I’ll just become ‘Oh, this guy again.’”

One place in particular that has achieved a notably romantic level of remembrance is the Icehouse in West Asheville.

Alanna, who was remained relatively blank throughout the interview, springs to life upon recollection of this notorious building.

“It was by the big warehouse by the bridge over the river. There used to be that huge warehouse that was like three/four stories tall and it had all that graffiti and it used to be the hop- off for getting off the train,” she says. “So when I was 14, I think that’s probably what made me want to come check it out, because I’d always wanted to do it anyways.”

Even though the pre-World-War II building was demolished by the City Council, train kids continue to find harbor on the streets of Asheville.

Walk around downtown on a crisp fall day, and you will notice them lingering with their dogs. On the sidewalks on Lexington, on benches close to the Vance Monument, on Eagle Street, doing what they do best, quietly passing by inside their coded world.

“You know when you see bum trash and tags everywhere,” Alanna says. “That’s where you sit and wait for the train.” 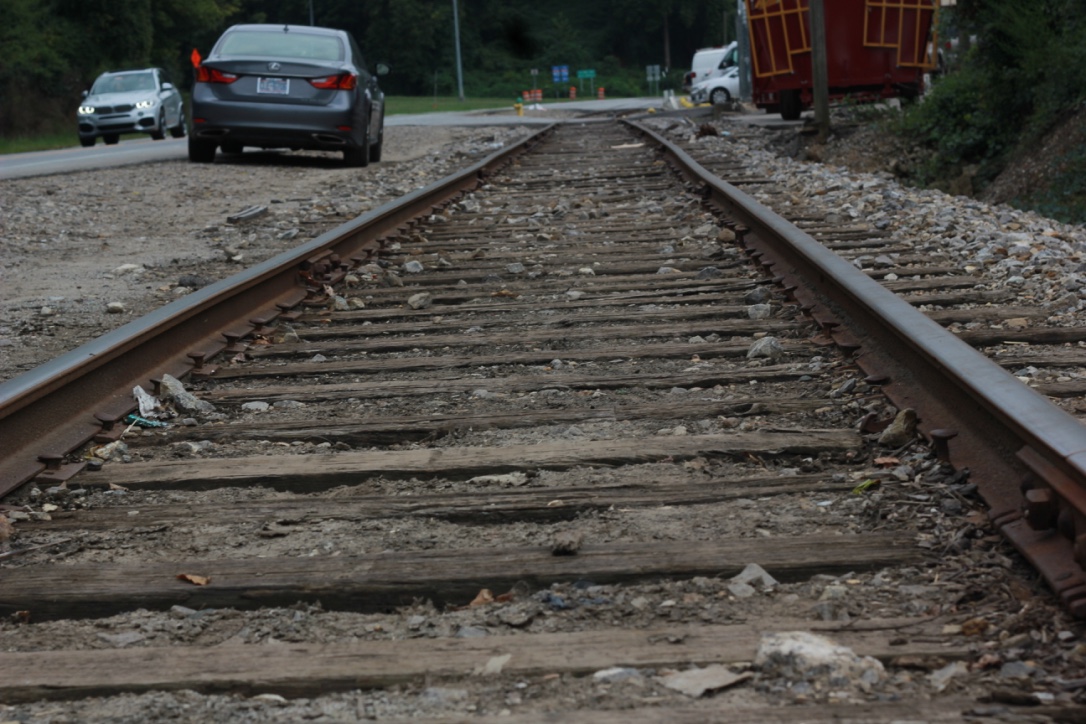 The rails are an endless journey for some, a stopping point, an ending point, or a point of no return.