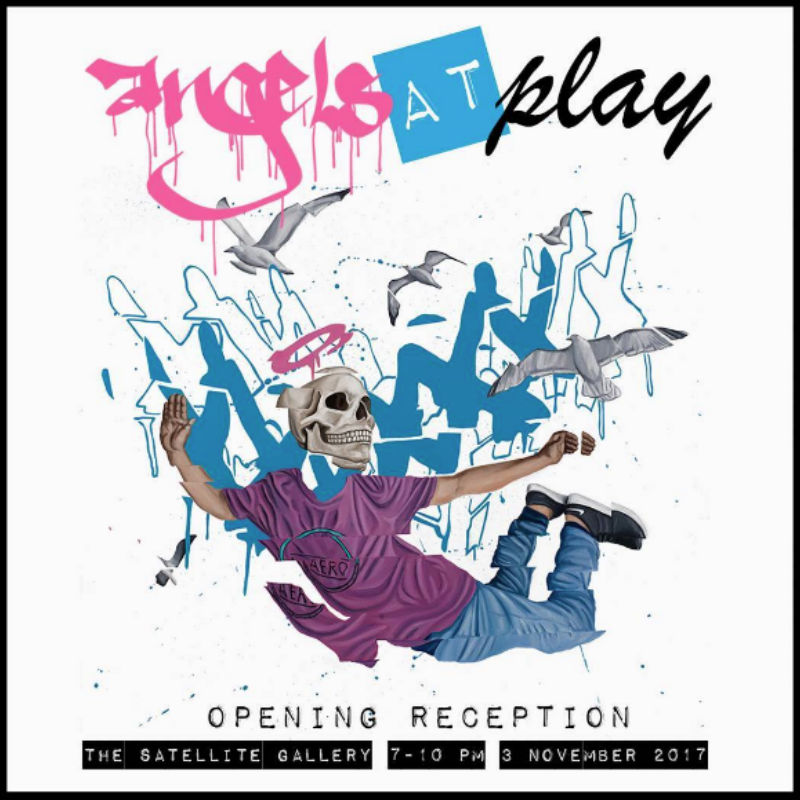 Growing up in Abingdon, Virginia, Tyler Whitlock felt an early connection to making art. But he didn't become serious until he moved to Hong Kong, where he lived for seven years and where he was exposed to the lively, provocative culture of street art. "That urban environment where you see graffiti and street art started to infuence the aesthetic I wanted to work towards," he says. The artist, who now lives in Asheville, has his debut Asheville show, "Angels at Play," this Friday at the Satellite Gallery (55 Broadway St.).

"When I first moved here was looking for opportunities to show," says Whitlock, who has had exhibitions in Hong Kong, New York City, and other large urban areas. "I know Asheville has more of an arts and crafts scene, and there is some really cool stuff here, but my work doesn’t really fit that mode. But then I came across Satellite and started talking to Bill."

Bill Thompson, founder of Satellite, is known in the community for featuring new artists who might not fit the traditional aesthetic of Asheville's art scene. The shows at Satellite are consistently cutting edge, and Whitlock's is no exception. He works in a variety of mediums, including acrylic, spray paint, and oil paint, to produce works that pull from graffiti, digital art, and the Old Masters. Works also feature an element of "glitch" that Whitlock creates in paint. 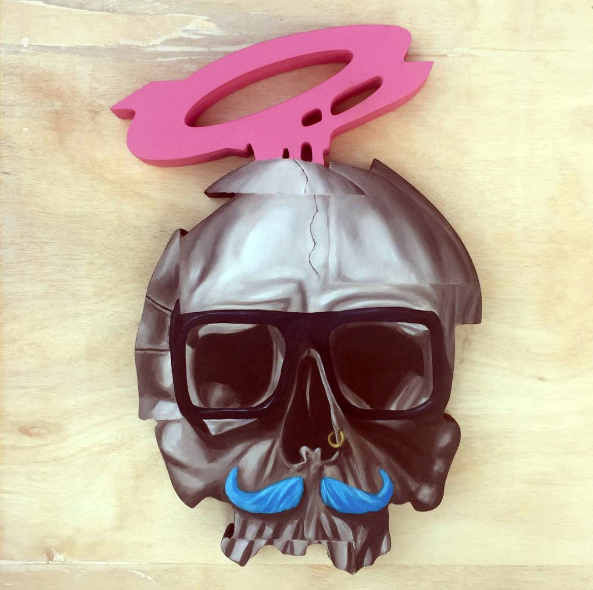 "I really love digital art and I love the glitch process," he says, "and I like bringing that aesthetic into paintings. I like to challenge perspectives on a visual level. A lot of people get really close to my paintings and try to figure out how they're pieced together and whether they're cut out and pasted or actually painted, and I love how that aesthetic draws people in and gets them thinking deeper about the meaning behind different elements. I sometimes call my style 'glitch collage.'"

Beyond his aesthetic, Whitlock has also themed the show around rethinking iconography, specifically the angel. This show features skulls, a whole lot of them, that function as the "angels" mentioned in the exhibition title. Whitlock drew heavily on studies of anatomy for his figures, which seem to be having fun in spite of the fact that they are, well, dead.

"The show's title, 'Angels at Play,' is about me questioning some of the traditional depictions around things like death, loss, and spirituality. I wanted to take those traditional depictions and turn them on their head a bit," he says. "Skulls are often represented as morbid, evil, and dark. And angels are typically represented as these beings who are all in white with golden halos. I wanted to give that an interesting twist by mixing the two, using something that's usually seen as darker, like a skull, and and adding a halo and bright colors."

Irreverence when it comes to long-standing tradition is something Whitlock can pull from both the street art scene and the contemporary art scene, and he's interested in how the two can inform one another as lines between them continue to be blurred.

"I think that street art's aesthetic in the gallery is a great thing," he says. "It's been going on for a long time, and I don’t see any problem from moving from the street into the gallery. There are a lot of people exposed to these works in a gallery who might not be in the street. It's a good thing to bridge that gap."

"It's that question of who defines fine art," notes Thompson. "As a gallery we’ve been helping to blur the line for quite some time. The artists at the top of the scene right now were doing street art or were live painting at parties in the late 90s, and now they’re receiving big money for their work, so that’s interesting. They have shows booked for years."

The show opening, from 7-10 pm on Friday, November 3, will be a great way to wind down your Halloween and Day of the Dead celebrations. "We hope everyone takes the time and comes to view an artist they haven’t seen before," says Thompson. "Asheville tends not to do that and that’s the struggle. People should jump out, because no one is doing this."

Whitlock concurs. "My objective with art is to challenge people’s perspectives," he says. "This show does that on a visual level, with glitching, and also on an emotional level because of the subject matter I address." 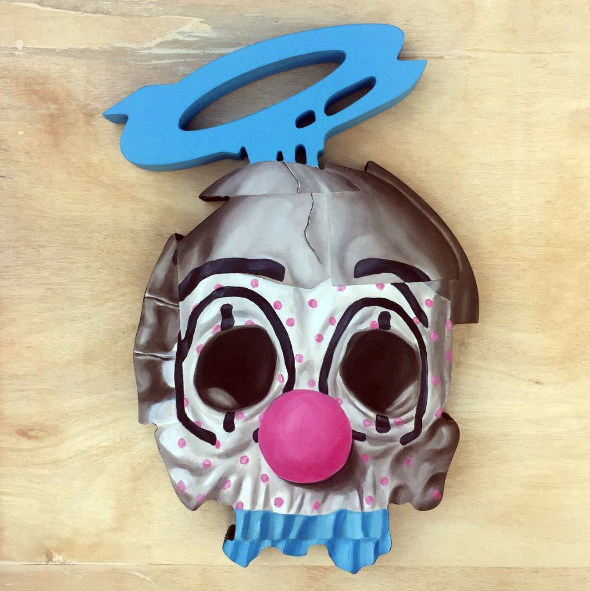 The show will include 20 pieces from Whitlock, plus several prints.