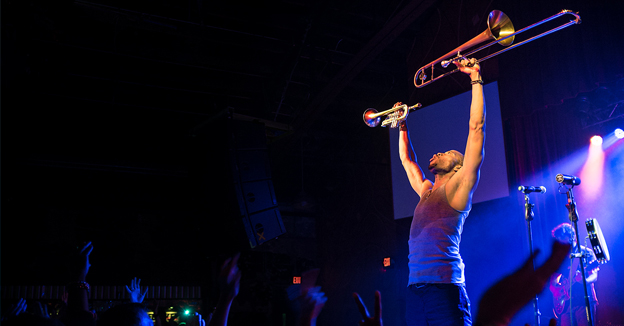 Three New Orleans acts came to Asheville recently, with more to come before September’s over.

Dumpstaphunk, fronted by Ian and Ivan Neville, played a rousing set at the Orange Peel, but got off to a rocky start. (When your tech is on stage as much as the band, that’s a problem.) But once they got things working, it kicked into full gear with Tony Hall and Nick Daniels III pounding out dueling bass lines that shook the venue.

However the surprise of the night was the opening act, the AJ Ghent Band. The band played a set of crisp soul, blues, and rock, fronted by fingerstyle slide guitarist and singer AJ Ghent. Dressed to the nines, he sang and played effortlessly on his Epiphone and a beautiful custom 33:3 8-string Tele guitar (guitar fetishists can see a photo set of the making of that guitar here). His style mixed an old-school feel for songwriting with a modern lead playing that at no time felt incongruent or forced. I only wish more people had shown up to see him.

[Note to young Asheville: Why?! Why do you spend your hard-earned cash on a show, and then arrive only for the main attraction? When doing so means you end up missing surprising acts like the AJ Ghent Band, it borders on criminal negligence of your well-being.]

The highlight of my week was the Trombone Shorty concert on Tuesday at the OP. I had seen his cameos on Treme (here’s the band playing on the season 4 premiere), but at the Orange Peel they displayed a level of energy not captured in those performances. The group was really fired up, in no small part due to the great reception that he received from the packed crowd. Sister Sparrow & The Dirty Birds opened (they’re going to be back, at New Mountain, in November).

The third N.O. band, 101 Runners, came to New Mountain for the after party of the first day of the Goombay Festival. The first set had them all in street clothes, but for the second set Juan Pardo and Isaac Kinchen of the Golden Comanches came out in their full Mardi Gras regalia. Youtube user “I Am Asheville” recorded much of both sets. You can see two clips below.

You can see more photos from the Dumpstaphunk/AJ Ghent Band show here, and more from the Trombone Shorty/Sister Sparrow show here.

And there's even more N.O. music coming up this month!