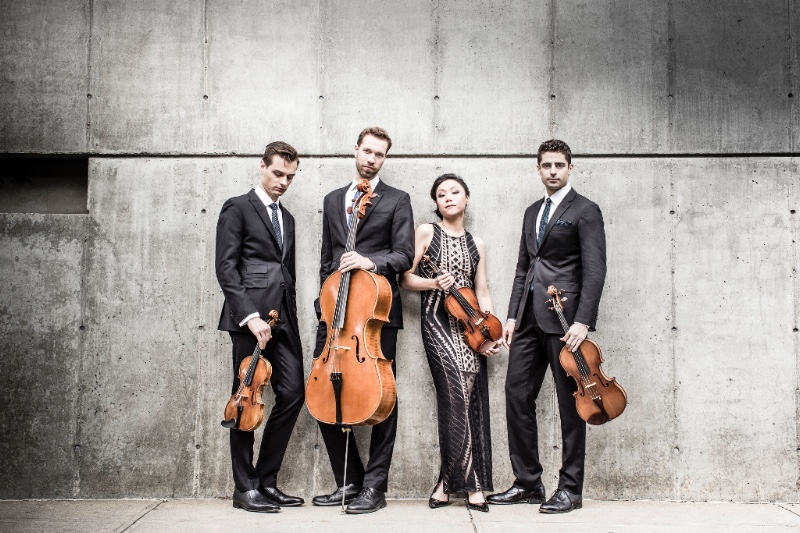 There's a special program coming up on Feb. 23 at the Black Mountain College Museum + Arts Center. Check it out.

Join us as the Tesla Quartet performs a rarely heard composition by Hugo Kaulder, originally performed at Black Mountain College’s Summer Institute of 1945. Praised for their “superb capacity to find the inner heart of everything they play, regardless of era, style, or technical demand” (The International Review of Music), the Tesla Quartet brings refinement and prowess to both new and established repertoire. The group was formed at The Juilliard School in 2008 and includes Ross Snyder (violin), Michelle Lie (violin), Edwin Kaplan (viola), and Serafim Smigelskiy (cello). This special program is presented in collaboration with Hugo Kauder Society. Kauder was a composer-in-residence at BMC in the summer of 1945. The program will include Kauder’s String Quartet 4, a piece performed at BMC in 1945, as well as Bartok’s String Quartet 3 and transcriptions of works by Gesualdo and Ravel by Tesla violinist Ross Snyder.

In the 1930's and 40's Black Mountain College was a haven for many European refugee intellectuals and artists displaced by the rise of Nazi Germany. After a fruitful period in Vienna, Hugo Kauder fled Austria for Holland in 1938, then settled in the United States in 1940. He rebuilt his own life with the help of a vital network of refugee musicians, including a core group that made up the Black Mountain College music faculty in the 1940's. Presumably Kauder first met Heinrich Jalowetz in Vienna in the 1920's. Jalowetz was a central figure in Arnold Schoenberg's circle of pupils and colleagues, and he and Kauder shared common ancestral roots. (Jalowetz was also born in Moravia, about 45 miles from Kauder's birthplace, Tobitschau) During his short time in Holland, Kauder befriended musicologist Edward Lowinsky, who wrote an insightful and passionate essay on Kauder's music in 1946.

The Black Mountain College Summer Institutes in art and music began in 1944. The Second Music Institute in 1945 was devoted to the study of polyphony and ensemble playing. According to the college's own press release, "The Gordon String Quartet performed the Quartets No. 4 and No. 7 of Hugo Kauder, who was invited to the Music Institute as resident composer, and as a representative of a contemporary polyphonic style. Among the works of Hugo Kauder performed during the Music Institute were a sonata for violin and piano, songs, choruses, a horn sonata, and a trio for oboe, horn, and piano." Other participants and performers included Erwin Bodky (harpsichord/piano), Emanuel Zeitlin (violin), Josef Marx (oboe), Eva Heinitz (viola da gamba/cello), Gertrude Straus (violin), and Willem Valkenier (horn). Many of Kauder's works for horn were inspired by and dedicated to Valkenier. They had been close friends since meeting and working together in Vienna before 1920.

The Tesla Quartet’s goal is to reconnect and establish Kauder's legacy as part of the ongoing rediscovery of the artists and work associated with the legendary Black Mountain College.

About BMCM+AC
Black Mountain College Museum + Arts Center preserves and continues the legacy of educational and artistic innovation of Black Mountain College. We achieve our mission through collection, conservation, and educational activities including exhibitions, publications, and public programs. The museum is open Monday and Wednesday through Saturday, 11:00–5:00 p.m. Admission is by donation. www.blackmountaincollege.org.

About Black Mountain College
Legendary even in its own time, Black Mountain College attracted and created maverick spirits, some of whom went on to become well-known and extremely influential individuals in the latter half of the 20th century. A partial list includes Willem and Elaine de Kooning, Robert Rauschenberg, Josef and Anni Albers, Jacob Lawrence, Merce Cunningham, John Cage, Cy Twombly, Kenneth Noland, Susan Weil, Vera B. Williams, Ben Shahn, Ruth Asawa, Franz Kline, Arthur Penn, Buckminster Fuller, M.C. Richards, Francine du Plessix Gray, Charles Olson, Robert Creeley, Dorothea Rockburne and many others who have made an impact on the world in a significant way. Even now, decades after its closing in 1957, the powerful influence of Black Mountain College continues to reverberate.