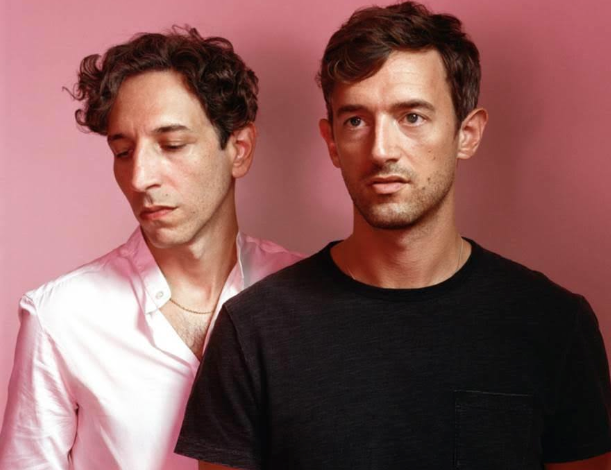 Generating creativity is too tame of a phrase to describe what Brooklyn-based duo Tanlines are up to. Their new album, Highlights (2015, True Panther Sounds) sets a bar for music that is both technically profound and brazenly fun. Eric Emm and Jesse Cohen recorded Highlights after a computer meltdown forced them to rethink their approach to composition and pare down their electronica-infused setup to its powerful roots. The result is phenomenal. It's heartfelt without ever being cynical, nostalgic without pretension, and danceable without cliches. The excitement I feel for this album is only eclipsed by the thrill I get when I realize they're playing in Asheville at our very own Mothlight, which, let's face it, has had some of the best acts in town lately (You guys are on fire!).

If you haven't heard Tanlines yet, you need to listen to them. And then you need to check out their fantastic website, which is a hilarious mock-up of Netflix's website that features the band in starring roles (one example is the “film” Thinking: “In this tale of clairvoyance and love, only one thing is clear.”). Hitting “Play” actually takes you to the song on Spotify. The rest of the site is worth a look, as it features categories like “Movies and TV That You May Not Have Realized Are About Jews,” “Tropical Depression” and “American Actors Doing British Accents” (I know now that the movie Killer Mermaid exists and feel very fulfilled).  All of this sounds like it could shade into pretension, but the lovely thing about Tanlines is that it never does. Instead, it's like stepping into a deep but hilarious conversation between two very close friends as they talk about love, life, and the beautiful gamut of human emotion, and I feel beyond a doubt that they bring this energy to their performances.

The music itself isn't afraid to get messy. It's filled with lush chord progressions laid over energetic beats and brought to completion with Emm's smooth vocals. Songs simultaneously channel tropical landscapes, dark city streets, and 80's clubs filled with neon and glitter. The occasionally dark, melancholy edge brought in by Cohen's guitar adds a rich dimension to the deliciously fizzy pop flavors. Even songs like “Running Still,” at its heart a narrative of love and loss, are impossible not to dance to.

Mas Ysa (composer Thomas Arsenault) opens for Tanlines. While his sound is in the same vein as Tanlines', it's also a unique combination of minimalist beats that evolve into organic crescendos of sound, synth progressions, and Arsenault's own tremulous, expressive voice.

The Mothlight has thrown the gauntlet with their lineup recently. Don't miss one of the most exciting shows to come through Asheville this year.