Street Art, Spiritualized: An Interview with Amanda Giacomini for the Asheville Yoga Festival

Street Art, Spiritualized: An Interview with Amanda Giacomini for the Asheville Yoga Festival

Several years ago, artist and yoga teacher Amanda Giacomini (also the partner of the fabulous MC YOGI), visitied India's Ajanta Caves, a sacred spot that is the site of 29 rock-cut Buddhist Cave monuments. The dry fresco murals depict stories of the Buddha as he gets ready to renounce his worldly life and go out on his spiritual journey. For Giacomini, who has been creating devotional art for many years in tandem with her spiritual and physical yoga practice, inspiration hit. Shortly after her visit, she began the 10,000 Buddhas Project, setting out to paint 10,000 Buddhas as pieces of public mural art around the globe. She recently finished the 10,000th in a project that has taken her from California to Panama, but she's not stopping yet. Tomorrow and Thursday, Giacomini will be painting a wall on the side of Strada and The Social Lounge in Asheville, NC, which she will complete just before the beginning of this year's Asheville Yoga Festival. She and husband MC YOGI will be running workshops and classes through the weekend as part of the festival, and MC YOGI will headline a sold-out festival show on Saturday night.

Giacomini is a powerhouse, and her work is a testament to the wonderful things that can result from aligning your yoga practice with your creativity. She invites people to stop by and say hello as she's painting, ask about the project, and get to know a little more about its history and what she hopes will come from it. She spoke to Asheville Grit about her future plans for 10,000 Buddhas, her inspiration, and her upcoming time in Asheville.

You've technically finished the project, right? You recently completed the 10,000th Buddha! Are you going to keep going?

A lot of people, even as I got closer to finishing, asked me, "What are you going to do when it's done?" But for me there was never a finish line. The number 10,000 has always been a milestone to anchor me deeper in this practice of painting Buddhas, for myself on my spiritual path. And yet, when I made the goal of 10,000, it was a really emotional day for me. I had set out toward this big goal, and it was one I didn't know I'd be able to reach. There was a real sense of satisfaction. I achieved something that before I had thought might be impossible. It's like yoga—through your yoga, things become possible that you wouldn't have believed. But since I hit that milestone, it feels like the project is picking up speed! It's definitely not over. I'm getting more and more requests by the day and I am really excited about seeing it grow from here. 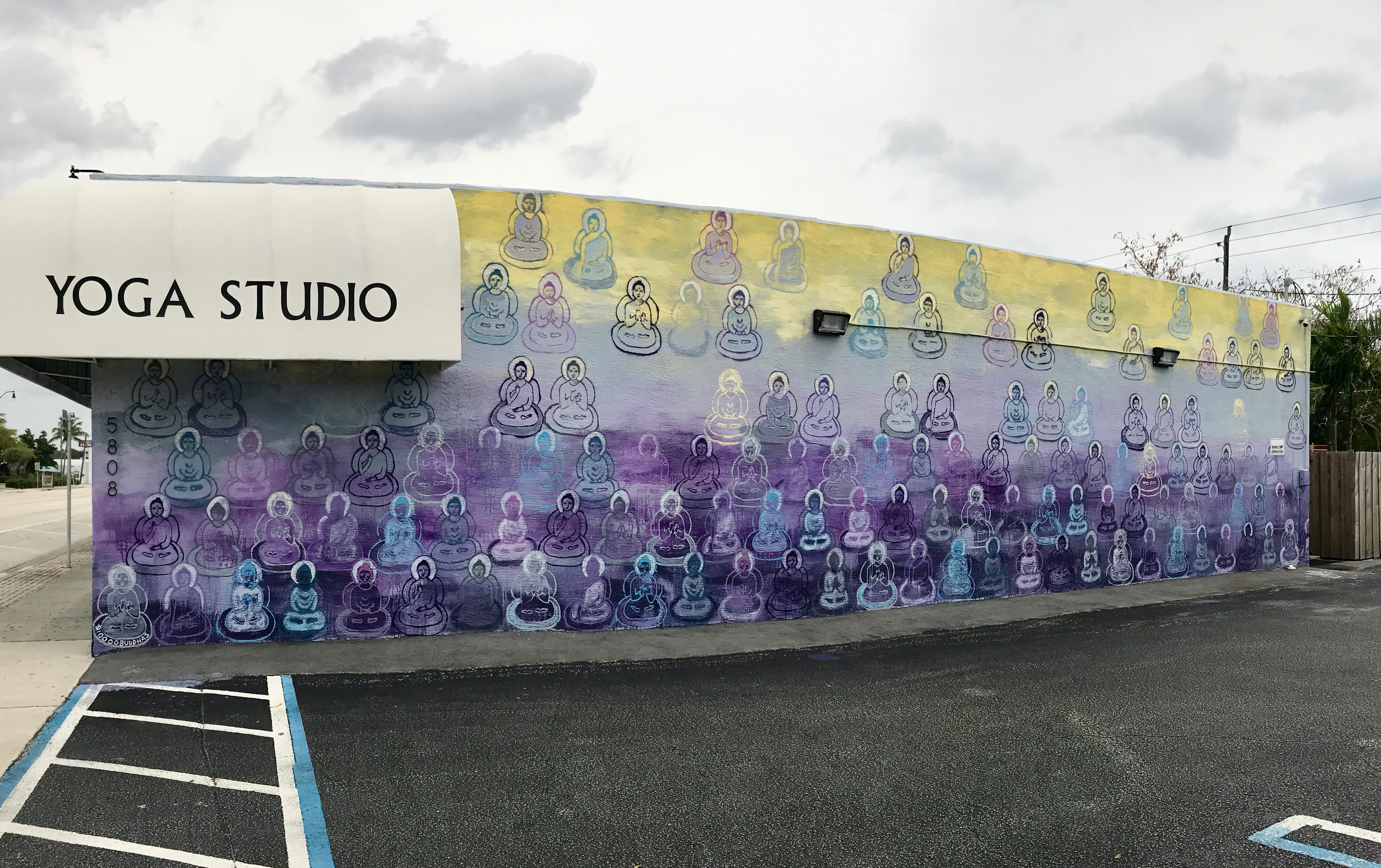 Tell me a little bit about the artistic history you're pulling from here—the tradition of painting many Buddhas.

I first encountered this image on a pilgrimage to the Ajanta caves in India. These are 2,000-year-old Buddhist caves,  and I'd seen pictures and just had to go. So I'm painting my own versions of what I saw. Seeing the paintings in person, and the feelings I got from that—that experience was really deep. I don't think I even realized it at the time. The idea spent several years percolating as I visited caves all over the world, and places in Japan where there are 1,000 Buddhas in some temples. There is a rich artistic tradition of people who paint lots of Buddhas, so it's not unique to me, but I've found a way to bring it to a new audience.

Is there anything you hope people will take away from this project, whether they're familiar with it or just happen to walk by a painting on the street?

MC YOGI and I have been playing with this phrase "Spiritual Graffiti." It's also the title of his memoir, and it ties into what I'm doing now with the project so well! Somebody just told me that they loved coming across my walls, and they said that there are always people just waiting to take pictures in front of them. That's an amazing phenomenon to me, that this work is drawing people in. I often see people doing yoga, or Namaste prayer hands, or pretending to meditate with the Buddhas. And that speaks to an attraction to this work. This feeling that, "Oh, I want to be there with those Buddhas. I want to feel that peace and sense of connection and community."

How has this very public project differed from your usual process of art creation?

It's really invigorating! Before I made public art, I was in my studio by myself. And every two weeks or once a month, people would buy a piece and bring it home. But with public art, you're in a constant feedback loop. And that's exponential with the age of Instagram. I get to be a part of that, of people seeing, sharing, and responding to this work. It gives me a lot of juice for the project. Seeing how people were enjoying it just really motivated me to do more. 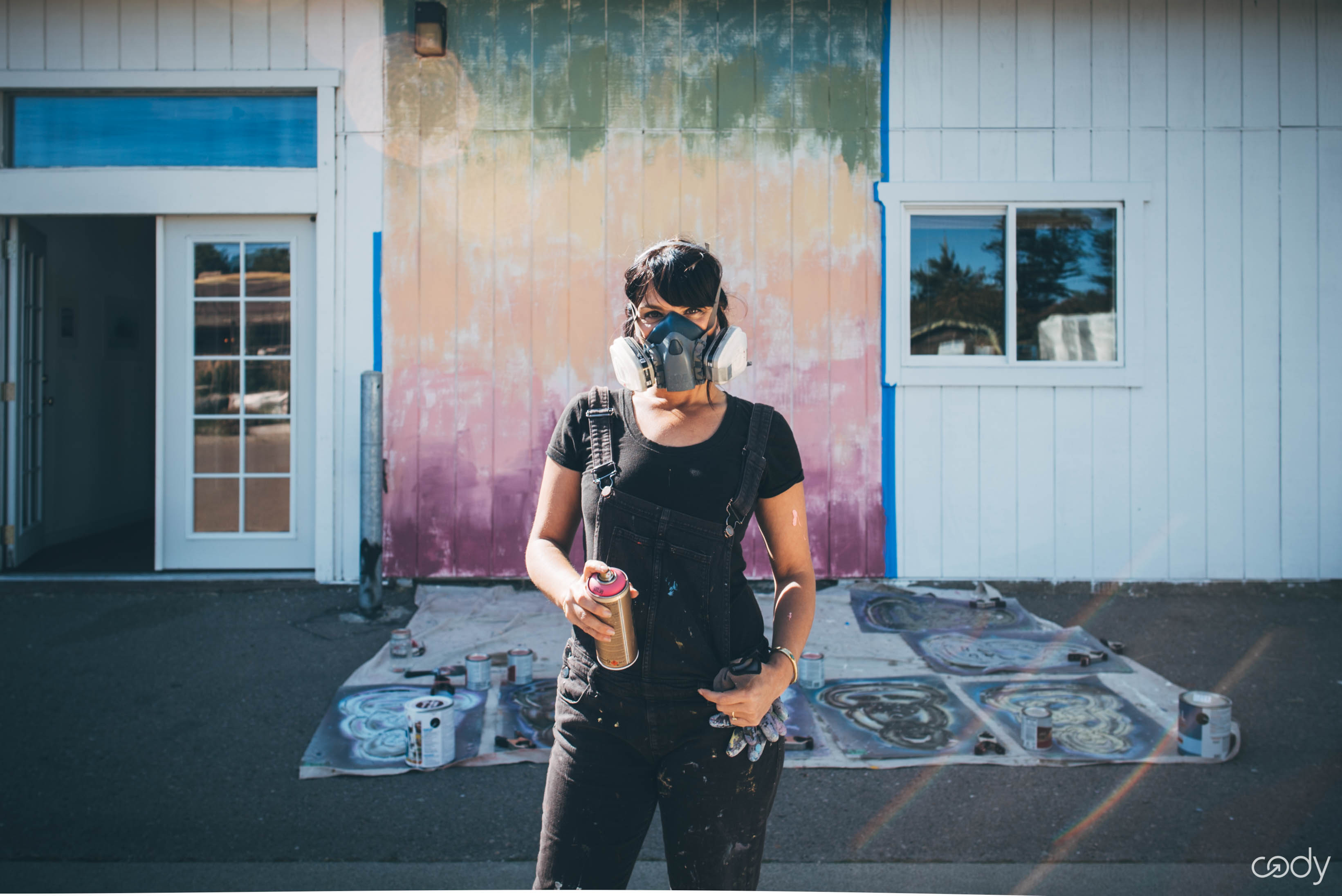 What is your favorite thing about creating devotional art?

Dedicating myself to painting these Buddhas has been a really powerful experience for me, personally. I think that, even if it's subtle, I am connecting to that energy of peacefulness and compassion. It's something that I have felt build up over time, and every once in a while I'll have a moment of exultation. I'll look up at a wall I'm working on and feel that. It's something that is kind of like yoga practice, or meditation. If you're doing yoga daily, every once in a while you're like, "This has had a deep, powerful effect on me and my life!" I'm starting to feel that now with this.

What are you excited about for the Asheville Yoga Festival?

It's been a few years since we've been in Asheville, so it's always fun to come back. It's such a cool city. Every time I come and just walk around town, there's just a lot of life and creativity going on, so it's a great place for us. And I'm excited for the weekend. It's a beautiful festival. Tons of friends will be there, and we're teaching two workshops: One is our "Mantras, Beats, and Meditations" workshop and the other is a discussion of my project and [MC YOGI's] book, and about our pathways of merging art and yoga and music and yoga. We think it will just be really fun to connect to the community.

And I'm excited to paint a mural in Asheville! I'm super grateful for the support I've gotten from Strada Restaurant, which offered up the wall. And Amanda [Hale], who runs festival, has done so much work on the ground to help. There are a lot of logistics to organize when you're doing a mural! So it's been super; it's been great. I'll be painting before the festival actually starts—Tuesday, Wednesday, and Thursday, I hope. Depending on the heat I may work in the morning and then come back and paint in the evening.

How does creativity and art making inform your own yoga practice and teaching?

It's funny. Whenever I'm practicing yoga, I'm thinking about making art. And whenever I'm painting Buddhas, I'm thinking about my spiritual practice. So when I practice yoga, it quiets my mind and I make space for new ideas and inspiration with the project. And then the painting is really meditative as well. Often I'll listen to Buddhist lectures or books on tape, and my mind has time to really grapple with some of these philosophies and explore them a lot. They really go hand in hand for me right now.

What's firing you up in your yoga practice and your art right now, from poses to inspiring music or texts?

The funny thing is that with everything ramping up with the project, I'm painting so much that I'm having repetitive stress in my shoulder and wrist. So I'm actually using yoga therapeutically to help me stretch out and save my body. I'm loving pigeon pose, shoulder stretches, gomukhasana. I have to make sure I'm taking care of myself—it's a lot of labor! So I'm super grateful to my yoga practice. I'm really loving yin yoga right now, too. I'll paint a mural and then at the end of the day I'll stretch out and release the tight spots.

I've been listening to this beautiful talk by Thich Nhat Hanh, "Happiness, Love, and Liberation." I've been super inspired listening to that. He talks a lot about suffering. If we welcome our suffering, then we know how to welcome and handle our joy, and if we avoid our suffering, then we are blocked to joy as well. That's a beautiful concept. A lot of the Buddhist practices are about being able to sit with discomfort or sadness. Not to push it away, but just be compassionate. When we do that, we transform it.

Amanda Giacomini will be painting at Strada and The Social Lounge through Thursday. She'll teach two workshops at the Yoga Festival this weekend.

There are still tickets available for the Asheville Yoga Festival—grab them now. 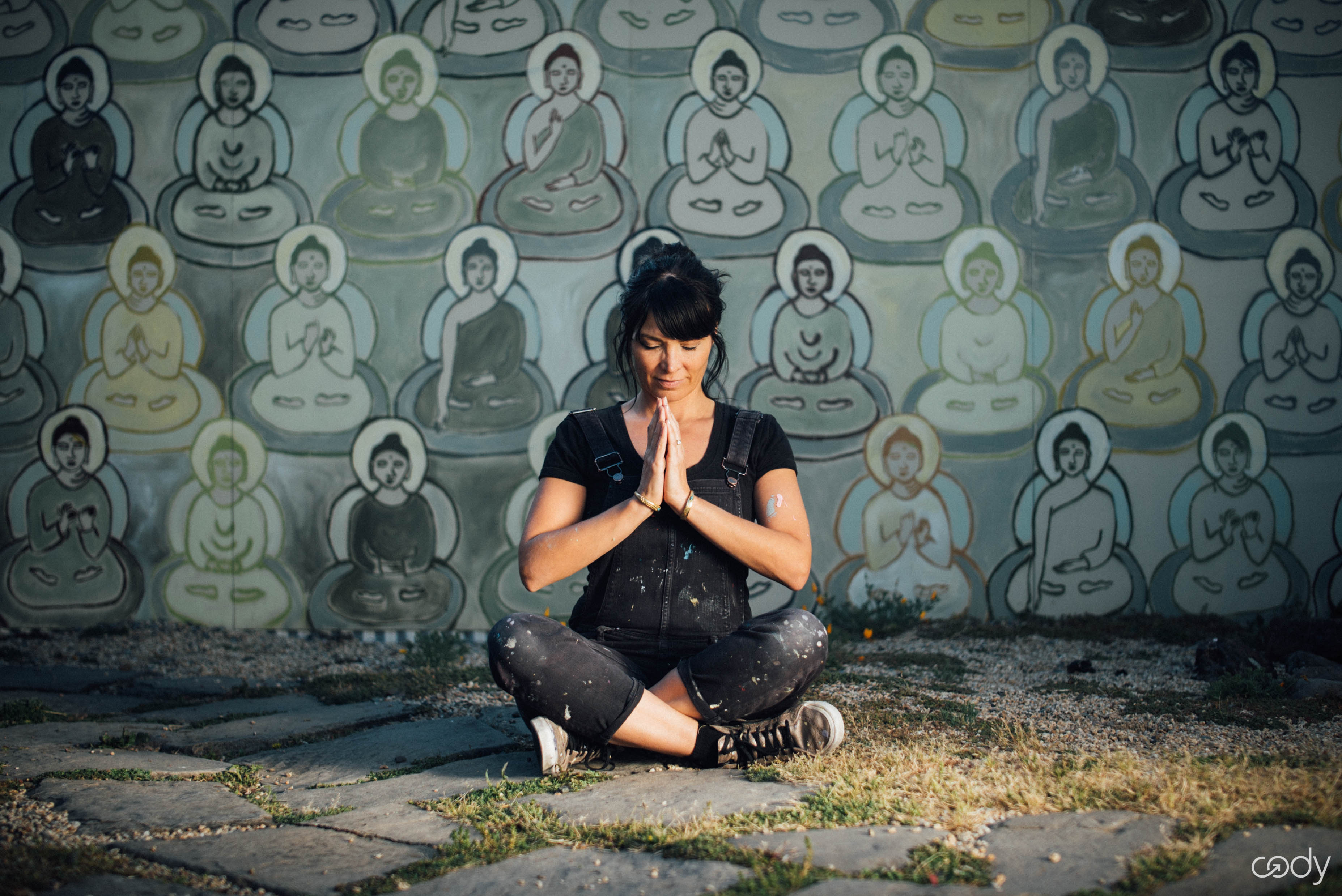