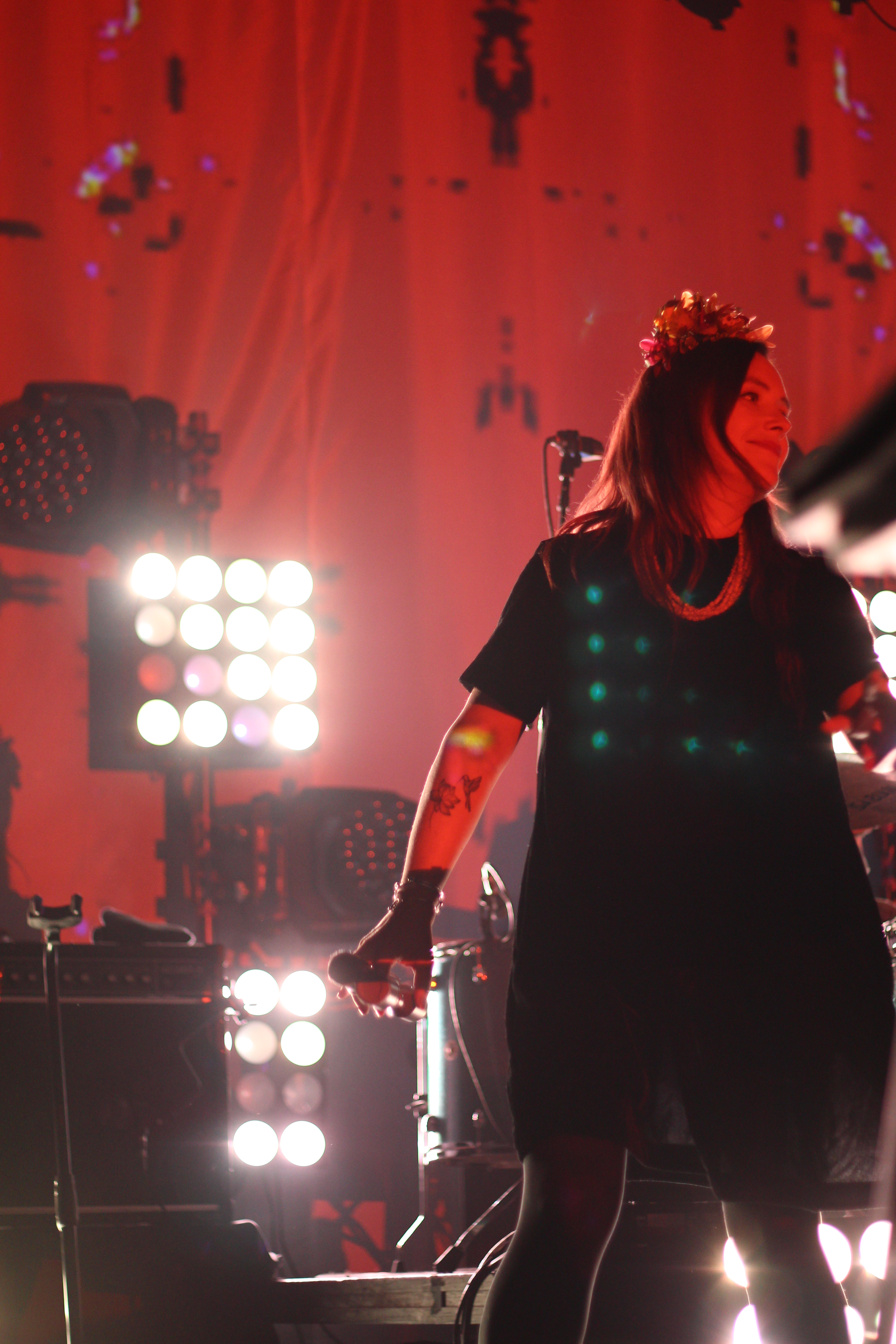 At just a few minutes before showtime, the Orange Peel is already getting full. People stand in lines for beers or merch, and the air seems heady with anticipation. The Big Ass Fan is sending out a sweet breeze and, finally, the lights go down.

There's been a lot of buzz around Slowdive, who recently released an album after more than two decades. 2017's self-titled LP (from Dead Oceans) is a nod back to where they've come from, with a whole lot of excitement about where they might go next. It marks an evolution in sound that can only come from a band like this, which has played together for years and has broken up and reunited. And the timing of it all is more than perfect: The people are ready for more Slowdive.

Slowdive's dreamy, shoegaze-y sound marries what was best about the 90s with the proclivities of audiophiles today towards fuzzy, pleasingly distorted synth-y sounds that might emerge from your brain just before waking. It's a very specific kind of music that could be hard to pair with just the right opening band. Enter Soccer Mommy, the NYC-via-Nashville-based outfit from frontwoman Sophie Allison. Allison's melancholic croonings set the perfect tone for a night with Slowdive.

Allison herself looks like she might have also stepped out of the 90s, with auburn hair framing her face a la Shirley Manson of Garbage. Soccer Mommy makes the kind of music you might put on after bingeing My So-Called Life (again), and that's really not a bad thing. Songs like "Benadryl Dreams" and "Try," wax poetic and present first-person narratives where the speaker pines for loves long gone, not yet realized, or inadequate in the moment.

That's not to say that Soccer Mommy is gloomy, though Allison herself describes the project as "chill but kinda sad." Rather, songs' subject matter is filtered through bright guitar and percussion that moves things forward rather than holding them in an emotional doldrums. There's just enough edge to songs to transport me nostalgically back to college days, when emo-tinged late afternoons faded into nights playing pool at the local bar with Le Tigre on the jukebox.

While Soccer Mommy's set was never completely upbeat, it did create a mood perfect for Slowdive, who took the stage just after 10. By this point, the Peel was packed and people were holding on to their spots intently.

This was the British band's first time in Asheville, and the crowd was keen on expressing their appreciation for the visit. Slowdive played a long set that lasted well after 11 p.m., cycling through old favorites from their catalogue, as well as songs off their latest release, including "Sugar for the Pill" and "Star Roving." Founding members Rachel Goswell and Neil Halstead are still the heart of Slowdive, providing vocals that trail into the ethereal realms. Goswell, looking the part of a mythological fey lady in her flower crown, was particularly captivating.

Slowdive has a distinctive sound, but it's far from monotonous. Songs might range from slow and brooding to soaringly transcendent, all with Slowdive's signature distortion and dreamy vocals. It's a testament to the band that they could keep the audience firmly rooted and afraid of missing a single song all night, which is exactly what happened.

The other unexpected element that made the night memorable was the light show, which included different elements for every song and provided some of the best eye candy I've seen recently. The stage was awash with everything from zig-zagging, staticky screens of black and white lines to washes of jewel tones and interlocking geometric shapes that fed into themselves and reemerged in new forms. I loved the intentionality of the lighting, which added an entirely new and welcome element to the music.

If Slowdive comes back to Asheville, they could probably book out an even bigger venue. I'm personally glad I got to see them at the Orange Peel, in a setting that's always felt comforting and home-grown. I'm also happy I was introduced to Soccer Mommy, who will likely be providing the soundtrack for an angst-filled teen drama soon.

Check out Soccer Mommy on Bandcamp.

Stream Slowdive's latest album (along with previous releases) on Spotify.