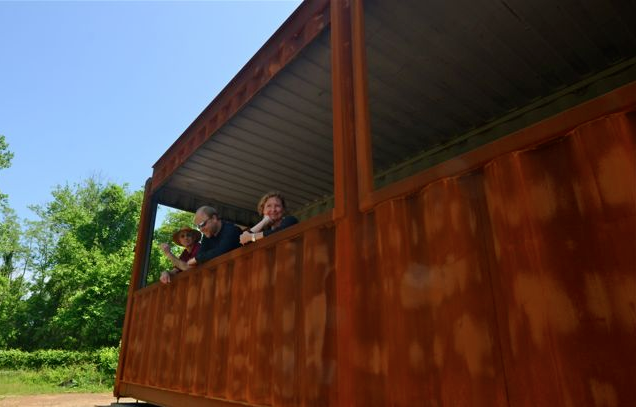 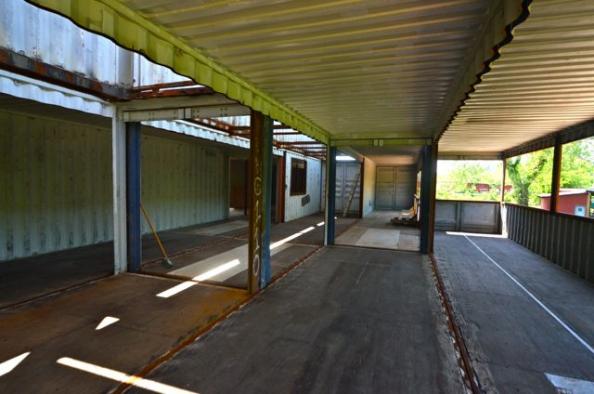 The rusted husks stacked along Riverside Drive don't look like much.
They are shipping containers. Nineteen of them, to be exact, delivered by SG Blocks, a company that calls itself "the premier innovator of commercial and private environments utilizing code-engineered cargo shipping containers." They've been cut and placed together to build a new riverside restaurant dubbed the Smoky Park Supper Club. It sits just north of where the Bowen Bridge flies over Riverside Drive.
"Smoky Park Supper Club will be the largest permitted container based restaurant in the US and we're very proud to be part of the group who delivered it," David Cross, the company's vice president of business development, said in a written press release. "The venue's uniqueness should be a real draw in Asheville," he added.
That may be an understatement from Cross, who was talking specifically about his shipping containers. Consider the Asheville crew that will give life to the space, and you've got all the ingredients for an iconic new Asheville destination.
Asheville resident Doug Hecker, a professor of architecture at Clemson University and lead designer on the project, connected the developers of the new eatery - Matt Logan and Kristie Quinn - with the shipping container company to make the structure happen. Hecker is known for his unique design work. (Myles Alexander is the architect on the project. David Well is the general contractor. Justin Belt is the project manager.)

The shipping container building technique has long been the vision of Logan, who bought the desolate riverside location about three years ago. It was a designated brownfield at the time, and a camp for homeless people and drug addicts. Logan is the owner of 5 Walnut, a downtown wine bar that has magic in its location, music, life and libations. Logan bought the property not long before New Belgium Brewing announced it would build its new $175 million East Coast brewery just across the river.
"We think this is a great project, and it's been a matter of taking a chance and going for it," Logan says. "There's a lot of that in this town, which makes it great."
Quinn is a well-known and beloved Asheville figure who has been involved in numerous projects. She's been key to building relationships with city inspectors and so many other moving parts required to get a new venture off the ground, according to Logan. Quinn said she can't wait to share the space with the public.
The final personality in the mix is Mark Rosenstein, the Asheville farm-to-table chef who was farm-to-table before it was cool. Rosenstein opened The Market Place in downtown in 1979 and helped pioneer the local food movement. His contribution is to set up the kitchen and cooking systems for a restaurant that will cook everything with wood fires. Wood-fired based cooking - for everything. Rosenstein and Logan bonded over a mutual admiration of Union Square Cafe, another iconic restaurant in New York City founded by Chef Danny Meyer.
Rosenstein will create a cooking system and menu inspired by Fancis Mallman, the author of Seven Fires: Grilling the Argentine Way. It's a trailblazing compendium, one that clearly gets Rosenstein fired up about possibilities. Rosenstein all but retired a few years ago after selling his restaurant to Chef William Dissen. But the new project has Rosenstein excited.
"I'm creating a new vernacular for what I've done before. I'm looking for the best foods and recipes for wood-fired cooking," he says, noting that the Smoky Park Supper Club is shooting for a range of offerings, from simple burgers for people pulling up on a river raft to a menu with a little more attitude for the sit-down restaurant. Look for a late-night menu, too.
"My goal - to far outshine what I did with Market Place," Rosenstein adds.
(Pictured above from L-R, Mark Rosenstein, Matt Logan, Kristie Quinn)