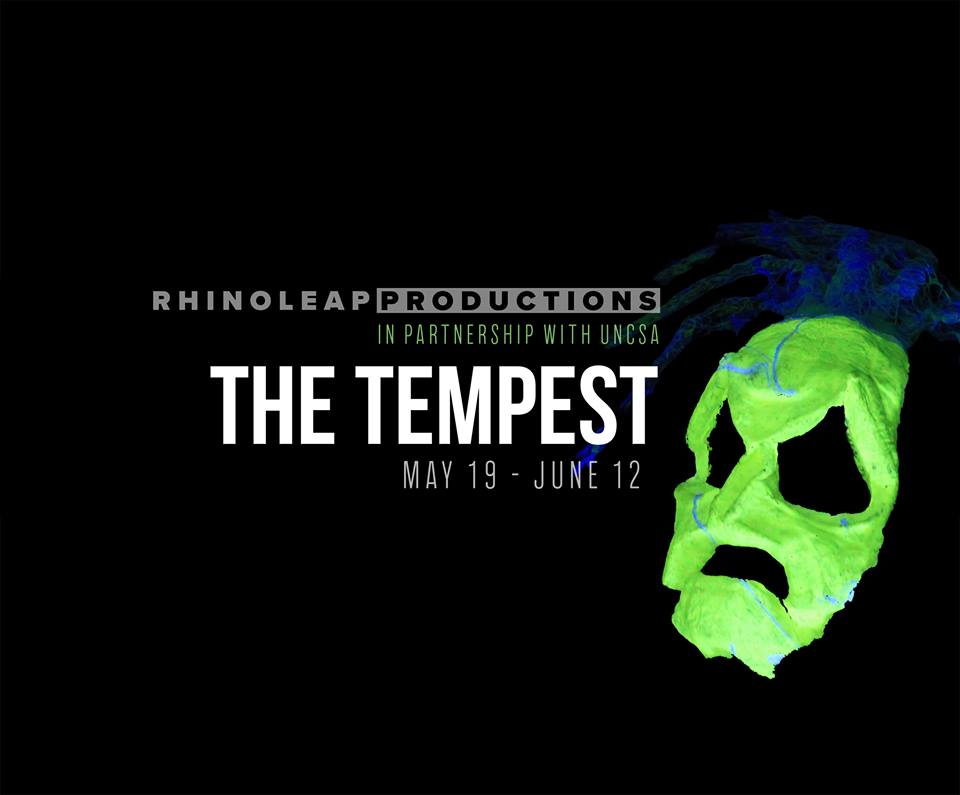 Rhinoleap, a new production company made up of North Carolina School of the Arts alumni and students, has a vision to bring innovative, original theatre to North Carolina. Their first performance run is an updated version of Shakespeare's final play, The Tempest. Filled with magic, otherworldly beings, and romance, it's a work that allows the creativity of everyone involved to shine. Rhinoleap's version features an original score from Andrew Wells Ryder, an updated script that includes sections of movement-based performance, and puppets. The play comes to Asheville's Masonic Temple from June 9-12.

"The North Carolina Shakespeare Festival was something I grew up on," says director Patrick Osteen. "It was important to me, and now it's gone, which is a huge bummer. But people are doing Shakespeare throughout the state, and I wanted to be a part of that. Every time I talk to someone who's been working with Shakespeare for a long time they always come back to how the text continues to work on them."

The Tempest was an obvious choice for Osteen and his father Thomas, the play's producer. "We wanted to do The Tempest because it's so imaginative," says Osteen. And, as he points out, it's a text that can resonate differently with audiences and actors at various points in their lives. "The stories Shakespeare wrote and the way he wrote characters really speak to human nature," he says. Osteen gives the example of NCSA's Emeritus Dean, Gerald Freedman. "This show has taken on an entirely new meaning for him, because it's about what it means to be at the end of your journey."

Osteen points out that Shakespeare is something that people have strong opinions about because of their familiarity and connection with the plays. "When you choose Shakespeare, everyone has an opinion about it. So you're inviting a lot of external opinion into it, and a lot of people come in thinking certain things about it already. People know the story, so there's a trickiness there, but at the same time this production is ours. We are a group of people doing the show this way, right now. It's worth taking on some of those challenges."

And it is, in every sense of the word, a team effort. "I found these folks who are really incredible talents and brought them on board," says Osteen. "From there's it's been about collaboration. It's people making a very raw concept into a reality."

One way Rhinoleap has made the play their own is with the addition of handmade puppets, which Osteen conceptualized and built with the help of a friend in New York City. He also brings quite a bit of puppetry experience to the table. "I was a puppeteer on War Horse for two years with Alex Hoeffler [who plays Prospero]," he says. "We played the same part of the horse--we were the 'heart,' the front two legs." 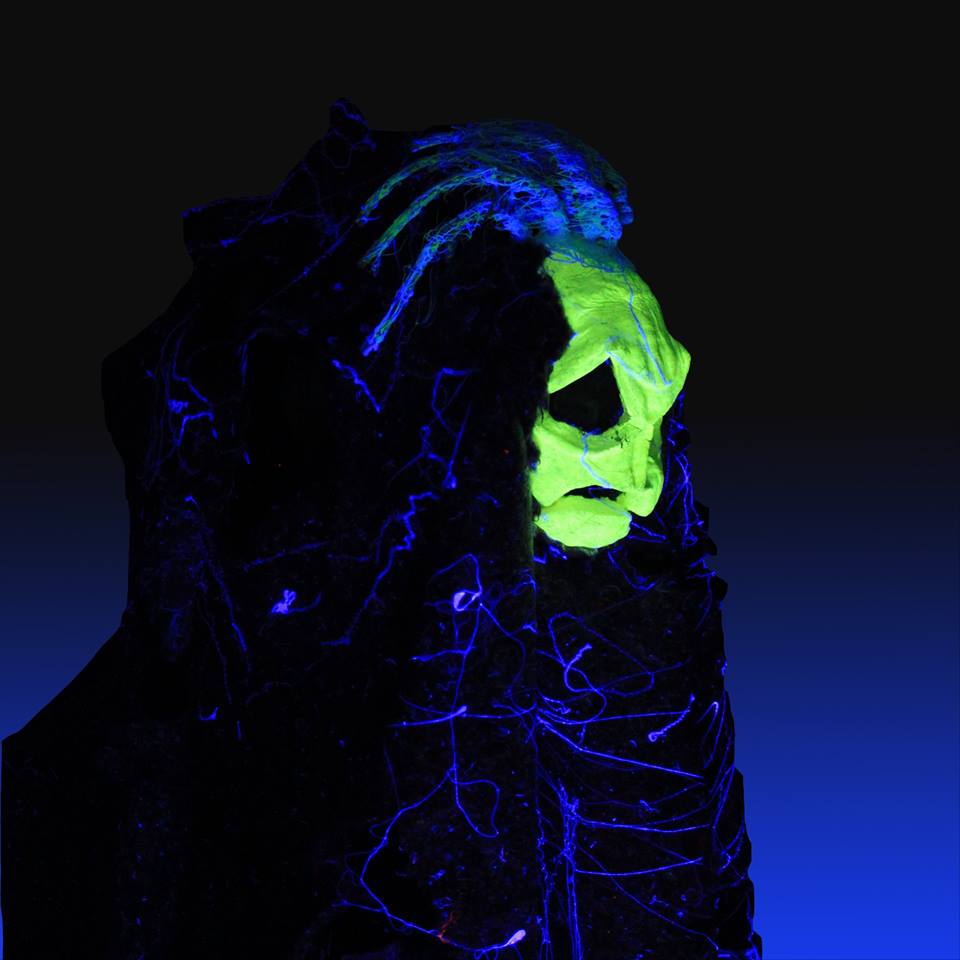 Halsteen notes that the puppets "are a really strong component of the show. They're well executed, really cool puppets, and they're handmade and beautiful."

There are three puppets in the play--one for Ariel, one for Caliban, and one for Prospero. "Three characters--well, two and a half--are puppets," says Osteen. "We have Ariel: a totally ethereal, inhuman spirit. And then Caliban: there's a man inside but it is very much the puppet. He has more humanity than Ariel, who is purely a spirit.

"Prospero actually operates through a puppet. He has chosen to create this larger version of himself using the mask, and he chooses through the show to operate through the mask or use it as a staff. It's a progression from full puppetry [the spirit Ariel] to almost human [Caliban] and then just human [Prospero]."

"We're not hiding the puppeteers," continues Osteen. "They're present and part of the story." The company actually decided to make Caliban's puppeteer more visible. "When we started out, he was entirely under the veil and you couldn't see the human at all. He operated entirely through the mask. ... But after thinking about it, we realized we must include his humanity in order to really tell the story of Caliban. It has to be about the marginalization of the human, not about him being a total monster. I built a new version of Caliban that allows the puppeteer to be more visible."

Osteen took on an additional challenge when it came to timing. "I wanted to do it in 90 minutes. Modern audiences appreciate that. We knew we could do it in 90 minutes--it just takes imagination. Shakespeare was writing at the time when it was encouraged not to be concise. He created a language that fed into that. He'd say everything three times, three different ways.

We've cut the text in a way that makes it sound very modern. The through-line is very concise. We've kept the way Shakespeare communicates, which by the end of the play sounds very natural, but we've taken out the redundancy by putting in entirely non-verbal scenes or having moments in scenes that are non-verbal. At some moments it turns into dance.

The format works well for Osteen and the cast and crew. "To me it's a more contemporary way of telling the story," he says. "At some points it's a story told through movement rather than text."

Devon Diffenderfer (Trinculo) points out that they made a careful decision not to update the language. "No modern text has been added. We're not going 'Yo, Caliban!' We know what we're saying, we've been classically trained, and it helps a lot when Shakespeare actors know what they're saying."

The play is ultimately part of Rhinoleap's larger vision. "We want to foster this group as something that continues from year to year," says Osteen. "We're hoping to eventually do three to four shows a year at places around the state."

The connection to School of the Arts will remain central to this mission. "School of the Arts was a very life-changing, important place," says Osteen. "I called it home for 5 years. We've all gone away and started pursuing different things beyond school, and this show is an opportunity to come back." Osteen hopes ultimately to create a liaison program between current students and alumni.

We have three current students in the show who are rising seniors. The rest of us are from several graduating classes that represent a range of years. Most of us live in NYC right now. The trouble of NYC is that the city requires so much capital to create something. I end up getting asked to do a lot of things for free by people who shouldn't be asking other people to do things for free. This [production] is an opportunity to come down here and actually do a show, pay people a working wage, and create a professional show in a place that's not saturated.

They're particularly excited to bring the show to Asheville. "It's a remarkable town," says Osteen. "When we first started working on the show, Asheville was on the list of places we wanted to take it. It's a miraculous place."

The Tempest runs Thursday through Sunday, June 9 through 12 at the Masonic Temple (80 Broadway St.) in downtown Asheville. Tickets are on sale now, and prices range from $15-34. The show starts at 8 pm Thursday-Saturday and 3 pm on Sunday.