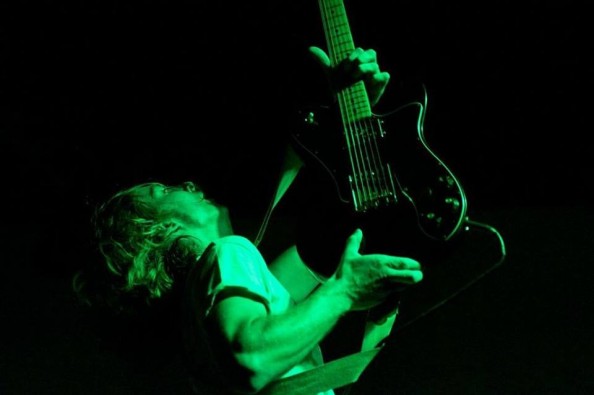 Andrew Scotchie's band The River Rats was little more than a sideline project when he first got the group together about two years ago.

But with regular gigs, a recording, and Scotchie's driving passion, and the band cementing its musical identity since then and this past summer, The River Rats won a Charlotte band competition. Their prize - a trip to California for a November 4th awards ceremony at The Fonda Theater in Hollywood.

The red carpet treatment - and a couple of gigs around Los Angeles - has Scotchie and his bandmates poised for their next big break. They've signed on with their first booking agency. They're planning a second record. And they're working out details of a tour.

It's all heady stuff for 21-year-old Scotchie (and his similarly aged band members), who says he just wants to, "keep it as real as possible."

"I want to keep connecting with people through music. I still have a lot to learn, but this is my passion - spreading the gift of music," Scotchie said in a recent interview.

Just a couple of months ago, Scotchie (guitar and lead vocals) and his crew - Asher Hill on bass, Eliza Hill on drums, Alex Bradley on trumpet and Kyle Snuffer on trombone - won the blues showcase of the Charlotte Music Awards. Each year, the CMA sponsors a series of showcases highlighting various genres, all as a way to highlight the region's rich and diverse music scene. The CMA's are the work of Jeffrey Cheen, who had a 40-year career in the music business and worked for big labels, and Michael D. Evans, who has built his career in communications.

The River Rats won in the CMA's blues showcase. Labeling the band a "blues" band is a bit of stretch, but Scotchie doesn't mind. He cites several influences, from Southern Rock to Punk. He's got a vocal style that listeners will find familiar from those genres. (He says he was hooked on live music after seeing Lynyrd Skynyrd and .38 Special in concert.) And said he loves dynamic dimension the horns give his band. But as for the "blues label, "blues are the roots of rock 'n' roll, so it's all good," he said.

Scotchie writes The River Rats tunes, turning to friends and family drama for much of his inspiration.

"The overall dynamic of a family is accessible. A lot of people relate to that. It's relationships, you know? I try to be honest. I don't like to sugarcoat anything," he said.

Another big source of inspiration for Scotchie is his father, who died on Scotchie's birthday when he was 15. "He was a huge force in my life, showing me how to connect with people and how to be a better person," Scotchie said.

Aside from the work with the band, Scotchie is also happy with the growth of Barnaroo, a music event he started in 2009 as a way for he and about 100 high school friends to get together and jam (check out a full concert clip below). This past year, the event moved to Frannie's Farm in Leicester, where Scotchie and his band hosted 12 other bands for a full day of music. (The event also added overnight camping.)

"I was blown away by the number of people who came out. I feel like it really came together this year," Scotchie said. "It makes you believe your hard work can pay off."

Scotchie said he's excited about the networking opportunities the California trip will afford the band. Aside from the awards ceremony, The River Rats will play a couple of gigs before the whirlwind trip is done. Then it will be back to Asheville, where he said he's looking forward to a Nov. 12 show at New Mountain with Sister Sparrow and the Dirty Birds.

"We just want to make Asheville proud," Scotchie said, "and we want people to know we're in it to connect with them."