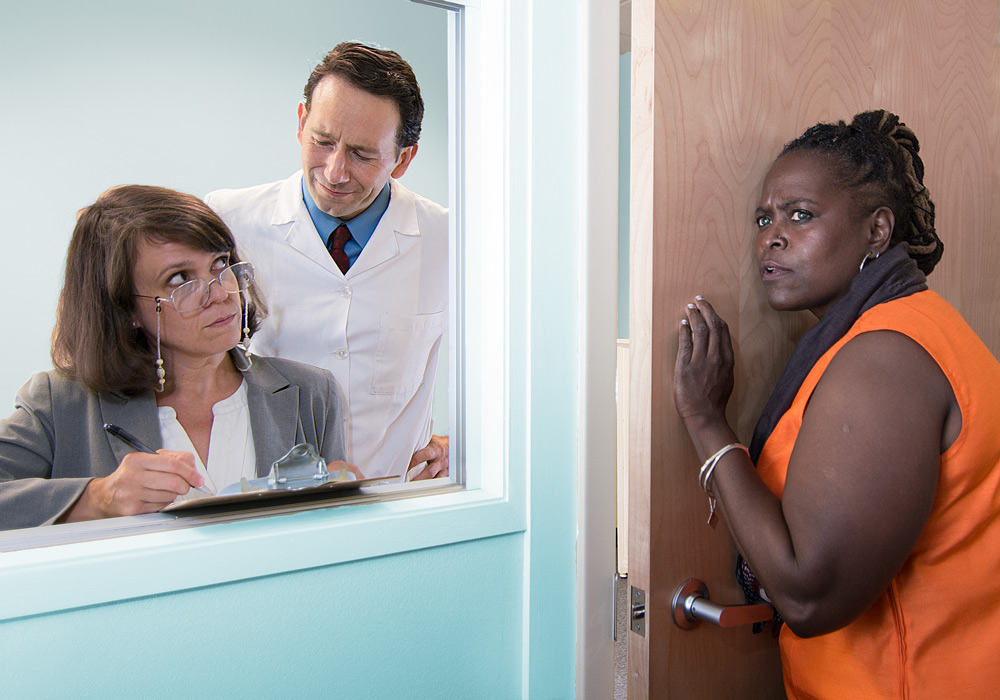 Rasheeda Speaking, a play that examines race relations in the workplace in a supposedly "post-racial" America, was written by Joel Drake Johnson and is directed by Scott Keel and Assistant Director Nathan Singer. The play opens on Thursday, September 1, and runs on weekends (Thursday-Saturday) until September 17, airing at 7:30 pm each night. This recently off-Broadway play is being put on by Different Strokes! Performing Arts Collective, which is invested in bringing works about racial, social, and cultural diversity to the stage.

The show summary is as follows:

Upon returning from a few sick days, Jaclyn notices some disturbing changes in the doctor’s office where she works. Meetings are happening without her. The doctor is acting even more awkward than usual. And EIleen, her co-receptionist, is now her boss. She’s not stupid, though. Instead of letting them force her out, she flips the script — with some good, old-fashioned psychological warfare. Rasheeda Speaking is a darkly funny, satirical depiction of workplace dynamics in “post-racial” America. Or is it a tightrope-walking thriller? (It depends on who you root for.)

The show, which debuted in Chicago in 2015, went on to run in New York with a cast that included Tonya Pinkins and Dianne Wiest. Managing artistic director Steph Hickling Beckman "chose this play last year as the Black Lives Matter campaign began to pick up steam, particularly around the death of Sandra Bland.”

Rasheeda Speaking will be the third show in the company’s sixth season. “It could not have been more relevant then, or now," says Beckman. "Given the fact that both the playwright, Joel Drake Johnson, and the director, Scott Keel, are white males, I look forward to our Post-Show Discussions on Friday and Saturday nights. It will be interesting to consider what these particular perspectives have to contribute to the current national discussion on race in America."

The play seems tailor-made for Different Strokes. The show's "provocative central relationship, thinly veiled racism, and crackling interpersonal tension," which flares up through "office power plays, catty receptionists, subtle (but-not-so-subtle) racial tension, and the cool condescension that only an out-of-touch boss can dish out" ensure that this will be a provocative and darkly humorous evening out. Rasheeda Speaking stars Steph Hickling Beckman, CJ Breland, Kristi DeVille, and Eamon Martin.

Take advantage of the Early Bird Special: Get your ticket(s) by September 4th and you won't be charged any extra fees. Tickets are available here. For more information, check out the Facebook page here.