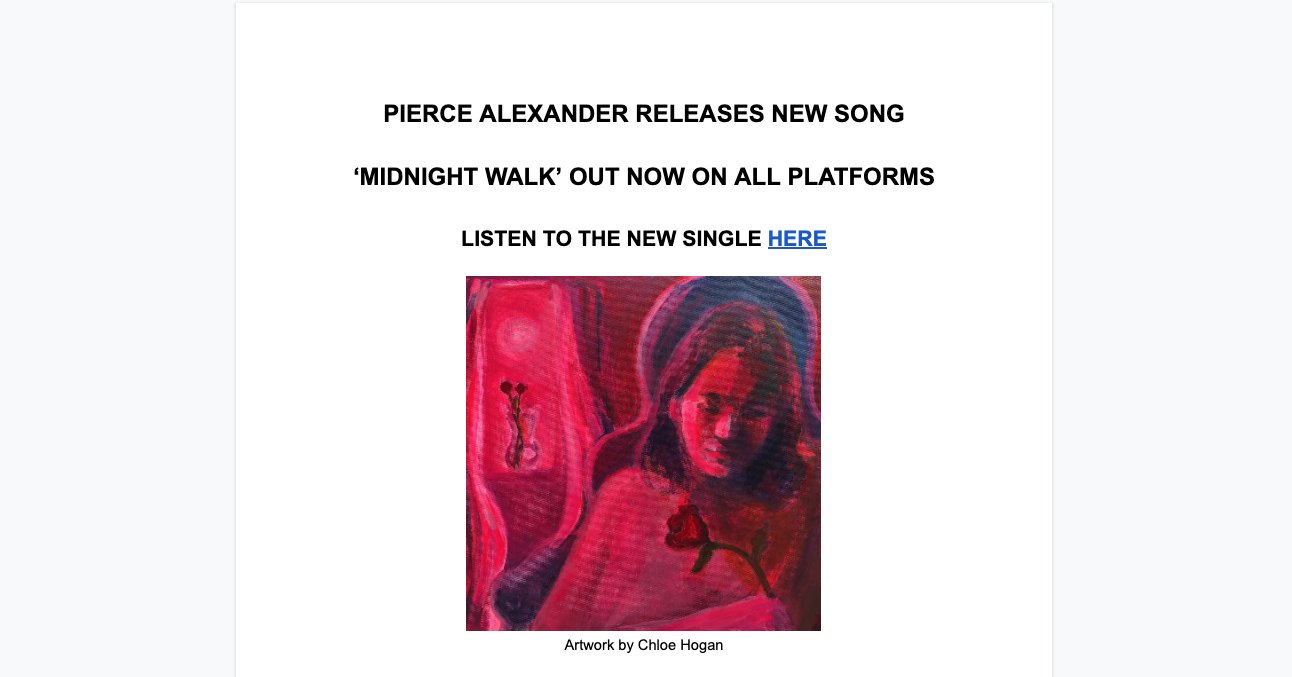 ‘MIDNIGHT WALK’ OUT NOW ON ALL PLATFORMS

LISTEN TO THE NEW SINGLE HERE

Pierce Alexander, based out of Charleston SC, has just released his new single, ‘Midnight Walk’. It’s the musician’s first release since his debut album, The Minutehand, which dropped in February.

‘Midnight Walk’ opens up a window into the life of a narrator who is attempting to pick up the pieces of a broken marriage. Though Alexander has never had to go through this himself, he comments, “I have a fascination with putting myself in other people’s shoes and coming up with these semi-fictional stories. It sometimes gets so intense that I start to feel like I really am going through the scenarios.” Alexander’s vocal phrasing has an almost country quality to it during the verses of the song, and the slide guitar performed by Charlie Kendall reinforces it. The lyrical centerpiece for the song is the poignant realization, “I say too much and I apologize again / It feels like I don’t know you anymore.”

The song was recorded and produced by Charlie Kendall and the recording process was full of unusual and unorthodox recording techniques. As a way of getting Alexander out of his head, some of the early vocal takes were recorded while standing on top of a ladder. According to Alexander, Kendall even had him perform a few songs in public places shortly before tracking to avoid overthinking. In the past, Alexander would often labor over every part for his songs. For ‘Midnight Walk’, many of the parts were recorded in one or two takes. Recording this way gives the song more of a bedroom pop vibe. Pierce had this to say, “We didn’t really overthink anything on this song and I think it shows kind of a new and maybe more raw side to my music that people probably aren’t as used to hearing”.

You can stream the new song now on all platforms and catch Pierce Alexander at Lo Fi Brewing Friday, October 7th with Deep Sea Peach and Katie Sachs.