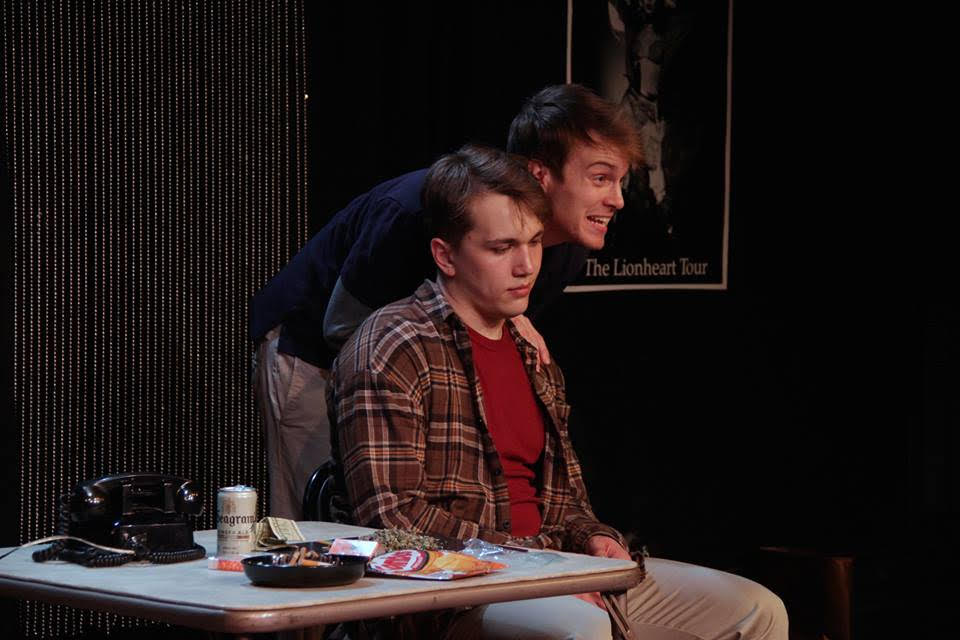 This is Our Youth

“The duty of youth is to challenge corruption.” – Kurt Cobain

The quarter life crisis and post college days of configuring the jigsaw puzzle of becoming an adult and charting a course forward is part of growing up. Old friendships sometimes fade or become strained as we move in new directions and our personal identities become more clearly defined. The three characters in this play seem to have very personally determined or delegated roles. The cast of actors, Maximilian Koger (Dennis), Timothy Luke Johnson (Warren), and Elizabeth Babelay (Jessica) shine and are well suited and highly effective at fully embodying the many dimensions and moods that This Is Our Youth requires. Director Robert Walker has clearly crafted these young actors to access a range of emotions and sustain the energy that the performances demand in this challenging and intense piece. Maximilian brings a particularly devilish double shot of intensity to his portrayal of Dennis.

Dennis and Warren grew up together in a world of privilege. Dennis takes on alpha male posturing and rages with cruelty at sad sack Warren when he shows up with a large sum of cash stolen from his nefarious father. Desperate schemes ensue and are concocted by a manic Dennis to sell drugs and Warren’s cherished vintage toy collection in order to save both their hides from any potential wrath by Warren’s dad. Warren is no lady’s man and Dennis makes it abundantly clear but soon a romantic subplot develops when fresh faced and feisty Jessica arrives to the apartment while Dennis is out taking care of business. Let the awkward wooing begin.

The claustrophobic set is rich with period detail and is appropriate for the setting of a New York City apartment in the early 80s as well as a way of capturing the dark intimacy of these characters. Confined space could even be a theme to describe the play, as the characters seem to feel confined in situations and damaged by their upbringings. They certainly don’t want to become their parents and break out on their own.

We get to know these characters at the same time they seem to be figuring themselves out.  By the end we see their facades crumble and find some redemption. I think anyone in the audience will have a different and their own individual reaction to the play and how they interpret the three protagonists. Reflecting on the play days later I wondered, where are Dennis, Warren and Jessica now 35 years later?

Performed in 35below. Produced by The Actor’s Center of Asheville. Penned by Pulitzer prize nominated playwright Kenneth Lonergan, This is Our Youth follows forty-eight hours of three very lost young souls living on Manhattan’s Upper West Side at the dawn of the Reagan era. Funny, painful, and compassionate, the play provides a living snapshot of the moment between adolescence and adulthood.