The Orbiting Human Circus of the Air: Interview and Ticket Giveaway!

The Orbiting Human Circus of the Air: Interview and Ticket Giveaway! 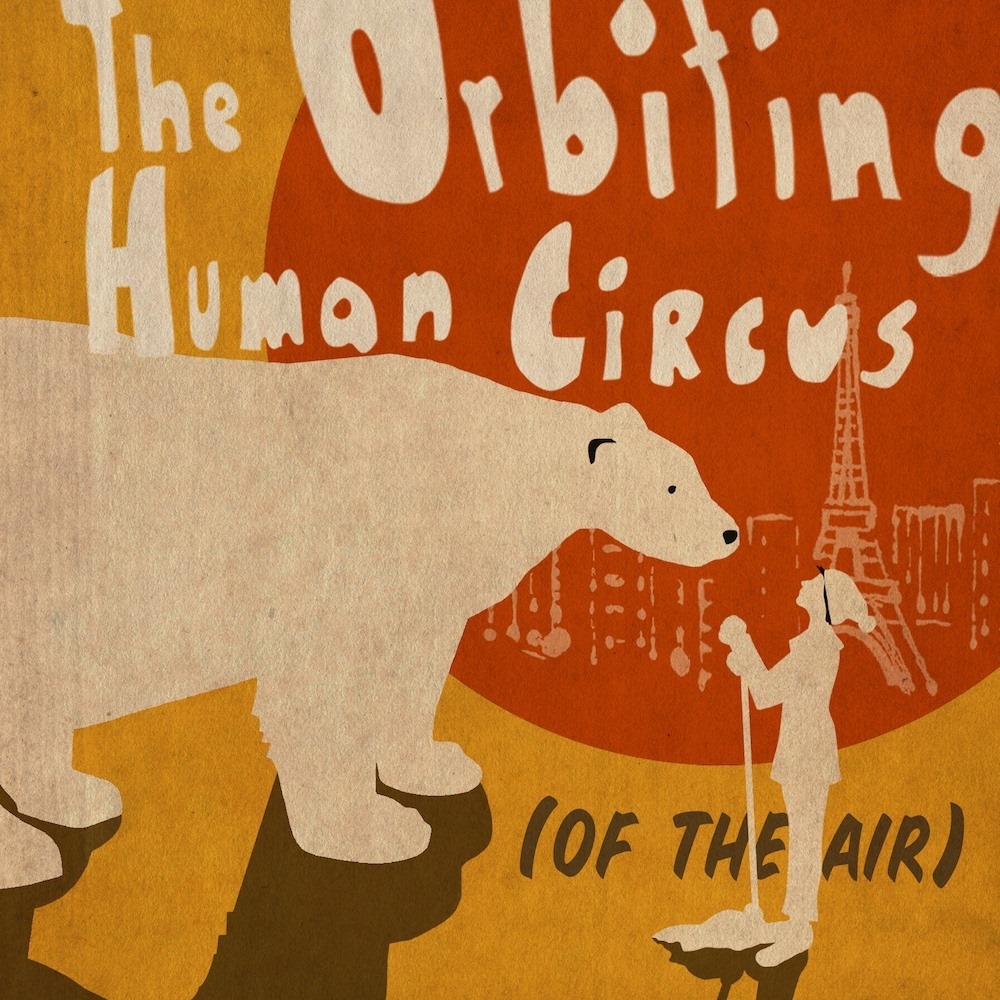 In a timeless and whimsical version of Paris, a janitor employed to clean the Eiffel Tower longingly awaits his debut on an old-timey radio variety show, The Orbiting Human Circus of the Air. It's a quest beset by mishaps and waylaid by fantastic creatures, remarkable stories, and intensely imaginative song and performance.

It sounds like a dream, but in fact it's a podcast. The Orbiting Human Circus of the Air, produced by Night Vale Presents (the people behind the hugely popular Welcome to Night Vale), features surreal and phantasmagorical story lines that all connect back to one person: Julian, the less-than-adept janitor. Voiced by podcast creator Julian Koster (of The Music Tapes and Neutral Milk Hotel), the Janitor, we come to find out, is searching for something more than just fame. The story of Julian's trials and travails is interspersed with the radio show itself (which has the same title as the podcast), which includes fanciful musical numbers, special guests, and strange stories (one, for example, is about cannibalism). The show has also featured guest appearances by celebrities including Tim Robbins.

Both the podcast and the radio show within the podcast are deeply imaginative and packed with wondrous details. This, dear readers, is why it's so exciting that The Orbiting Human Circus is going on the road to bring the Janitor to venues across the country, which he will attempt—and fail—to clean as he is beset by myriad guests, performances, and other distractions. Of course, podcasts aren't visual, but like radio shows of the past, they easily spark imaginative conjuring. The Orbiting Human Circus does a particularly good job of world-building that will translate well to the visual mode of performance.

The show comes to the Grey Eagle on Tuesday, May 30th, at which point the Janitor will descend upon the unsuspecting folk of Asheville for "an immersive evening of songs, stories, games, magic, and more," according to the press release. The whole shebang will be helmed by the Janitor and Julian Koster's band, The Music Tapes (Elephant 6 Collective/Merge Records). We got a chance to talk with Koster about the podcast, the show, and (in the spirit of The Orbiting Human Circus), his inspirations and his dreams. 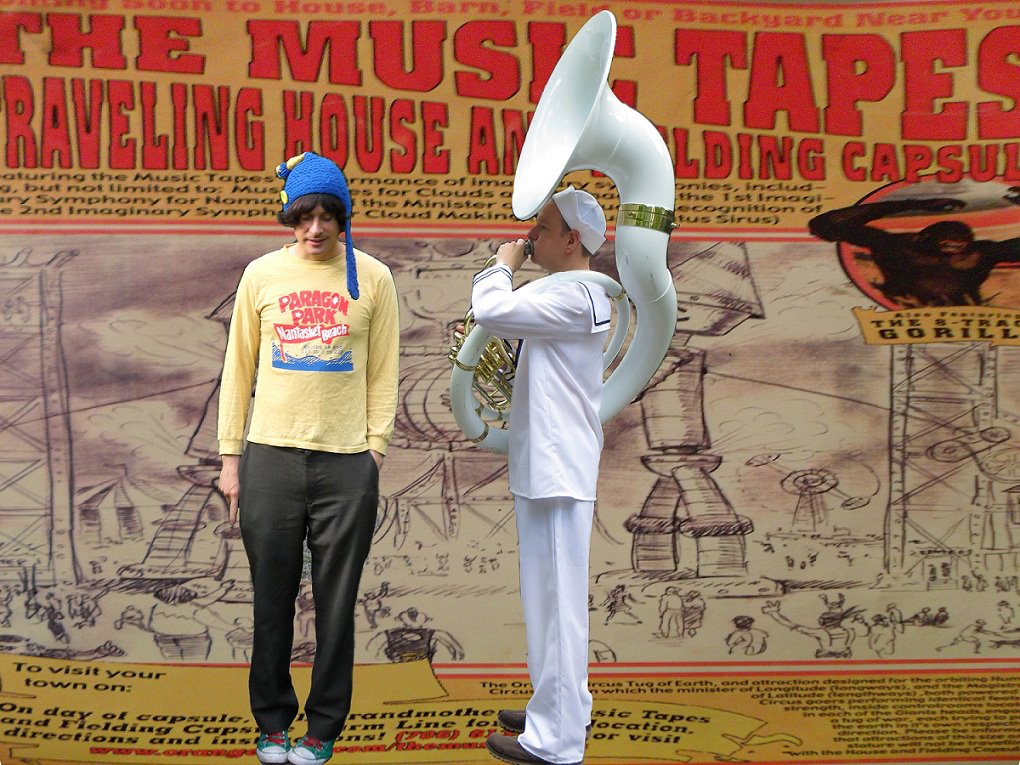 I know that this show preceded the podcast, and that it really started with The Music Tapes and some early performances that introduced the characters and basic storyline. introduced some of the characters, at which point the sho was part of The Traveling Imaginary. Can you talk a bit about how the story and these characters got started? What's the Janitor's origin story?

The show is partly about the contrast between the transcendent magic in life and the chores and scary things in life. I think that for the main character, the janitor in the Eiffel Tower who wants to be a part of this surreal, beautiful, magical show on the stage, the fact he's a janitor in life is kind of ironic. Because he was forced to be the janitor in his parents' house as a child. He was made to do all the cleaning. He had a rough childhood and ran away to escape that, but then all he knew was cleaning. It was his only skill, and so those were the jobs he could get. And he hates it and is terrible at it, so he actually didn't get to run away. He has to face it, and his past, and so he's facing it with his imagination and its capacity for wonder and adventure and amazement.

So in a sense it's a lot like life. I think we always were excited about making records and stories, and things that told stories that people could lose themselves in, like adventures or amusement park rides. The creation process is like building an amusement park in the imagination and going on all of the rides yourself. You're going down this hill and you're going to scream, but you also hope [the audience] will scream, that it will be exciting. So you send it out into the world and hope it becomes an exciting, and a comforting, place for people to visit.

The cultural explosion happening now with podcasting is making room for new art, new experiences, and new audiences. We had been making concept records for the Music Tapes, and we'd include a lot of storytelling and sound effects in there. We kept pushing the envelope with that, but with this new form we can take people anywhere. People are thirsty for something really fun and new, and for someone who wants to make things it's the most exciting frontier, to craft something that feels exciting and new and know that there's somebody just waiting for it.

We conceived of the live show at the same time as the audio show. The Janitor is in the live show, and a lot of things in the world of the radio show are there, but if you've never heard of the podcast it doesn't matter at all. The experience of the live shows is of walking into another reality. The Janitor has been hired to clean the Grey Eagle, which will be "closed" for cleaning, but you're simultaneously walking into a space where everything is wrong. Everything is upside-down and topsy-turvy, and impossible things are happening around you. It's a circus of the Janitor's imagination. You're literally walking into his imagination and his world. So if you know the podcast, you're walking into that, but if you don't it's almost more of a surprise.

There's a wonderful way in which the podcast moves from deeply personal stories—Julian's stories and others'—to the radio show and its "variety" moments. Can you talk about movement from the personal to the radio show, which is designed for entertainment? How much of the Janitor's own story comes from personal experience, or from stories you've heard or collected over the years?

Sometimes a story, a really wonderful story, can more accurately tell the truth about a situation than factual circumstances do, so I always feel like they're all true. They all address things that are very real. Some are personal experiences, but at the same time what makes a story such an exciting, magical thing is that if you like it yourself you like it because it's also expressing a truth in your life, and it's kind of about you. That's why I think, in a weird way, products of the imagination are often superior to recitations of any kind of facts. Reality is a product of the imagination anyway, it's just that stories cut out all the boring stuff, because stories, and shows like this, are meant to be fun, and adventurous, surprising, and thrilling.

The world of Orbiting Human Circus feels outside of time and place. It's Paris, but it's a Paris filled with surreal, otherworldly details and it's at no specific moment. Can you talk about the decision to set the story this way?

Is definitely is outside of time and place. I think the main reason for that is because it's kind of like the experience of joy, or special moments. Whenever we're in a really special moment or something really joyful, amazing, and remarkable is happening, our sense of time is completely gone. It feels like time has stopped. It's just not present. So i feel very excited about making things that simply exist outside of time. And doing that live and in the audio show is my main goal. Then anything can happen.

There are so many references in the podcast, and I noticed a lot of Eastern (and Western) European influences in particular? Can you talk about that aesthetic or flavor?

I have some blood that goes back to that area. I love fairy tales and weird, strange customs. There are customs that we're more familiar with, things like Santa Claus, but there's also an endless variety of funny little customs, folk beliefs, legends, and bizarre traditions passed down through generations. Those are some of my favorite things, and I feel like that's where real magic lies. All of us are building these meaningful rituals founded in our choice to believe in something, our choice to make believe. Like parents in one part of the world might tell their kids that there's a Santa Claus and allow their children to believe that. And the parents might dress up in a funny way or do little things to keep that belief alive. Then, that child will do the same thing. It's reality-building or world-building. It's the same thing we do in building societies, except we're doing it for the sake of love, for the sake of specialness, or the magic of life.

What are you reading/watching/listening to right now that's inspiring you?

I brought an Isak Dinesen book with me on tour. She was a Danish writer from a noble family—actually they were all people of letters—but her imagination and stories just kill me. I just love her stories; they're an example of pure imagination. She's not sitting there trying to turn something into a metaphor, or preach to you, or write a specific kind of story. She's sitting down and letting something come from the depths of creativity itself. You get things that are real and organic miracles. It's like if you look at a cherry tree and go, "How did that happen? Where did that come from?" There's just no explanation. And you could walk by and never notice it, but you can also have the air knocked out of you. You could stop and remember what it is to be alive.

Is there anything you want to reveal about Season 2 of the podcast?

All I can say is that I'm pretty excited about it. It's going to be really fun.

Did you have imaginary friends growing up?

I had imaginary realities. I had whole realities I would disappear into, and I didn't limit it to just sentient beings. I still do by the way. Except now they're some sort of creative product.

Are you influenced by dreams at all in your storytelling process?

When you're just letting something come creatively, that part of the process is so similar to the dream state. The wall is pretty thin, although I think you tend to steer the ship a little bit more. But it's similar in that it ideas just come that way. In dreams it's just a little more random, though.

Catch  The Orbiting Human Circus of the Air with Julian Koster and The Music Tapes live at the Grey Eagle on Tuesday, May 30th. Tickets here. We're also doing a Facebook ticket giveaway that will run until May 25th. To enter, just leave a comment and tag the friend you'd want to bring on our post announcing the giveaway.

Check out the first episode of The Orbiting Human Circus of the Air right here: