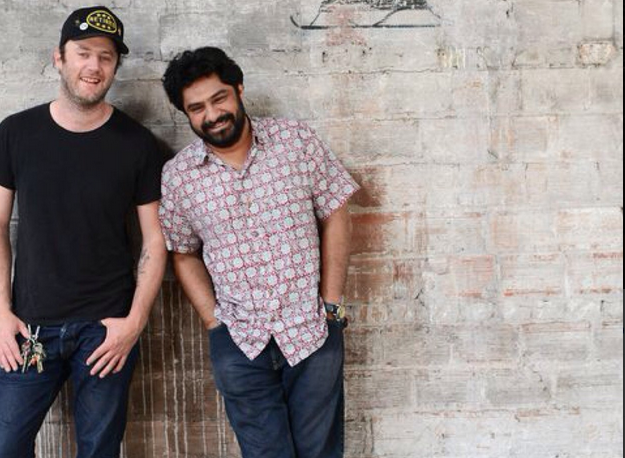 Congratulations to Elliott Moss and Meherwan Irani on their new, exciting venture on Asheville's South Slope. Here's the pertinent info from Meherwan himself:
The Name:
Buxton Hall Barbecue

The Location:
32 Banks Avenue, aka The Standard Paper Sales Co. Building on the southside of downtown. Our neighbors will be Vortex Donuts, Public School and a few more yet to be named.
The name of the hill that the site is on is called Buxton Hill. You may recall that Elliott was first looking at 15 Banks and the project was going to be called Buxton Hill. The building has an iconic look & feel, and an amazing history. At one point in the 30's, it was a roller skating rink. The main hall is 4500 sf with soaring barrel shaped ceiling, skylights, gorgeous wooden floor, floor to ceiling windows overlooking an amazing view. It's at once welcoming, grand, steeped in history and faded with time with the texture and patina of almost 80 years of history.
The Story:
Chef Elliott Moss has been dreaming of opening a true wood smoked, whole hog, artisanal BBQ restaurant for many years. It's his roots (he grew up eating BBQ in Florence, SC), and similar to the way we at Chai Pani are passionate about Indian food, he's passionate about bringing back the real deal BBQ.
The Concept:
Wood smoked, whole hog BBQ restaurant with Elliott's signature style.
Authentic, no shortcuts, old school tradition meets chef-driven technique, rustic yet elevated, artisanal BBQ.
Ingredients with integrity, local products, sustainable hogs, seasonal driven recipes.
Affordable and approachable with the warmth, hospitality, service, culture and operational excellence that Chai Pani strives for.
Timing:
The building is undergoing renovations and upgrades by the owners before it'll be turned over to us for our buildout. We're projecting a fall opening and will keep you posted as we get closer to buildout phase.

Meherwan and Elliott became friends late last year as they discovered a common passion for food and excellence. Meherwan was drawn to Elliott's vision recognizing his talent, passion, and work ethic. They started talking about a partnership in early 2014 and both recognized the opportunity to open a landmark restaurant in Asheville.
Elliot will bring his considerable talents to the kitchen and will be co-owner and Executive Chef.
Meherwan, Molly, and the Chai Pani team will bring their experience in hospitality and operations to the project. Meherwan and Molly (along with their partners in Chai Pani) will also be co-owners.