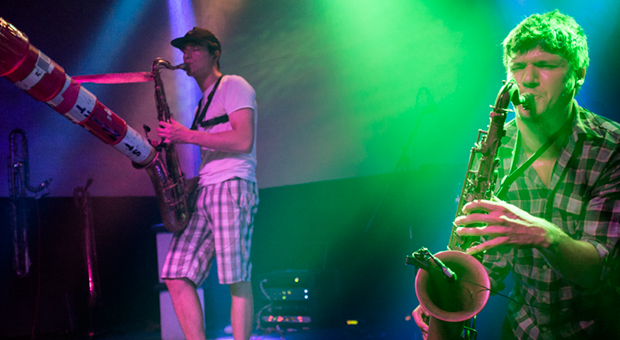 Moon Hooch, from Brooklyn, has a mission statement. "As a band, we strive to use the universal power of music to inspire connection between people, to influence a sustainable culture in which basic human needs are met, and to contribute to the organification of all aspects of our lives."

A bold mission for three young musicians from Brooklyn, but one they're pulling off, if their show at New Mountain on Tuesday was any indication. It was probably the most singular act I’ve seen since arriving in Asheville, and one of the most impressive. If you're an EDM fan, you'll love their show, even though there are no sequencers. If you're not an electronica fan, Moon Hooch might still get you moving, and you may find yourself enjoying some of the common tropes of EDM when they're actually being played, non-stop for an hour and a half, by three seemingly indefatigable musicians. They call their sound “Cave Music”: like House, but “more wild, more jagged, more free, more natural to live in”. Now you see what they were getting at with their mission statement.

From the moment they stepped onto the stage, they had the audience captivated. I saw many turning to each other and shaking their heads in disbelief throughout the course of the night. Propelled by James Muschler, a drummer able to match the precision of a sequencer, saxophonists Weznl McGowen and Mike Wilbur blew a jazz-tinged set of catchy melodic riffs and the heavy bass one normally associates with EDM, thanks to Wenzl’s contrabass clarinet and a sanitation department traffic cone sax bell extension (see the set pics above). Is it the “bazookahorn” they mention in their CD liner notes? Sounds about right. Occasionally Mike Wilbur would step forward for an extended Philip Glass-like circular breathing riff before the whole band set off again. You can see some examples of that in a short montage of smartphone video clips I shot that night on YouTube. (Forgive the video quality!)

Moon Hooch has been in town before, most recently opening for They Might Be Giants at the Orange Peel, and to my knowledge this was their first headlining show in Asheville. Porch 40 from Cullowhee opened, with a great set of clever stutter-step funk and silliness that got a warm reception from the crowd.

Moon Hooch has been around for a couple of years, but you will be forgiven if you’ve never heard of them. Here are some links to catch you up. Get educated!