"The Merchant of Asheville" at The Magnetic Theatre

"The Merchant of Asheville" at The Magnetic Theatre 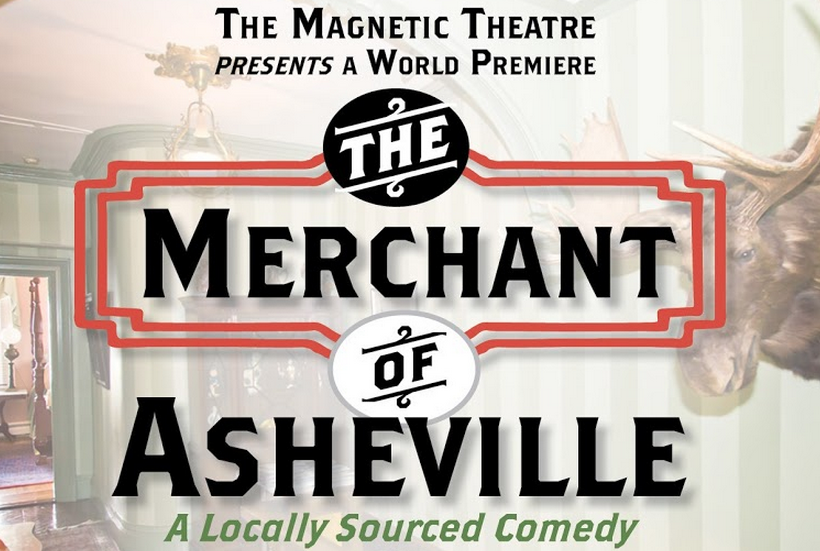 In glitzy, tourist-filled Asheville, there seems to be a pox on our house – after all, we have a both a complicated economy and local history, and our current growth surge is a fight between old and new.

Interestingly, an audience member of The Magnetic Theatre’s The Merchant of Asheville, penned by TMT artistic director Steven Samuels, need only walk out of the theatre to consider the relevance of the community dialogue segments of the show suggest. This is the second production staged in the company’s new permanent home, Magnetic 375, which is directly across from where it was housed between fall 2010 and spring 2013 before again borrowing various local stages. Four and a half years ago, the Depot Street end of the River District was still emerging, and The Magnetic Theatre and its adjoining cocktail bar The Magnetic Field were among the first wave of development of a stretch that is busier today, albeit still evolving.

The Magnetic 375 space is beautiful, with a spacious lobby, a comfortable house, and intimate blackbox stage whose sightlines are excellent. The theatre-going experience is among the most pleasant in town, perhaps because the space in which the theatre was built was sufficiently large and well-proportioned for building a not-so-awkward theatre space.

Any production by The Magnetic Theatre—true to being the only professional theatre in the southeast dedicated exclusively to original work, giving local artists the freedom to express and try out new ideas—is usually not performing what will end up being the final draft of a given play. Rather, many plays are in the workshop stage, and it appears this is the case for The Merchant of Asheville. The show is billed aptly as a “locally sourced comedy,” and lives up to this promise. The ample humor in the first act depends on knowledge of local references, and may sometimes lost on out-of-town audience members—and it was during the performance I attended. Impressively, the actors managed many a hard-earned giggle out of a quiet audience without forcing.

The first act seems influenced by Molière in the way it sets up the central problem: Straight-laced Louise (Samantha Stewart) is dedicated to the Wink Inn in Montford, the pet project of the nostalgic Marvin (Darren Marshall), her past-loving father, while her entitled and undersexed mother Sylvie (Tracey Johnston-Crum) is resentful of her marriage and the bed and breakfast, whose financial viability is heavily in question. Louise’s wild college friend Tanisha (Kirby Gibson) and her eclectic boyfriend Jededdiah (Joe Carroll) arrive, embodying several Ashevillian stereotypes, looking for employment alongside Bartleby (Badi Mirheli). The second act opens with the execution of a scheme that could be out of Shakespeare’s Twelfth Night, which is interrupted by the timely arrival of the title character (Steven Samuels).

Of the excellent cast, Caroll is a standout, and his character’s confusion inspires many organic laughs. The script is often funny, albeit sometimes disorganized or unfocused. A lot of relevant issues to Asheville get name dropped (some sloppily), from the tension between a tourism economy and the creative sector to the disparity between the working class and entitled old money set, and race and ethnicity are an undercurrent. From playwright to cast, risk-taking is the order of the evening, and it’s a delight, albeit an imperfect one.

The set is well-dressed by Erin Owens; it certainly looks like the reception room of a Montford bed and breakfast, and the Montford Neighborhood Association historical banner and framed Biltmore Village Craft Fair poster on set are thoughtful touches. Jason Williams’ lighting design is effective, particularly in the sequence at the top of the second act. Mary Zogzas’ sound design is strong throughout the show. Scott Fisher’s costumes are attractive and generally character-appropriate. However, Tanisha’s and, moreso, Jedediah’s costumes might benefit from being somewhat grungier to better convey their olfactory offensiveness, upon which other characters remark occasionally. The show runs smoothly, owing to stage management by Walker Linkous and assisted by Justin Evans and Katy Hudson.

The Merchant of Asheville runs Thursdays, Fridays, and Saturdays through July 4 at 7:30 p.m. at Magnetic 375, located at 375 Depot St. in the River Arts District.