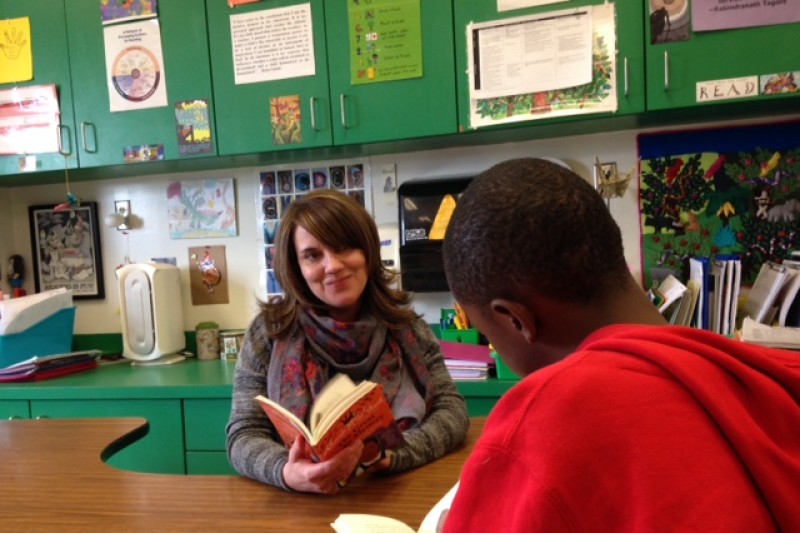 From the organizers:
Mela Indian Restaurant will be hosting a worthwhile benefit to raise money for cancer warrior, Laurie Joens, a teacher at Vance Elementary School, and long-time Mela patron and friend.
As Mela continues to flourish, owner Anoop Krishnan continues to recognize and humbly give back to the community who has made his dream a reality. This year, upon learning of her stark cancer diagnosis, Mela regular Laurie Joens approached Anoop with a request to host a benefit in the endless effort to raise money for medical expenses related to her ongoing treatment. Breast cancer is an issue that Anoop holds dear, as his new wife, Julie, is a seven-year survivor, diagnosed in March of 2008, but in remission since April of that same year.
In February 2015, Laurie Joens was diagnosed with Grade 2 Invasive Moderately Differentiated Ductal Breast Cancer. Laurie is a 42 year old mother of two, Zachariah, a soccer player at the University of North Carolina at Asheville, and Samuel, a rising third grader at Vance Elementary in West Asheville, where Julie’s daughter attends fourth grade. Laurie is also the dedicated caregiver of her father, who suffers from a number of debilitating medical illnesses.
Laurie is a Title I Reading Specialist who has procured several grants for eligible Asheville City Schools students in need of assistance, and has touched the lives of many through her years of service and commitment.
Laurie endured a bilateral mastectomy on March 16th and continues to undergo expensive treatments and therapies. To date, Laurie’s GoFundMe campaign has reached roughly half of her $15,000 goal.
Anoop and his team are honored to be able to support Laurie in this difficult time, and to offer her family some relief, hope, and peace of mind.
“We hope that the publicity and momentum of celebrating ten years will draw the attention and support of both our current and potential clientele, to maximize the benefit that this fundraiser provides to Laurie and her family,” Julie said.
“We are confident in, and looking forward to, the outpouring of love and support, characteristic of this compassionate community, in our efforts to raise money for an important, personal, and urgent cause,” says Anoop.
The Laurie Joens benefit will take place throughout the day on Tuesday, July 7th, between the lunch hours of 11:30 AM and 2:30 PM, as well as dinner, from 5:30 PM to 9:30 PM.
20% of all profits earned on July 7th will be donated to Laurie’s fund.
To make a donation to Laurie’s GoFundMe campaign, please visit: www.gofundme.com/lauriejoens
Mela Indian Restaurant is located at 70 North Lexington Avenue in Downtown Asheville 828.225.8880