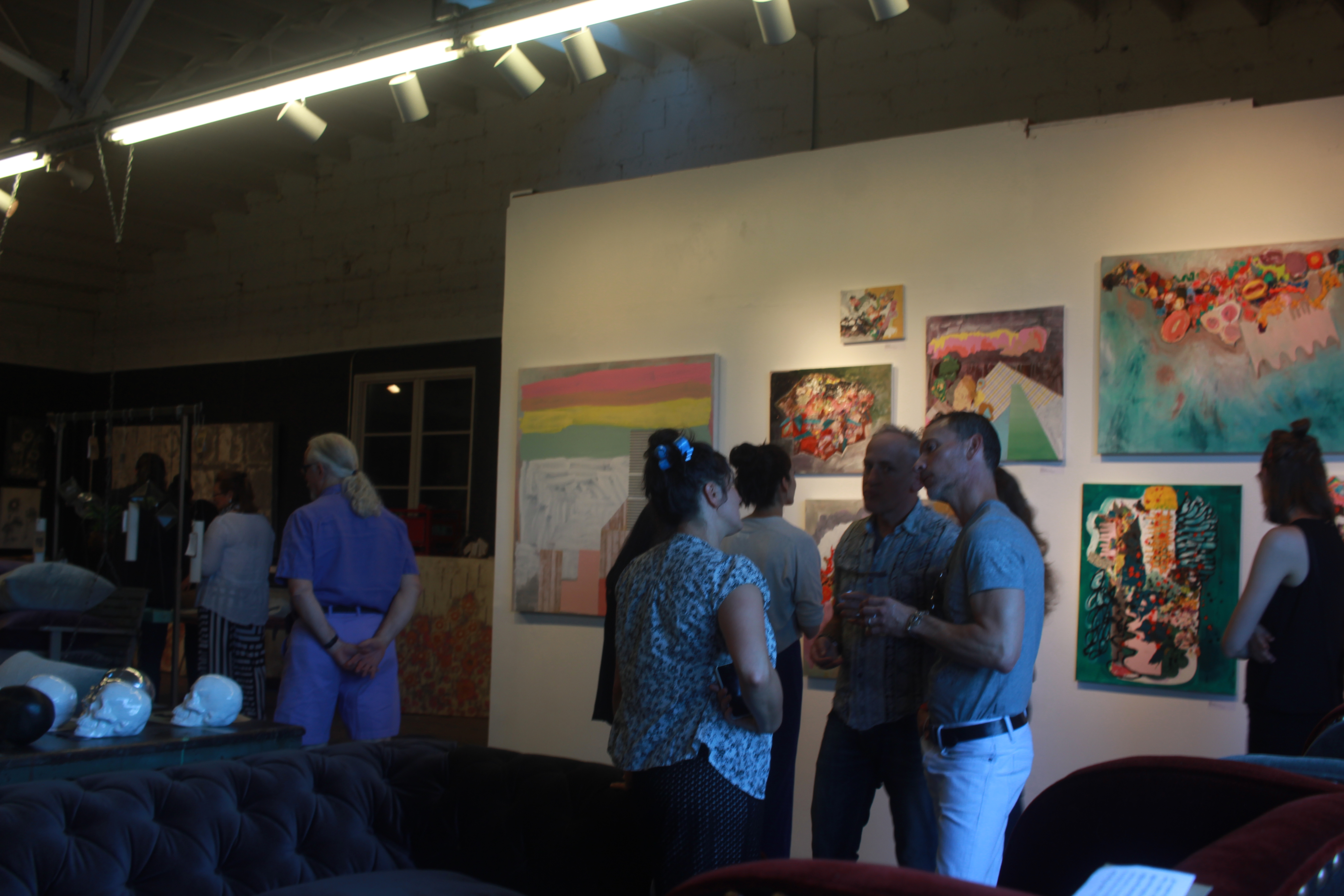 Passing along the back roads leading to downtown Asheville, there are some non-descript gas stations, a few here-and-there restaurants and quite a few rusty, automobile garages.

And, most recently, a hip art gallery.

That’s right. Whether or not most Asheville natives have heard of London Road, show them the area where it is located and the initial adjectives that will probably come to their mind are rust, soot and maybe the sound of some types of tools being used to crank down an old Chevrolet or some other relic of Americana transportation. 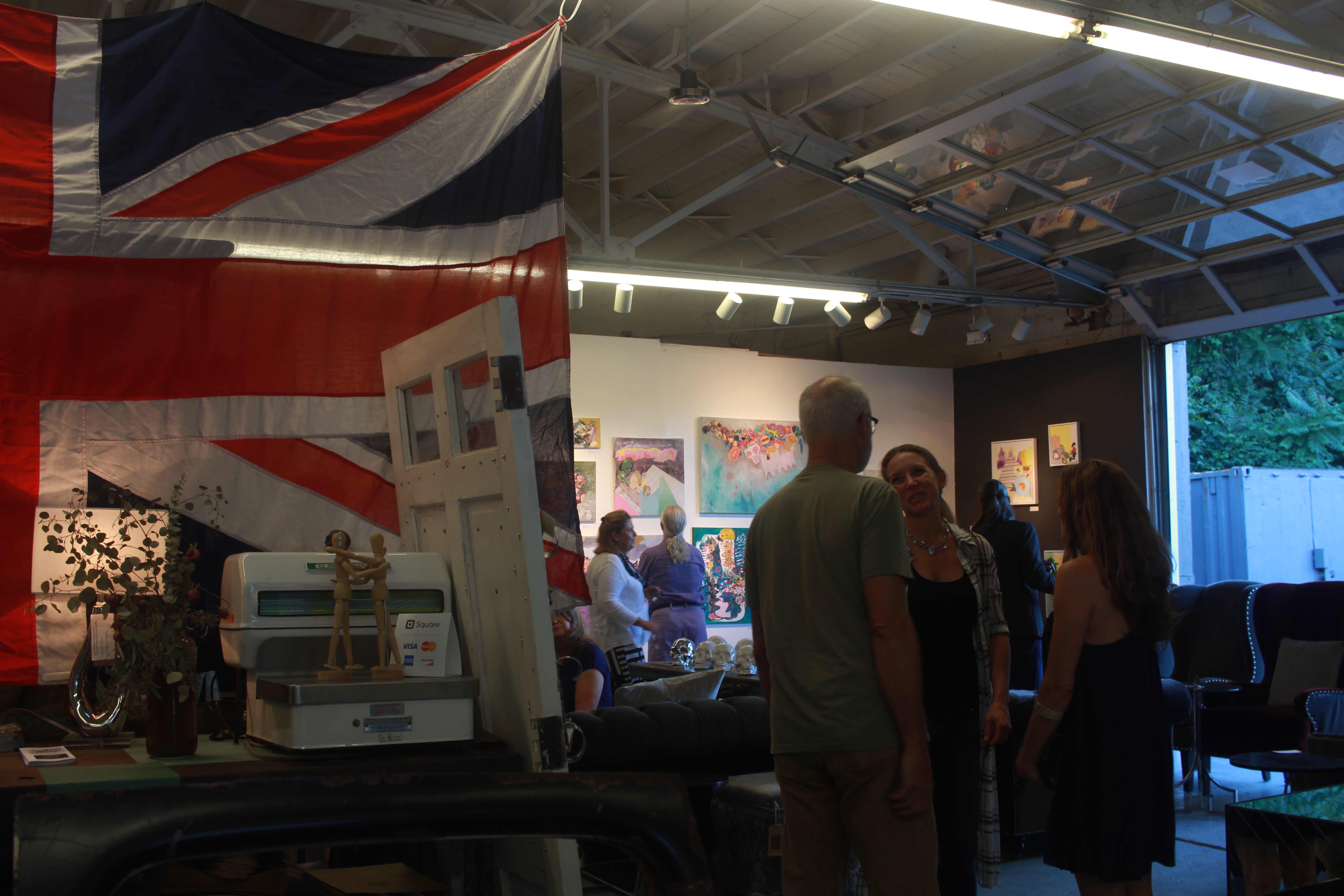 So, when Leslie Roland and Wade Opplinger chose to open the London District Studios, a gallery inside an old warehouse in this area right before you enter the cusp of downtown’s carefully-crafted eccentric whirlpool, it provoked intrigue and curiosity amongst the Asheville community.

“I think it’s a big surprise for most people so far. We’ve had many people stop, because it’s not a usual shopping street, you know?,” says Opplinger, a self-described upholstery merchant who crafts and designs the home decor elements in the gallery.

Opplinger, who calls his artistic style modern but not contemporary, says that his work has a timeless quality but with more modern lines, incorporating shapes specific to the 1960s and 70s.

Roland, a Ft. Lauderdale native, creates the majority of artwork inside the rustic warehouse and says that the overall ambience of the gallery is designed to fall within the ethos of these eras, specifically the art scene in 1960s SoHo. 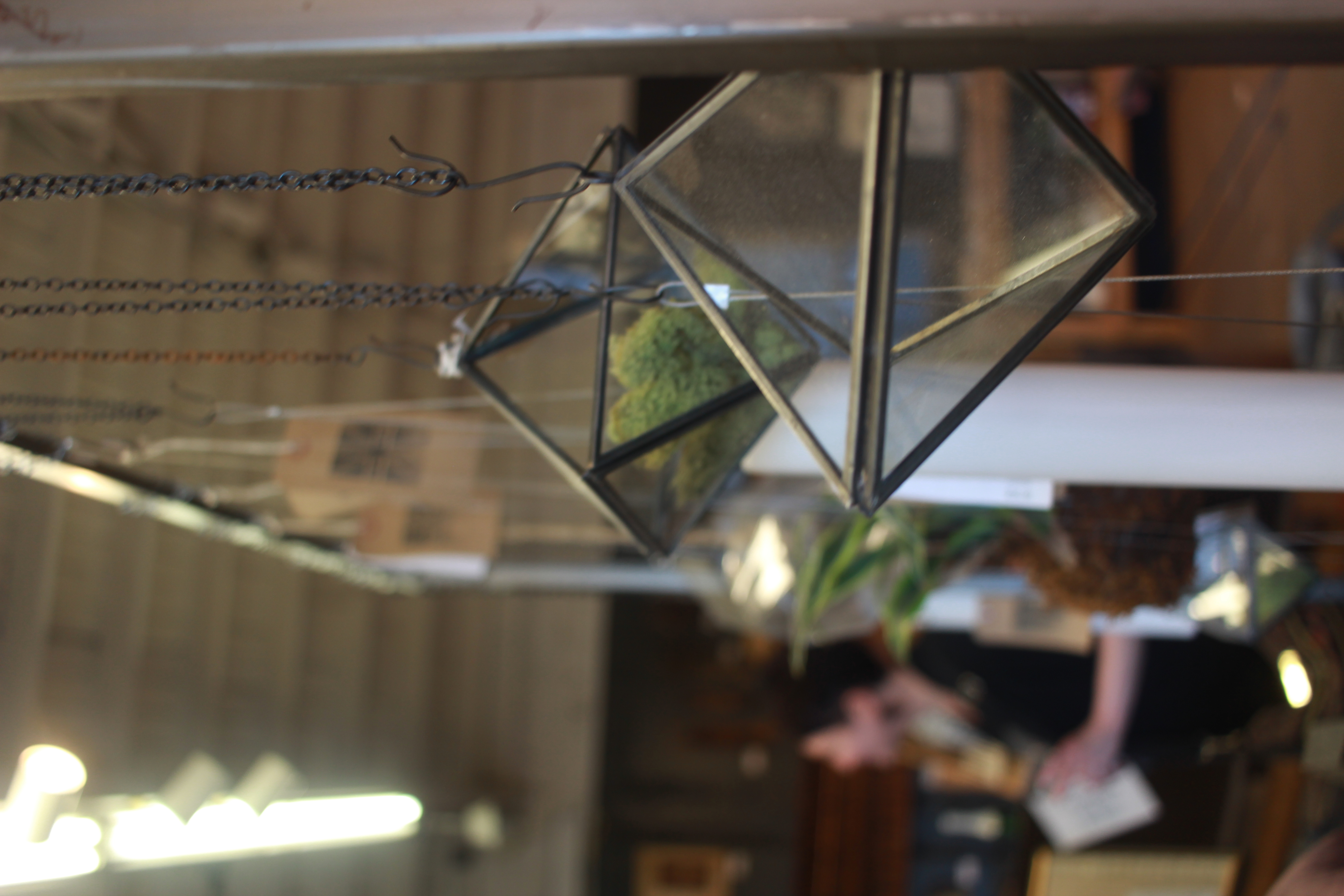 Leslie Roland's artwork can be seen throughout London District Studios.

“The SoHo in New York started off in gritty sections of town because the rent was cheap. So you had really beautiful, fine art showing in places with rusty old wood beams and pipes sticking out of the wall,” Roland says. “So we took the warehouse and of course, we painted it up, but it’s still an industrial area. It’s turning, but we’re the first ones here, so it kind of has that grit and that edginess of early SoHo.”

The feel of the gallery definitely borrows from the past, but reinterprets it with a hip, modern air. It provokes questions, asks you to do research to find out the origins of the faded, mod posters stamped on vintage black car doors, and shows how otherwise boxy, industrial components that we see everyday can be reconceptualized and used in a new way as creative fixtures in our lives. 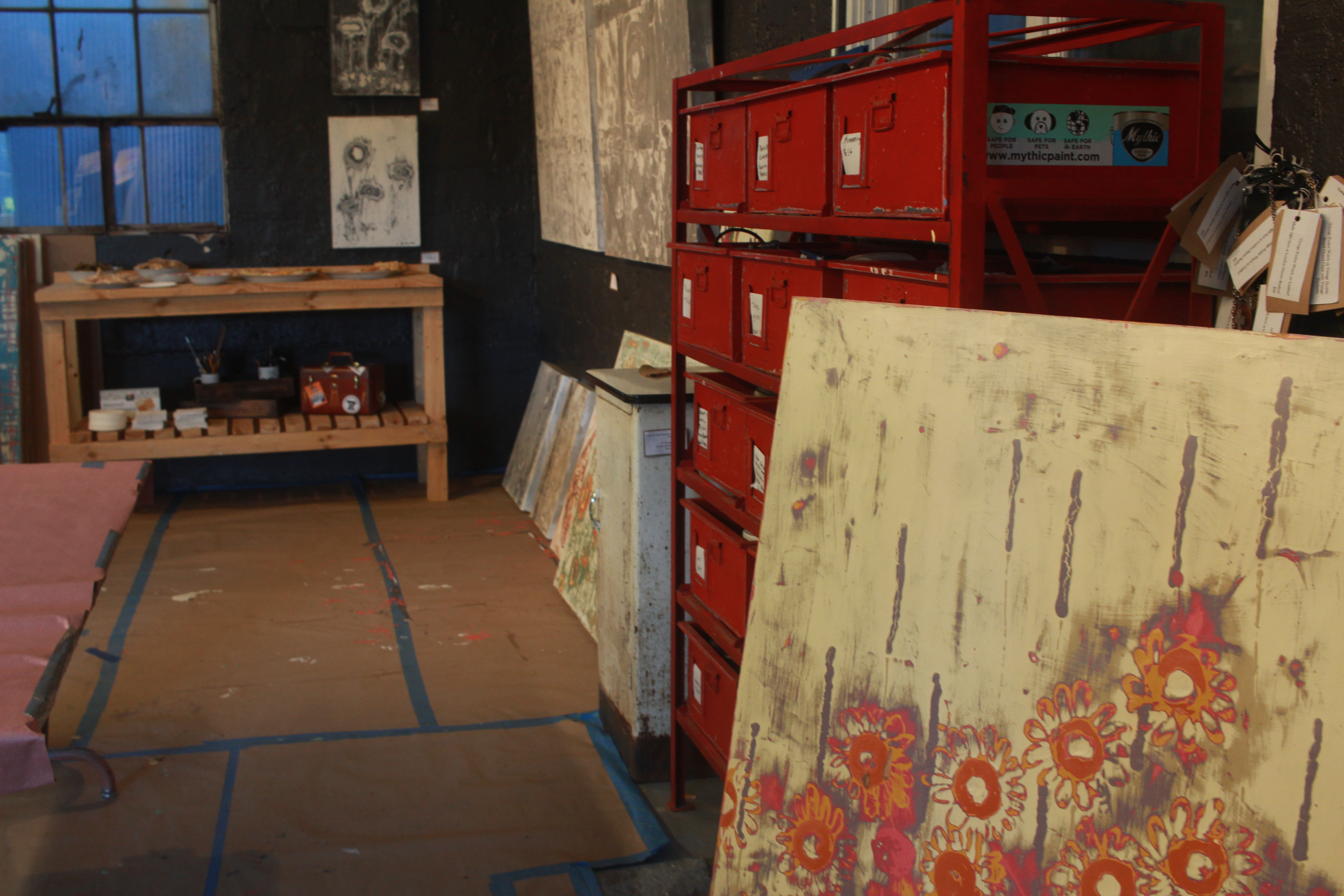 The interior of the London District Studios is filled with repurposed objects and art.

Opplinger, originally from Southern California,  says that the different creative mediums himself and Roland work with are what makes the vibe in the gallery multidimensional.

“I think we have similar tastes and we use color differently, mostly because of our mediums,” Opplinger says. “But our taste is sort of similar and I think it comes from the fact that we’ve both traveled a lot and experienced a lot of things.  We’re sort of boiling down places we’ve been and people we’ve met and things we’ve seen.”

Since opening in March, the gallery has attracted an eclectic assortment of Asheville-based artists, including, most recently, Ursula Gullow. 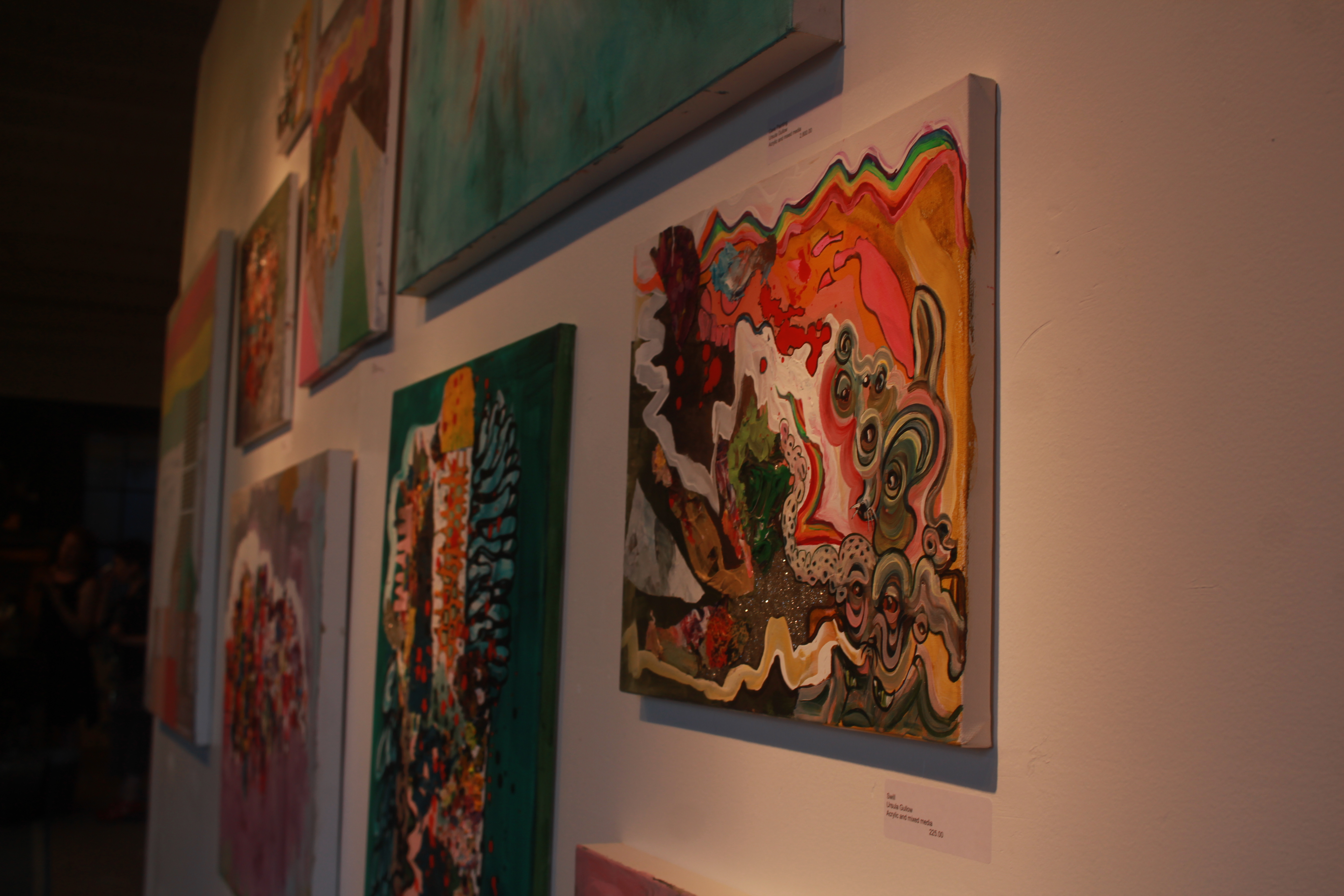 Gullow, whose exhibition entitled Confetti had its official opening on June 10th, said the gallery has an original vibe in a city that prides itself on its creative energy.

“I show downtown at the Haen Gallery,” Gullow said. “I do much different work there, and so I had been working on these and I thought they would be a good fit for this space.”

Confetti, a colourful, eye-popping series of pieces composed of many different types of media, is surprising and difficult to categorize. Gullow describes the series of non-representational art “comprised of elemental gestures, dribbles and amalgamations, conveyed in synthetic color, as suggesting corporeal terrains teetering between celebratory and sick.”

At first glance, it seems a bit more dramatic and wild than the other minimalist-style work and decor that decorates the gallery, but, upon second thought, the amalgamations Gullow describes as characterizing her work fit right in with Roland’s and Opplinger’s patchwork philosophy.

“You end up with people that like both of our work. They tend to be people who’ve lived similarly and they’ve been exposed, gone around, been in cities,  just kind of vagabonded around,” Opplinger says. “So that seems to be our thing.”