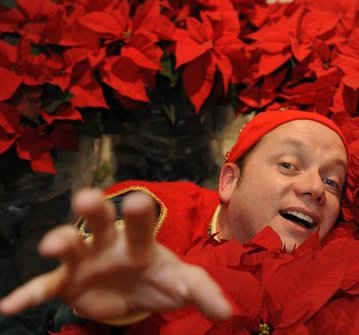 There’s much more going on in this town than craft cocktails and 150+ varieties of local patchouli body spray. And the last Thursday of every month means it’s time for “Listen to This – Stories in Performance.”
The storytelling series in the vein of “The Moth” or “This American Life” was created by local actor and comedian Tom Chalmers six years ago. Each month has a theme, this month’s being, “It’s My Party and I’ll Die if I Want To: Fond Memories of Funerals, Wakes, and Memorials.”
The show takes place at 7:30pm on Thursday, May 28 at 35 Below under Asheville Community Theatre (ACT) on Walnut Street. Tickets are $15 and may be purchased online.
Given his penchant for storytelling, “Listen to This” is best described by Tom Chalmers himself:
Joseph Barcia: How long has your “Listen to This: Stories in Performance” series been going on around town?
Tom Chalmers: We shall celebrate our sixth anniversary in 35 Below at the start of the summer. I had produced this series in LA for three years at The Scared Fools Theater Company before coming to Asheville. The show found a home at 35 Below when a group dropped out of a commitment to do some summer shows there. ACT was looking for a quick replacement with little overhead and minimal load in. I mentioned that I had done a storytelling series in LA that really only needed a stage, a stool, and some lights. They said yes and have been enthusiastically saying yes every month ever since. Susan Harper and Jenny Bunn have both been amazing advocates for the series and the widely differing episodes that have been offered on that stage. Most are funny, some are serious, and some are just downright strange. I often say on stage that each month as the producer I get nervous things just won't come together this time. And yet somehow at the end of each show, I am convinced that it was the best one yet.

Joseph: How has the project evolved?
Tom: Over the years, the format of the show has stayed mostly the same, but the entertainment value has greatly evolved, due in large part to the incredible number of remarkably talented storytellers in this town. Much like other storytelling shows like NYC's "Stories at The Moth" or LA's "Sit 'n' Spin," each show has a different theme and a handful of chosen presenters share a story or song that somehow relates back to that theme. I not only produce the series but also host the shows. I do not claim to be selfless in all this. I love me being on stage talking about me, and this show gives me a great opportunity to do so. Surrounding myself with outstanding storytellers and singer-songwriters just makes it a little less conspicuous.

Joseph: What’s your favorite “Listen to This” memory?
Tom: I loved the episode we did on fighting City Hall. I was all ready to blow off some personal steam about the poor handling of the Pack Place fiasco but it seemed not so important when same-sex marriage advocates Elizabeth Eve and Kathryn Cartledge got up and told the story of getting arrested for daring to request a marriage license at the Clerk of Deeds. They were so eloquent and even-tempered. No bells and whistles, just a powerful tale of injustice. They were remarkable. They were the epitome of one of our slogans: Real people telling real stories. That inspired an evening we did recently of couples co-telling the tale of meeting each other's families for the first time. Very funny seeing how two people who lived the same experience could remember it so differently. Scar stories was a weird show as are most of our Halloween themes. And then there was the wedding photographer who told his story in a full bridal gown. Now that was an entrance!

Joseph: What should audiences expect from the May installment, “It’s My Party and I’ll Die if I Want To”?
Tom: Fond memories of memorable funerals, wakes, and memorials. Local playwright Waylon Wood will be telling a story as he has done more than anyone other than me over the years. His Southern Gothic style always manages to have the audience hanging on every word, anxiously waiting for him to finish taking his well-timed sips of water. We will also be featuring a story and songs by local filmmaker Rod Murphy, who never disappoints with his tales of trouble and the songs that were born from it all. I will be interviewing my brother, Tim Chalmers, who is a funeral director, for some inside perspective on the topic. There will be a few other featured presenters and the audience can expect to leave the theater arguing over what their favorite story was and offering a few of their own. And of course there will be me onstage talking about me.

Joseph: If someone in the audience thinks, “I want to do that,” how can she or he do so?
Tom: I find storytellers through an ever-increasing e-mail list and personal solicitations, but interested parties can always go on ACT's website to see the themes for upcoming shows and then reach out to me about getting involved.