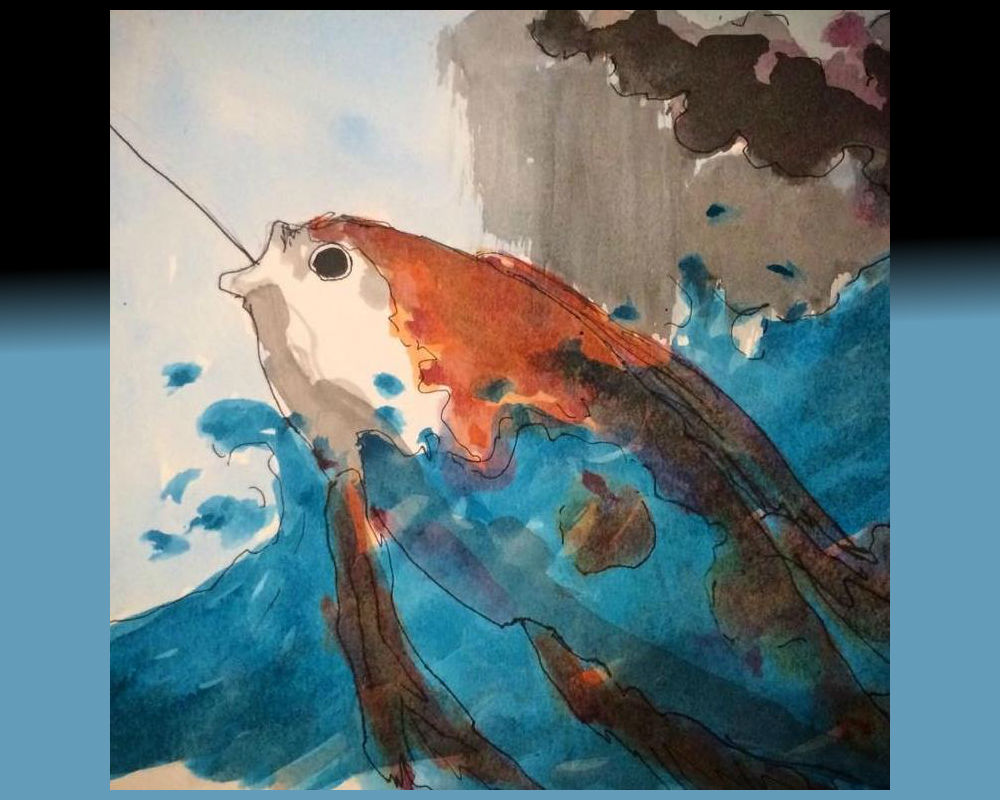 "You throw a line through unseen intercepts / That finds me when I'm too far gone to save." Watercolor: Brandon Beeson

Asheville group the Jeff Thompson Giving Trio is coming to the Altamont Theatre on Saturday, September 3rd. The night, which will feature special guests, will also be the first in a new style of live performance that Jeff Thompson and his band is bringing to stages across town. This live show and future events will include visual and movement pieces that will accompany the set. The show starts at 8 pm, and advance tickets are on sale now for $12 ($20 VIP).

Thompson is well known around town, and has been the three-time recipient of Best Local Singer-Songwriter & Acoustic/Folk Musician in Asheville (via the Mountain Xpress). Although he's had an accomplished solo career as a guitarist and vocalist, he prefers playing as part of a band--specifically with the Giving Trio (which includes Aaron Price on keyboard and vocals and James Kylen on drums and percussion). "We've been playing together for four years, and this is the tightest the trio has ever been," says Thompson. "Even the first rehearsal was good because the members are all so talented, but now we've been playing for a few years with regularity and there's starting to be a delicious level of telepathy between me and the other guys in the band."

This telepathy allows for improvisation and evolution--not only in practice, but also during live shows. "Someone will decide to do something radically different, change up the feel of a song," says Thompson, "and almost quicker than the audience can detect it we morph to whatever that person's doing and the whole song changes. That is one of the most satisfying things about playing music for a long time with the same people: It's different every time, it keeps us on our toes and keeps the songs fresh. That's one reason I really prefer playing with a band over playing solo. I don't surprise myself as much, and the songs can be a little bit fossilized."

The band's sound is a playful mixture of tightly rehearsed arrangements and playful improvisations that reference a spectrum of broad influences, including jazz, rock, pop, soul, and folk. The Trio's signature style resonates with people from all walks of life, including, it turns out, visual artists. "A local artist, Brandon Beeson, was coming to our shows fairly regularly and doing beautiful watercolor portraits of the band," says Thompson. "I was so impressed with his work that I asked him to illustrate one of my songs, and he's been working for a while now on painting these really exquisite watercolor representations of song lyrics."

The first song Beeson illustrated is called "The Greatest Riddle," which Thompson wrote in response to a challenge issued by Price. "My keyboardist Aaron Price asked me to learn this Bach piece, Bach's 'Invention No. 13 in A Minor.' He asked me to learn the right hand of the piano on guitar. It was a challenge, but I learned it. It took me about six weeks to really learn it, and I put so much effort into it that I wanted to use it on stage, so I wrote this whole song around it where I chopped up the Bach and put lyrics to some of it and added a reggae groove."

Beeson's images capture the feel of the song beautifully. They're evocative, enchanting paintings that push audience engagement with the song a step further. 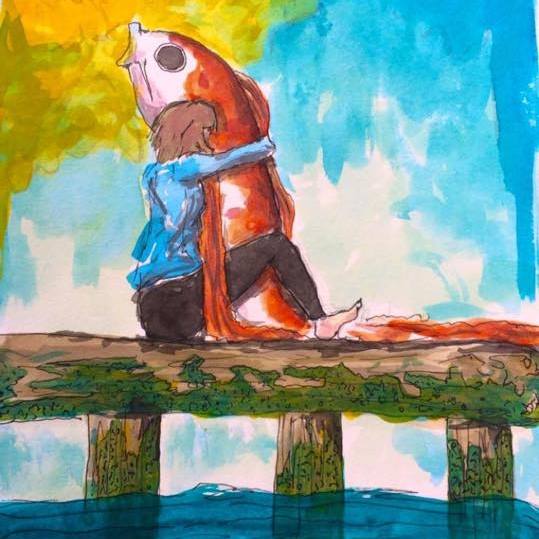 "You reel me to the surface, where I gasp- /A breath equal parts oxygen and shock." Watercolor by Brandon Beeson.

Two dancers will also perform a choreographed piece alongside the music. Thompson has built shadowboxes for either side of the stage, and the dancers will perform in silhouette in the shadowboxes while the watercolor images are projected behind them and the band on the wall. Thompson has a big goal for the arrangement, noting that he's "hoping that will be the jumping-off point to make a good video for the song."

Eventually, Thompson wants to create a multimedia show, where images and songs are linked throughout the set. One way he'll approach this is by booking more shows at places like the Altamont, true listening rooms that invite audience immersion in the performance. The visual aspect of the show will become increasingly important. "Earlier this year I was driving for Uber," says Thompson, "and I had the opportunity to drive the guy who does lights for the Grateful Dead and Widespread Panic. I realized as I was driving him around and mentioning him to fans later that the light show is as big a part of those concerts as the music. He's a member of the band, not just some guy that does the lights; he's as much a part of it as the guitarist. These bands play live as visual things happen around them.

"I just want to begin to approach that in really humble ways," he continues. "Like with one song, some choreography, the watercolor paintings. We have another show at the Isis on November 13th, my birthday, and at that show maybe we'll do three more songs like that, and we'll eventually have a whole show with this visual component, so it's more of a theatre experience. Musically the songs are strong, and I just want to take things to another level in terms of the other senses. Maybe I'll burn incense or have a crockpot on stage [laughs]."

The show happens on September 3rd at the Altamont Theatre in downtown Asheville. T-shirts with Beeson's watercolor prints may be for sale, and there might be some special guests as well (Thompson notes, "I have some surprises up my sleeve"). If you get advance tickets, you'll also be automatically entered to win prizes during drawings that will happen throughout the night for band swag, including shirts, stickers, and CDs.