A History and Vintage Looks

A History and Vintage Looks

Beauty was originally considered a gift from the gods and it brought power and influence for those that looked more attractive. Because of this, people have taken drastic measures to become more beautiful. The most significant example of this is probably the ancient Greeks who used lead face paint and a derivative of arsenic to remove their body hair. The ancient Egyptians were a little more savvy with the ingredients of their makeup. They used a lot of plant and animal based ingredients. The only lead they used was in the kohl they made to line their eyes - the lining of the eye was used by both men and women to ward off the evil eye.

Makeup dropped in popularity tremendously in the Victorian era. Makeup during this time was seen as something only fit for prostitutes and the theatre.
It didn't change much as we moved into the Edwardian era, but in 1910 Max Factor cosmetics started making makeup that was more convenient to apply and cart around in contrast with the greasepaints that proceeded it, the Pan-Cake makeup was in a compact that women could keep in their purses and reapply throughout the day.
By the 1920s, makeup popularity was growing and women were applying lipsticks in deep shades of red as a gesture of liberation from the Victorian and Edwardian eras. Facelifts were also born around this time, more common in France, women sought them out secretly in America. The bow lip shape was the desired lip shape of the 20s. Beauty salons began to pop up and salon treatments became popular. "By 1925 it was estimated that American women alone spent a staggering $1 billion on beauty products (Vogue, 18)."
The Great Depression of the 1930s seemed to only feed the desire women had for makeup. Now, there was this glamorous escapism that could replace the dark days of the depression. Also, thanks to Coco Chanel, makeup was being worn to match the outfit and not the skin tone so the possibility seemed endless. Before this, eyes were lined heavy with kohl, but in the 30s it became more delicate. Mascara was used heavily on the upper lashes, leaving the bottom lashes untouched. Eyeliner was traced from the tearduct in an upward triangle. The bow lip shape was replaced with a more horizontal shape, popular lip colors were dark red, maroon, and rasberry. A healthy outdoor look replaced the alabaster complexion. Style icons of this time were Gloria Swanson and Greta Garbo.
Escapism was also the word of the 40s, limited supplies left little alcohol for perfumes, little fats for lipsticks, and little or no plastic for packaging. Makeup that women could find or afford was coveted and cherished. Eyebrows were plucked and then brushed over with a matte shadow, lips were a bright red to keep up morale, shadows with in muted natural tones, a light hairline liner lined the the bottom lashes while the top lashes were heavily coated in mascara. Leg makeup was used at this time to trace a line on the back of the legs to give the illusion of stockings - which were scarce and expensive. Style icons were Bette Davis, Lauren Bacall, and Rita Hayworth.
It is my belief that the classic look of the 40's will be big this fall. When I asked the stylists at Adorn what they liked the most about the fashion of the 40's, Jeremy said he liked the seemingly simple structures of the hair that was worn then. Holiday said he liked the classic men's cuts with length on top that is slicked back with wax or pomade. Boardwalk Empire's character Jimmy demonstrates this style pretty eloquently:

Rebecca Hecht said, "I love the 40's era beauty because it expressed both a sense of innocence and glamour. The sweet and simple eye makeup paired with the red lip is such an iconic moment in fashion and represents a golden era in history." A brilliant example of what Rebecca is referring to is shown below in this classic picture of Lauren Bacall: 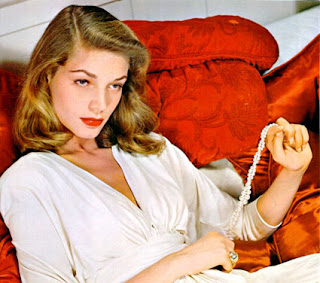 Here are some classic vintage looks we have done at Adorn: 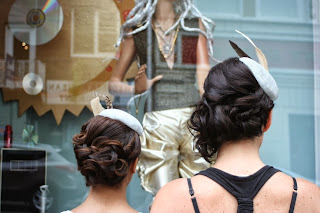 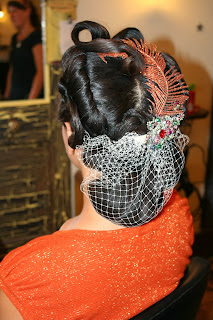