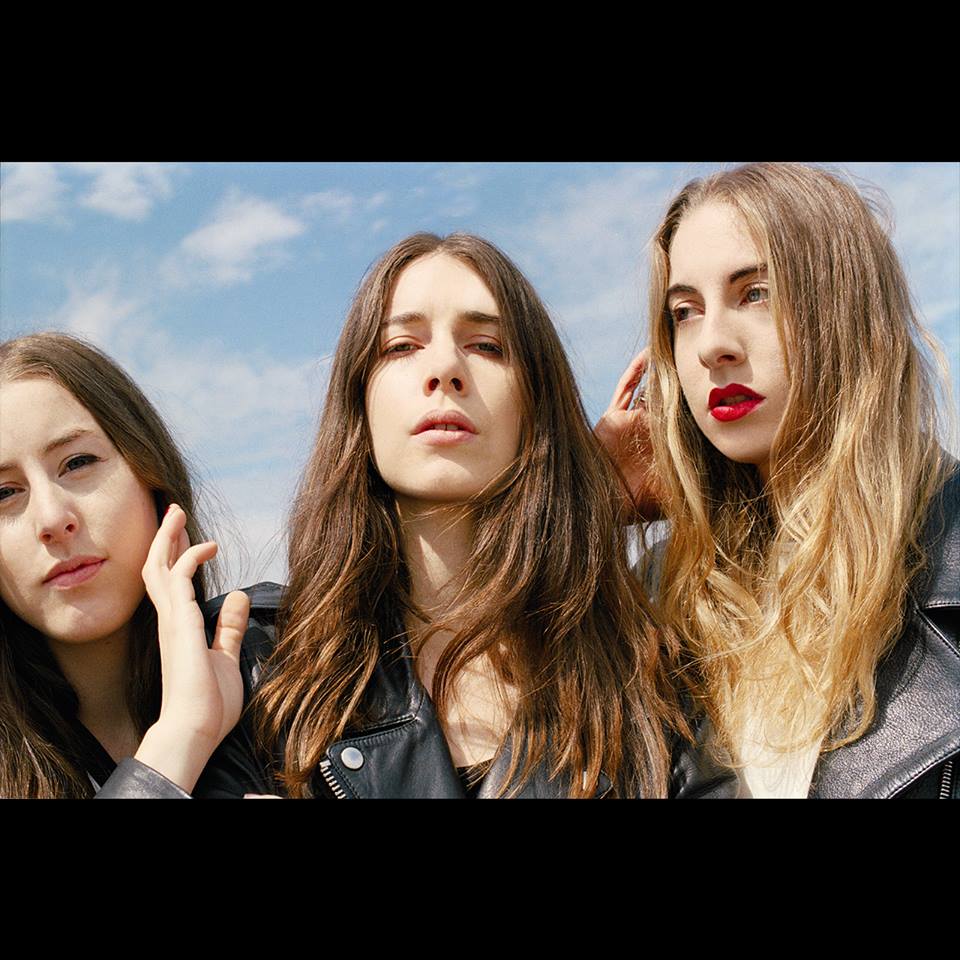 My beau and I arrived at the sold-out show at the Orange Peel Wednesday night just as opener Bibi Bourelly was wrapping up her set (sad to have missed that). A couple of beers and a short pop-music-filled wait later (I felt like my own personal opening act was the group of folks next to me getting down to Beyonce’s “Sorry”), the sisters of Haim came onto the stage to the roar of the Asheville crowd.

Alana, Danielle and Este Haim have that understated California cool aesthetic of red lips, long hippie chic hair with dark roots, and a general vibe of “I came to get down – or rock – or both.” Danielle greeted the excited crowd with a couple of F bombs (F yeah Asheville!), the stadium-style stage lighting swept across us, and they launched into “If I Could Change Your Mind” off of their album, Days are Gone.

If you’ve not heard Haim’s music, it’s a mix between the best synthesized pop of the 80s, some R&B, and a sprinkling of rock. I wondered how it might translate into a live concert since much of the vocals on the Days Are Gone album are breathy and low, like the personal story of your friend’s bad breakup or one of those well produced electronic pop songs you can’t really imagine sounding good live.

But with Alana on percussion, Danielle on lead guitar and vocals, and Este on bass, it translated into something that sounded pretty much just like the Days Are Gone album I obsessively listened  to all last spring in my car--and also like something bigger and badder. So basically, I’m saying it translated just fine, thank you.

And when I say those sisters came to rock, I mean it. I spent half of the show transfixed by Este, the blonde-haired older sister who rocked the bass guitar like a dude in a metal band, facial expressions and all. A couple of songs in, she honored her “idol” Prince and his recent birthday (and death) with a solid, sexy cover of “I Would Die for You,” complete with purple lights.

There wasn’t a lot of talking between songs, but lead guitarist and middle sister Danielle gave Asheville the props we love to get. She told the crowd how she’d been prepping her sisters on tour: “Just wait 'til we get to Asheville” (she’d played here in the past with Jenny Lewis of the band Rilo Kiley). Other than that, the Haim sisters rolled into song after awesome, tight song, backed by two guys in the shadows on keyboard and drums.

They played a couple of new songs they’d been working on back in LA for their next album, but mostly performed crowd-pleasing versions of almost everything from the Days are Gone album. Alana (Baby A, as Este called her) broke out a slow, intense version of  "Running if You Call My Name,” asking the crowd to back her up with the refrain. Nothing like singing “Hey, ho, ho, ho” meaningfully with a bunch of strangers to feel connected.

Like Alana said toward the end, “We’re a family now. We sang together, we danced together, now we’re gonna get funky together.” Awwww! But, true. The show ended with Alanna asking us all to “get low” and then “get high”, basically setting the stage for a dancing, jumping, fabulous frenzy of a finale.

When they left the stage, of course, we all knew they’d come back for an encore. But wow – what an encore. Roadies brought three drum sets to the stage and the last song was those three sisters, jamming out together on the drums. Each of them, on a drum set. It made me think about sisters and music and what it must be like to connect that way, growing up playing music in the basement with each other and now on the road, from opening for Taylor Swift to rocking out in smaller venues like the Orange Peel, to playing at Bonnaroo (their next stop after Asheville) and the badass bonds they have formed. You can feel it and see it in their live show.

Definitely get your tickets early next time they come to town.  You don’t want to miss Haim.